The value of asset impairments recorded by under-pressure North American upstream producers exceeded $100 billion during the first half of this year, due primarily to pandemic-related drops in oil demand and per-barrel prices.

This dramatic increase in impairments of property, plant and equipment (PPE) is based on an analysis of second quarter financials by Evaluate Energy, based in London, UK.

A study of 129 companies (see note 1) illustrates that a further $19.7 billion in impairments was recorded in the second quarter, adding to the sudden $82.4 billion recorded in first quarter results by producers after oil prices crashed in mid-March.

For reference, the same 129 companies only recorded $42 billion in impairments between them in the whole of 2019. $10.8 billion of this total (~26%) came from Chevron alone, related to its Appalachia shale and Big Foot assets in the U.S. and Kitimat LNG in Canada. 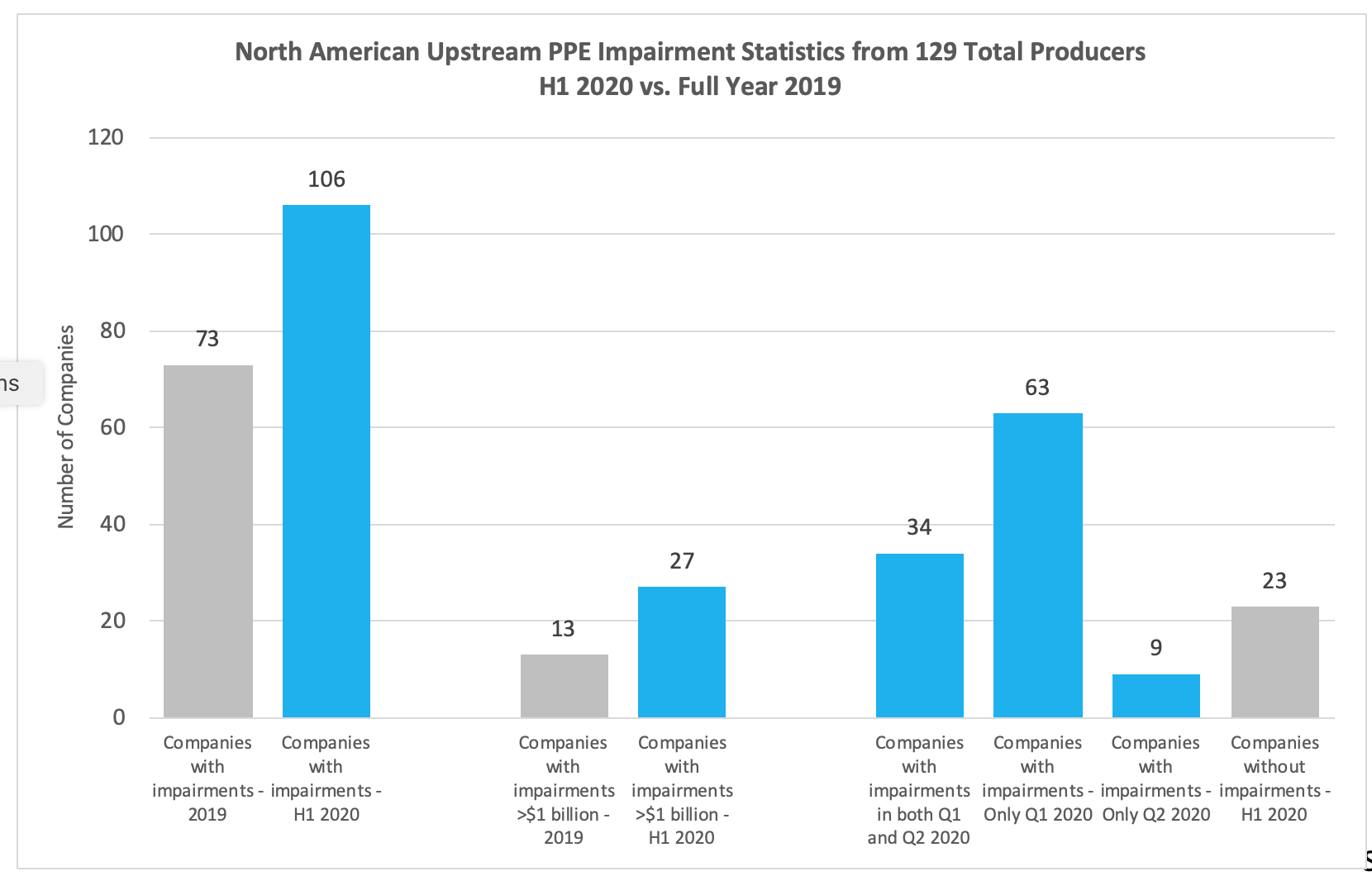 “This $100 billion in asset impairments is obviously a significant figure and such a drop in asset value is hardly going to endear producers to the market at large when it comes to attracting investment,” said Eoin Coyne, senior analyst at Evaluate Energy.

“The timing of the initial sudden price crash meant that Q1 results predictably saw by far the greater levels of PPE impairments. A further 24% increase in these figures after further re-evaluation in Q2, however, shows that things have become even tougher for the 43 companies involved.”

“It remains unclear as to whether any of these impairments will be reversed as 2020 continues. Oil prices did recover to a consistent average of over $40/bbl but have dropped back below this value since the end of August.”

Coyne added: “It is also important to point out that it is just PPE assets we’re talking about here. This first six months of 2020 has also seen major widespread asset write-downs on the exploration and evaluation sides of the industry, massive inventory write-downs and significant levels of goodwill impairments that all have had an impact on balance sheets across the upstream space.”

Evaluate Energy’s financial and operating database allows deeper analysis of all impairments and asset write-downs, as well as other impacts of the demand crash and price downturn, including hedging-related gains and changes in debt. All this information is accessible on an individual company-by-company level and downloadable to Excel. Click here for more information on our products.

The 129 companies were made up of U.S. or Canadian-based companies with at least some production in either country. All companies produce over 1,000 boe/d in total and they all recently reported a second quarter report for the three- and six-month period ended June 30, 2020.

Memo  To: Doug Schweitzer, Minister of Jobs, Economy and Innovation From: Bill Whitelaw, Passionate Albertan privileged to work in the energy and…

Democrat Joe Biden's remark that he would “transition'' away from oil in the U.S. in favour of renewable energy drew…

Vestas Wind Systems A/S, the world’s biggest wind turbine manufacturer, will buy out its offshore joint venture partner in an…