Which companies are best positioned to weather the COVID-19 storm and emerge strong on the other side?

“Larger and integrated companies will survive and prosper. We have already seen they can raise capital in tough times,” says KPMG’s National Energy Leader Michael McKerracher. “There will always be a spot for specialty E&P companies in smaller pro table plays and basins. The smaller juniors are at risk. The junior of the future will have more production, specialized skills, and may even be internationally focused. “

The integrated business model, with operators owning production, refining, and even retail assets has stood the test of time, he says. When heavy oil differentials exploded prior to the Alberta government limiting production in 2018, Canada’s integrated operators were some of the few companies that remained pro table.

Suncor president and chief executive officer Mark Little says being a large integrated company has worked well, and he expects that to continue through the current downturn.

“Throughout the North American shale boom and the subsequent oil price collapse and the Fort McMurray res in 2015 and 2016, we demonstrated the importance of financial discipline through our ability to significantly scale-down costs,” he said.

“And now, looking forward from today, we have confidence that we have taken the right measures to ensure Suncor will continue to weather the storm. Suncor's competitive advantages of an integrated physical connection to the consumer, sophisticated marketing, logistics and infrastructure capabilities and always maintaining our financial strength will allow us to emerge stronger than ever.”

Scalability is one of the key advantages large producers have in dealing with market volatility, he explains. When prices drop, large producers can cut capital expenditures, focus on their best assets, and shut-in in less economic production.

CNRL is reducing well servicing activity and shutting- in higher cost production at its conventional oil operations. It is temporarily lowering production at its thermal oilsands assets. In total, it is targeting around 74,000 bbls/d of production.

“So what we did is go through the year looking at all items and asking what is potentially deferrable and what is not even really needed in this type of environment,’” explains president Tim McKay.

McKay says the company’s ongoing strategy is to be “ flexible and efficient.” Its ability “to be nimble,” allows it to capture opportunities during the current brutal market conditions beget by the COVID-19 pandemic. “Our strategy is simply to optimize capital allocation to maximize value for shareholders. Our teams are focused and continue to drive efficiencies across the company.”

Having a balanced portfolio between oil and gas can also help in challenging times, says McKerracher. He points to the 2009 separation of the Encana into two companies—oilsands company Cenovus and natural gas company Encana—as an example of what can happen when companies put their eggs in one basket. Both companies saw evaluations decline and ultimately moved to increase their gas and oil holdings respectively to improve their viability.

“Being more balanced can flatten out some of the cycle. It gives you the ability to change focus but you have to be big enough to afford to have the specialties in each commodity,” he says.

Larger gas-weighted producers are leveraging the scalability and diversity of their assets to manage market volatility. As gas prices eroded in the first quarter of 2020, Peyto Exploration and Development Corp. decided to slow its winter drilling program and defer some capital expenditures.

“Then in March, of course, the oil price crashed on the demand impact due to COVID-19, and we had the price war between Russia and Saudi Arabia, where they were threatening to flood the market with a whole bunch of production,” says company president and chief operating officer Darren Gee. “We had to completely reassess our drilling plans for the year in light of the impact to our economics that those commodity prices brought.”

In the November through April period, it ramps up gas production to as much as 30,000 boe/d, with production being reduced to one-third of that during the summer. It’s an approach that has allowed the company to remain pro table in a difficult environment for gas prices.

“We have 29,000 boe/d of capacity, but we don’t sell our production at a loss,” says Ken McCagherty, president and chief executive officer.

Other small companies are looking international to survive and thrive, says McKerracher. “There are a number of basins around the world not exploited or commercialized. There is real value to be captured in these international jurisdictions. We have some of the best technologies in world in exploration and production and can take expertise to other locales. That’s where the junior space will survive and prosper in the international realm.”

Colombian producer Canacol Energy is one example of seizing this opportunity.

After starting as a South American oil explorer 12 years ago, the company switched gears in 2014 to focus on Colombian gas. It has since built out its 2P reserve base by 666 billion cubic feet (559 bcf net of production).

With Colombia experiencing a supply deficit, Canacol’s shift to gas production was timed perfectly. The supply shortfall is growing on Colombia’s Caribbean coast near the company's producing assets. Demand is presently at 425MMcf/d and forecasted to increase at three per cent per year. Current supply in the region matches demand, but competitor production is in terminal decline, allowing the company to become Colombia’s largest independent gas producer.

Over the last four years, Canacol has partnered with a Colombian midstream operator as well as built its own pipeline to increase shipping capacity to the Caribbean coast. The company is now considering options to construct an additional pipeline to ship its gas south to new markets in the interior of the country by 2023.

Canada’s oil and gas industry is at an inflection point. After five years of wild price volatility, market access issues, and other challenges, it now finds itself in the midst of a pandemic that has driven demand to lows not seen in decades. 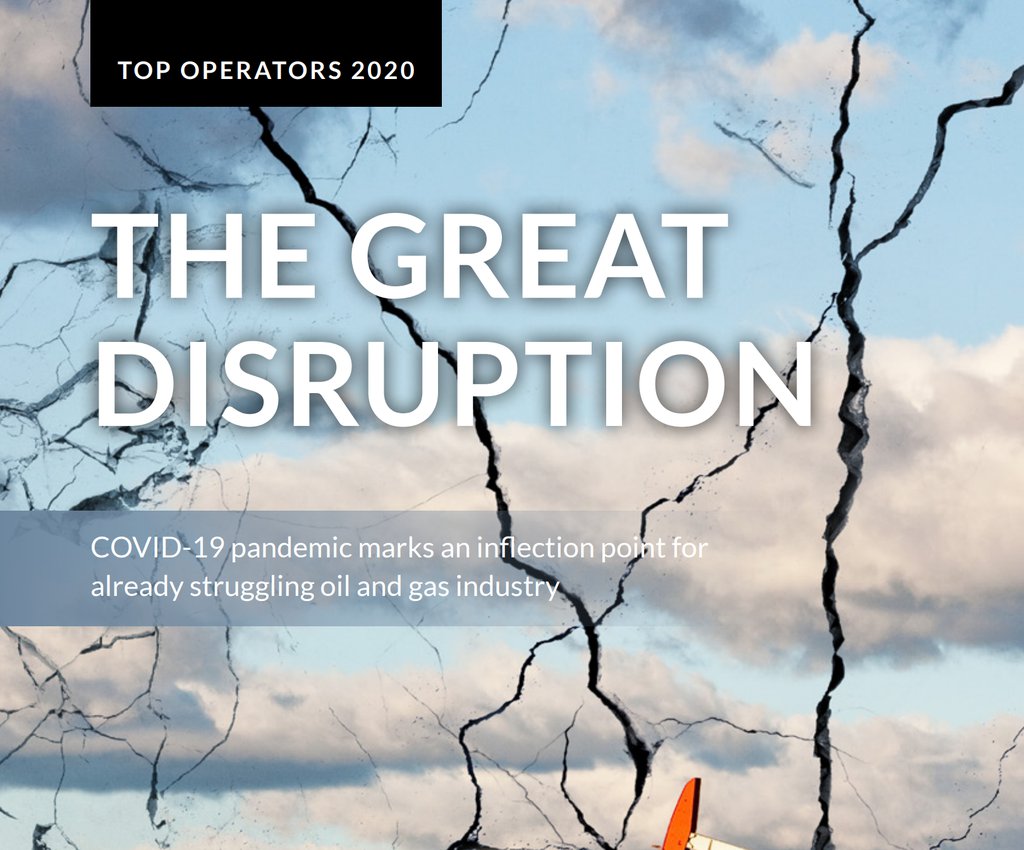 This year’s Daily Oil Bulletin Top Operators report reflects the great uncertainty facing the oil and gas sector and tries to make sense of what the industry and successful operators in the post-pandemic future will look like.

To do so, we made some changes to the Top Operators format.

Rather than comparing year-over-year data, in some instances our CanOils analysts compared first quarter 2019/2020 data to measure the impact of the early stages of the COVID-19 pandemic.

We also tapped into the experience of professional services firm KPMG to gain insight into what strategies operators and service companies could pursue to survive and thrive through the difficult days ahead.

Further, we leveraged the reporting power of the Daily Oil Bulletin staff and its ongoing coverage of the industry over the last four months to capture the industry’s response to the pandemic and its future outlook.

Nominate a rising star in the oil and gas industry. Nominations close on August 21.