This analysis was conducted using Q2 2020 operating and transportation expenses per bbl (production costs) for the most heavily gas-weighted, publicly listed producers in Canada and the United States.

Low cost production is just one key indicator that investors and industry observers will be looking for to identify healthy gas producing companies in the current climate.

The most recent production cost data and key conclusions are presented below. 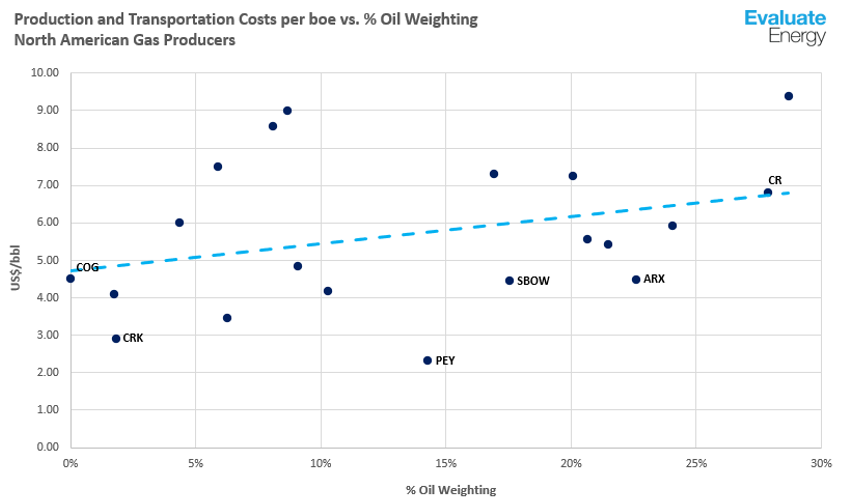 Overall portfolios must be considered

The trend line on the chart, calculated using the production costs of all companies in the group, shows that as oil weighting increases, so does the average cost per boe to produce for each company.

Therefore, if one company was producing at US$2/boe higher than another this might not make it a “higher cost operator.” It may be because oil makes up a higher proportion of its portfolio.

To illustrate this we examined costs reported both by Cabot Oil & Gas (COG) in the U.S. Appalachian Basin and Crew Energy Inc. (CR), a Montney-producer in Canada.

Examining costs per boe alone can be misleading. When deciding if a company is a producer with high production costs, these metrics must be considered relative to the company’s overall portfolio.

Based on the combined metrics of costs per boe and each company’s oil weighting, we have identified the lowest cost producers based on Q2 2020 data.

Comstock Resources (CRK) was the lowest cost U.S.-based producer of the group at US$2.91/boe. Only two companies (Cabot and Goodrich Petroleum) produced a lower level of liquids relative to their portfolios. While Comstock hovers around US$1.50/boe below the trend line, the majority of its low costs can be attributed to the high natural gas weighting of its Texas and Louisiana production base.

After Peyto, the next furthest from the trend line in terms of low costs is Canadian producer ARC Resources (ARX). Its Q2 2020 production costs in the Montney and Pembina Cardium of US$4.50/boe are around US$2/boe below the expected costs for a portfolio comprised of 23 per cent liquids.

Of the remaining low-cost U.S. producers, Eagle Ford-focused Silverbow Resources recorded production costs of US$4.45/boe in Q2 2020, a comparable distance of around US$1.50/boe from the trend line to Comstock Resources.