Alberta Premier Jason Kenney has suggested to Quebec that pipelines would prevent events like the recent propane shortage caused by the CN Rail strike.

The lack of propane hampered harvest for Quebec farmers, and endangered users of propane heating in seniors residences, hospitals and mobile homes.

This gas can be produced by conventional oil and gas drilling in North America and elsewhere. But most growth in recent years has come from horizontal or directional drilling and hydraulic fracturing, which is commonly given an umbrella term for a whole array of processes: fracking.

Quebec is believed to host more than 155 trillion cubic feet of natural gas locked in shale formations, of which about one-fifth could be recovered, according to a story in the Globe and Mail from 2014.

The Canadian Energy Research Institute in 2016 speculated that production could reach one billion cubic feet per day, and thus satisfy much of the province’s gas demand. There would be significant NGLs associated with such gas, including propane.

The province imposed a moratorium on new fracking efforts and has not issued any new guidelines to allow oil and gas companies to resume exploration, which is now declining.

Instead, Quebec imports natural gas from Western Canada and the United States. The American gas, particularly, is produced by fracking and the gas arrives via pipelines. Quebec’s oil refineries now mostly use Western Canadian diluted bitumen, supplied via pipeline.

Quebec Premier François Legault has said that there is no “appetite” in Quebec for another oil pipeline. But he has also said he’s receptive to more gas pipelines.

There seems to be little chance of assuring Quebec a secure, uninterruptible supply of propane – a constituent of NGLs but rarely transported by itself – unless one or more of these possibilities occur:

Quebec’s restrictive policies on pipelines, fracking and anything that introduces the slightest amount of risk to the environment – which is anything and everything that humans and companies do related to technological or industrial methods or development – greatly reduces its choices. It’s also limiting what can and will be possible to supply propane.

Fracking hasn’t been shown to be environmentally harmful, and it has created the abundance of cheap natural gas in what is now called the Shale Revolution.

Pipelines aren’t perfect, but they do transport vast quantities of oil and NGLs with few serious accidents.

Quebec shouldn’t let the perfect be the enemy of the very good. A broader perspective will allow free enterprise to find a solution to the province’s propane supply vulnerability. 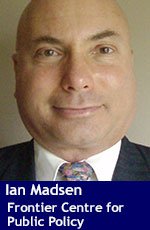 ​Why we must get Canadian energy to global markets
Canadian opinions on energy not as polarized as you might think: Survey
Oil-rich Abu Dhabi is helping Spain become a green powerhouse
Oil set for weekly gain as China eases curbs before OPEC+ meets
Oil fluctuates as traders look to China shift, OPEC+ meeting
Canadian Natural Resources plans $5.2 billion in capital spending in 2023