A new Canadian law that will make it extraordinarily difficult to convey our most valuable export commodity to market is proving to be a winner, but not for us.

From nearby Anchorage to far flung Caracas and Tehran, the oil tanker ban affecting only the north coast of British Columbia is creating trade opportunities. Unfortunately, they are not ones benefiting Canada.

The potential for this to be the outcome of Bill C-48, which bans seaborne transport of Canadian oil on the north coast of British Columbia, was quite obvious to many in the West in recent months as the new law was being rammed through despite the unprecedented objections of the Senate committee that reviewed it.

A long line of industry and Indigenous representatives had gone before the transportation committee to explain the potential utility of a north Pacific port that at some point in the undefined future could be a transshipment hub for a type of product that arrives on the east coast of the country by the shipload on a routine basis, from foreign dictatorships, without causing a moment’s concern.

But no, that is not acceptable to lawmakers for whom murder oil from Saudi Arabia is a bland necessity and the Alberta oilsands a shady enterprise to be extirpated as firmly and quickly as possible.

Nisga’a president Eva Clayton, whose leadership presides over the majestic Nass River that drains into the Pacific north of Prince Rupert, was among the First Nations who asked for a carve-out that would allow the potential for a tanker route well to the north, away from the delicate ecosystems adjacent the Great Bear Rainforest.

Said Clayton: “We believe that there is a way forward, using the positions of the Nisga’a Treaty in conjunction with Canada’s robust regulatory processes, to allow Canada to achieve the objectives of the proposed moratorium without interfering with the Nisga’a Nation’s rights under the Nisga’a Treaty.”

Not only was the idea rejected, Clayton’s goal for her nation to be unhindered from pursuing economic development was brushed away by the transport minister himself with a contemptuous aside about First Nations engaging in commerce.

Numerous briefs submitted to the Senate transportation committee outlined the scale of the opportunity that Canada would be giving up through passing the law. My own presentation, which I delivered in person this spring when senators visited Terrace, focused on the reality of maritime crude oil trade. The fact is that modern oil tanker shipping safety has advanced so far that it bears little resemblance to the Exxon Valdez era that Bill C-48’s backers relentlessly, and in my opinion shamelessly, exploited. Its strong safety record parallels the exponential improvements seen in civil passenger aviation over the same period. Banning tankers from the north coast is just as reasonable as deciding to stop planes flying into Vancouver’s airport because a jet flew into a mountain somewhere decades ago – in other words, it is stupid and unreasonable.

The idea that a tanker ban somehow protects the environment is a fabrication born of illusory thinking. No shipping expert I’ve been able to locate, including in the employ of the federal government itself, has contradicted me on this.

American environmental elitists spent a lot of money in Canada over the past decade to manufacture baseless fears about tankers in the north. They did a bloody effective job. The passage of Bill C-48 is not the only evidence of their success. Earlier this week, in the comfort of a downtown Toronto office, I had the experience of listening to a policy executive patiently explain to me that he had once kayaked in Vancouver, and consequently he understood why shipping more oil through this long-established port was okay, and why in turn this justified the northern tanker ban.

This is a commonplace mindset in both Toronto and Ottawa today, espoused by fervent world-changers who know everything they need to know and aren’t interested in experts such as those on Transport Canada’s Tanker Safety Panel Secretariat — who on the basis of objective information determined that tanker shipping in northern B.C. would in fact be safer than most of the alternatives — any more than they are interested in hearing from First Nations leaders who are practically on their knees begging for meaningful economic opportunities.

Thanks to such attitudes, scores of Indigenous leaders known to me who had momentarily glimpsed a pathway to economic self-reliance are now left to mull over the soul-destroying effect on their youth of 90 per cent unemployment.

For those who believe the Trans Mountain pipeline expansion to Vancouver is going to be the one-and-done solution to Canada’s market access difficulties, and we don’t need to worry about the northern route, there is something that needs to be understood. Even once the desperately needed southern pipe is laid, additional transportation capacity will still be needed to reach the countries that thought they could rely on Canada for help in shedding energy poverty over the coming decades. We were able to represent this hope because of the billions of dollars invested upstream in recent years to meet that demand.

It truly is an ill wind that blows no good. Gusts of chilly air from the east may have flattened the ambitions of international investors who had held out hopes that Canada would not act foolishly to limit its own potential. Predictably, the self-imposed prohibition is already proving to be a boon for our international friends.

Last month in Saskatoon, I sat in on a presentation by the affable former lieutenant governor of Alaska, Mead Treadwell, who nowadays is chief operating officer of the Alberta to Alaska Railway Development Corp. That is a US$17 billion concept calling for a 2,736 kilometre rail line that will open a portal to international markets for the Alberta oilsands. Railcars would carry oilsands crude to the existing Alaskan port of Valdez, from which it will be sent onward to global markets.

As Mr. Treadwell readily allowed, Bill C-48 is what has given this project its latest boost, aided of course by Ottawa’s decision several years ago to cancel the approved Northern Gateway project.

Canada now having legislated itself onto the sidelines as a transshipment point in the north Pacific oil trade, Alaskans are perfectly happy to receive a healthy slice of the economic stimulus from the oilsands. As Americans like to say: “Y’all come back now!” And speaking of Texas, over the summer we’ve also seen a supertanker loaded with Alberta crude make its way to China from the Gulf of Mexico, once again an instance of sending oil and utilities jobs – the best paying of any industrial sectors in Canada – to a foreign country.

For the next example of Canada’s clumsy largesse, look to dysfunctional Venezuela, where the Orinoco Belt contains rich oilsands deposits that have been developed in recent times using technology imported from Canada.

Last month, in spite of sanctions on oil exports imposed by the United States, the country’s unpopular Maduro regime managed to get 700,000 bbls/d of crude oil onto tanker ships headed, primarily, to China and India. This situation continues even though the receiving countries are under rising diplomatic pressure to change their suppliers. Why don’t they switch?

The problem is that heavy oil is in short supply, a situation that Canada saw coming a decade ago when the Northern Gateway pipeline was proposed, which would have conveyed 525,000 bbls/d of heavy oil in the direction of Asian markets.

Notwithstanding the bizarre and false claim often heard in Vancouver media that there is no overseas market for heavy oil like Canada’s, the ongoing Venezuelan saga underlines what Asian importers will resort to in order to ensure their heavy-oil-reliant refineries do not go dry.

Canada’s doofus act extends beyond Venezuela and the United States. The third beneficiary is Iran, a country that produces abundant medium and heavy oil of particular importance in Asia. 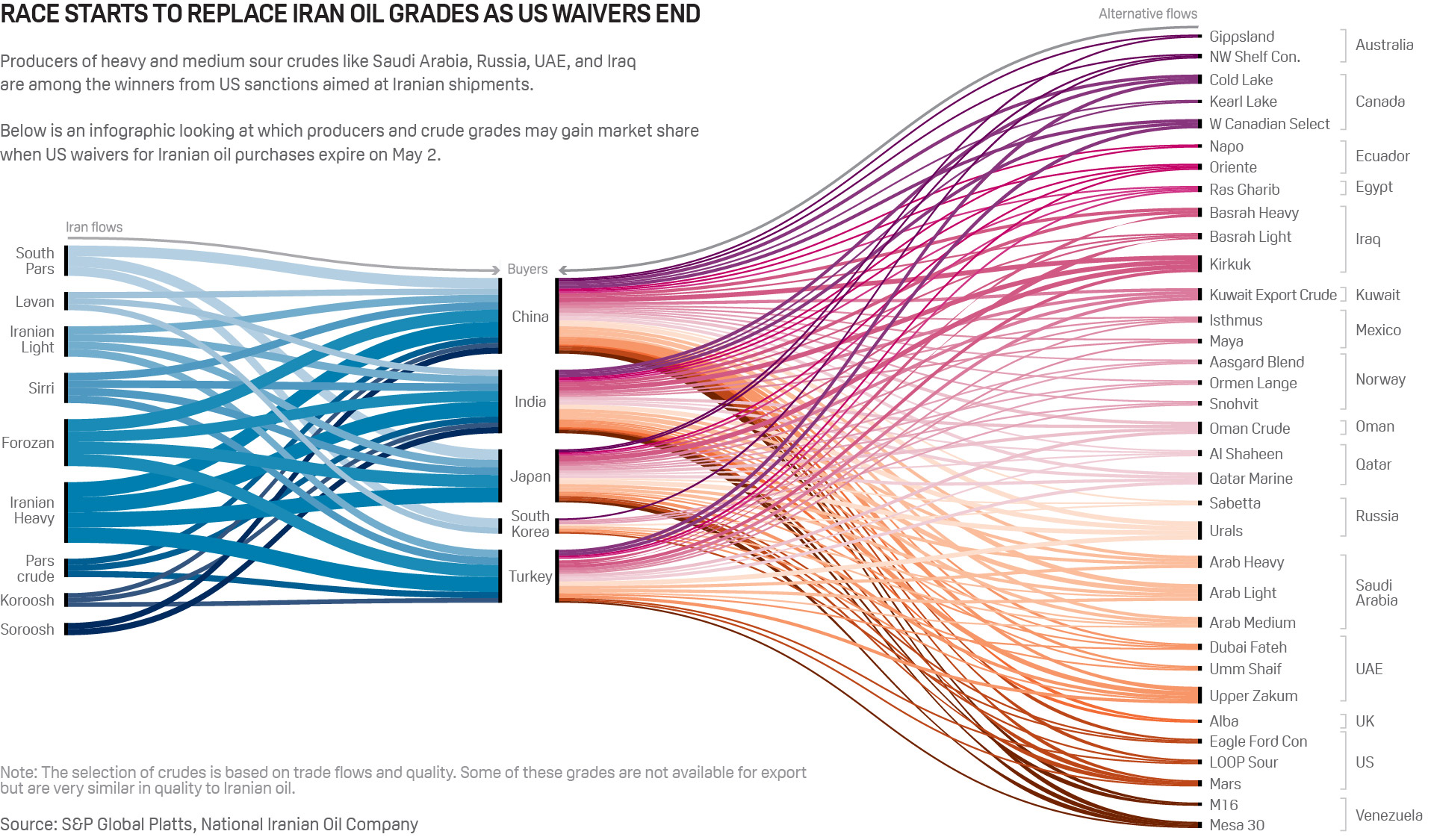 Notice that Canada is listed at the top right, with three specific oilsands blends – Cold Lake, Kearl Lake and Western Canadian Select – singled out as potential replacements, especially for China. Though fascinating, it feels more like a cruel joke that our badly needed yet self-constrained products should be listed here at all.

In the meantime, Iranian oil continues to evade the prohibition via elaborate, clandestine tanker maneuvers. Much of the crude is headed for China, which has just spent years developing the infrastructure to handle it (during the same period when China was making or attempting to make strategic investments in the Canadian oilsands). Tanker Trackers analysts have revealed a steady stream of supertankers in recent weeks headed to the recently-upgraded import terminal at Dongjiakou, where oil is transferred into new pipelines connecting to a range of independent “teapot” refineries in the cities of Weifang, Dongying and Binzhou.

One way or another, China will get the energy it needs. Whether Canada is going to be a permanent marginal player in this, or something more, remains to be seen. The one grace note in the passage of Bill C-48 is that it can be reviewed in five years.

Aside from the actual trade implications now unfolding in real time, the bill’s impact is already being felt in the fabric of our nation. By affecting only Alberta crude, C-48 is the factor most responsible for renewed talk of western separatism. Those trying to pin the blame for that on Alberta’s new premier as if it were a characteristic of his political philosophy have short memories. These are the words of Jason Kenney’s predecessor Rachel Notley, spoken on April 9 before the Senate Transportation Committee:

“In the time I have, I want to give you three very clear reasons why this bill needs to be rejected. First, it’s bad for jobs and investment, plain and simple. Second, it’s not a tanker ban; it’s an Alberta ban. Let’s stop suggesting otherwise. Third, if you continue to push policies that single out provinces in their impact the way this one does, it is a policy that is effectively very divisive. It is the kind of policy that, as we say in Alberta, represents little more than what we often characterize as a ‘stampede of stupid.’ Ultimately, you’re going to hurt our country and our sense of unity. [Emphasis added.] Those are the stakes.”

Smooth move, Canada. Thanks to an otiose law that is benefiting Venezuela and China today, and could create lasting advantages for Alaska in future, we have stirrings of a national unity crisis.

The leadership that Canada could exert in global affairs, for example by showing tyrants in Iran and Venezuela that the world has other options than their oil, would have considerably more heft if we had followed through on the promising early and medium stages in developing one of the world’s greatest – and, in climate terms, most improving – energy assets.

For the time being, it seems we are destined to remain a place of unfulfilled promise. 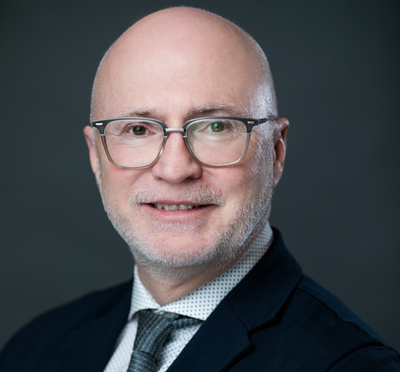