We are witnessing a profound change in conventional exploration’s long-held role to replace and to renew resource.

It has always been the industry’s primary engine of growth. But, as the energy transition takes long-term oil growth off the agenda, exploration needs to find a new role.

Our base case oil demand outlook has plenty of room for future exploration. We see a supply gap beyond known fields of 16 million barrels of oil per day (b/d) by 2040. This represents an opportunity for the industry to continue its current rate of exploration spending. With healthy profits from exploration at oil prices above US$50 per barrel, the economic case for exploration under this scenario is compelling.

But the pace and nature of the energy transition is highly uncertain. The world might move more quickly to deeper decarbonisation. Even if this happens, we still see a chance for exploration to successfully re-invent itself and retain an important role.

The energy transition has huge implications for explorers

Because existing fields decline, there is a need for resource replacement. This need lessens as technology slows field declines, and as the energy transition erodes demand. The pace of both these factors is difficult to predict. But whatever happens, a focus on lower risk and lower-cost resources will ensure portfolio resilience.

Peak oil demand is probably less than 20 years away and many undeveloped fields may never be required. Might we already have sufficient reserves in existing fields? Can tight oil supply fill the gap? Will the end of oil demand growth also spell the end of exploration?

The answer to all three questions is probably not: our base case oil demand scenario looks positive for explorers. We expect a call on yet-to-find oil that reaches 16 million b/d by 2040. Current industry spending of around US$40 billion a year looks about right, based on empirical analysis of past discovery rates and future costs. Exploration investment can continue at this level and demand should be met.

But what if environmental concerns lead to demand that is much lower than our base case? Wood Mackenzie’s carbon-constrained scenario is our analysis of how the world can move towards deeper- decarbonisation. This scenario sees existing and viable technology trends accelerate, steering policy to shape far faster cuts to global emissions than those currently envisaged.

So, it is entirely possible that, by 2040, all but 6 million b/d of oil demand comes from fields known today. This would indeed be an existential threat to exploration, for it requires only a small improvement in our underlying field assumptions for that call on yet-to-find volumes to disappear altogether.

The clearest threat to future exploration comes from development and production technologies that boost existing fields. Just a 2% improvement in global recovery factors could add that 6 million b/d

by 2040. Given that we might be on the cusp of a new digital technology revolution – advanced seismic imaging, data analytics, machine learning and artificial intelligence, the cloud and supercomputing – such an improved recovery scenario is hardly fanciful. Conventional explorers must keep their discipline and focus only on the best prospects. 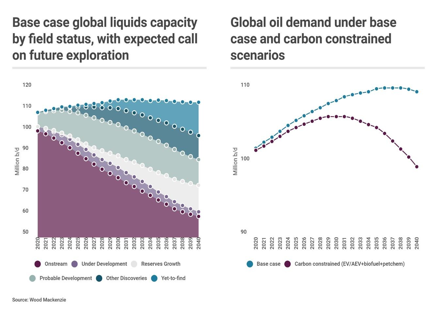 The energy transition for gas is a different story. On an oil-equivalent basis, gas accounts for around half the volumes added by exploration over the past decade. Base case global gas demand grows by

Even under our carbon-constrained scenario, we still model gas growth of 15% over the next 20 years. The explorer of the future is likely to be increasingly looking for, and happy to discover, gas. But only in the right locations. There is already no shortage of stranded gas assets.

Could we see an even deeper green future?

Wood Mackenzie’s carbon-constrained scenario does not go as far as the IEA’s sustainable development scenario (IEA SDS). This limits the rise of temperature to less than 2C above pre- industrial levels. Should the world move towards the IEA SDS, oil demand would nosedive to just 70

million b/d by 2040. Gas demand growth would be limited to less than 10% above current production.

How realistic is this scenario? The IEA SDS makes some big assumptions around markets, specifically:

For these reasons, we view the IEA SDS as unlikely. But it illustrates a possible future where exploration has a very limited role to play.

The energy transition is driving investors away from exploration

Scenarios such as the IEA SDS stoke investors’ concerns about exploration’s future. Once, investors were wary because of perceived poor returns during periods of low oil prices. Now their misgivings more likely reflect the energy transition. This influences company strategies, driving spare cash flow away from exploration and towards increasing shareholder distributions and even investment in zero-carbon energy.

Explorers are caught in investors’ wider retreat from oil and gas, but they are not the only stakeholders with doubts. Public support for the oil and gas industry is fast disappearing in many places, most obviously in Western Europe and in some other OECD nations. Changing public opinions are starting to affect policy.

A new policy trend is emerging, with some governments opting to accelerate a non-carbon future by banning exploration.

The issue of waning public support looms largest for the Majors. They are the industry’s leaders, and as integrated companies, are closer to wider public scrutiny through their downstream and retail businesses.

Firstly, the exploration and development activity itself. The Majors’ growing use of renewables for wellsite power in the Permian is a good example.

Many companies already monitor the carbon footprint of their work and offer executives incentives to make improvements. This steers companies away from the remote and the complex, towards simpler prospects with easier logistics.

Of course, there is a happy alignment with exploration economics here, to the extent that costs and carbon footprint are correlated. But are the carbon gains from such operational improvements really all that material? Probably not.

Which leads to the second issue, the carbon footprint of the petroleum product itself. Progress here demands less heavy oil, more light oil and more gas. Again, the alignment with better exploration economics is often a positive one. This is already the sector’s direction of travel.

It is conceivable that carbon policy creates headwinds for US shale, but this seems unlikely to push much investment back to conventional exploration.

Companies are already investing heavily to get in front of this risk, with gas flaring being a target.

How do explorers tackle long-term uncertainty?

Explorers thrive on uncertainty. Risk is a wildcatter’s lifeblood, with the payoff in the possibility of a higher return. But the new and potentially existential threat from long-term reduced demand is a very different risk.

Since this demand uncertainty increases with time, an obvious strategy could be to seek opportunities with shorter time horizons. A focus on the near-term might point to either infrastructure-led exploration where discoveries can be quickly developed using existing facilities, or to onshore plays where phased or incremental development is often easier.

Such an approach will work for some explorers but is unlikely to work for all. Infrastructure-led exploration and onshore opportunities may be quick, but they also tend to be small. Explorers seeking both healthy economics and material value still need to drill high-impact prospects in new and emerging plays. The key will be to focus on opportunities with a straightforward and quick route to commercialisation.

While the exact nature and timing of the energy transition is uncertain, two things are clear.

Firstly, the need for conventional exploration will stay at its current more modest levels. There is still plenty of room for strong performers to create substantial value. But there will be no return to the big spending of the previous decade.

Secondly, explorers must focus on quality. Only the best prospects will be commercial. Happily, most of the lower-carbon play types make good economic sense.

This represents a profound change in conventional exploration. Over the hundred-year history of the industry, exploration’s role has been to replace and to renew resources. It has been the primary engine of growth. As growth slips off the agenda, exploration’s new role is now one of portfolio improvement.

A new lease of life?

Could explorers find a role in carbon sequestration? Many of the capabilities associated with exploring for oil and gas boil down to an understanding of the movement of fluids through the subsurface. If the trapping of carbon dioxide in subsurface reservoirs becomes an industry in its own right – as it very well may - today’s explorers might find they have an important role to play in the future. 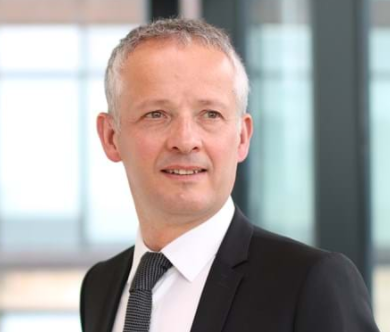