The US has announced economic sanctions that effectively stop imports of Venezuelan oil.

This leaves the complex refineries in Texas and Louisiana scrambling to find substitutes for the Venezuelan heavy oil they consume.

The situation creates an opportunity for Canada to fill in the void, but only if crude by rail can ramp up to deliver Alberta oil into the region.

Importantly, Guaido also has the support of the United States and most democratic nations, including Canada. To show their support for Guaido, the United States is requiring that US refiners hold payments in reserve for the Guaido-led government.

This forces Maduro to find other buyers, even if the barrels need to be sold at deep discounts.

Venezuela’s troubles have been escalating for years. The rise and fall of the country’s fortunes have tracked its oil output.

In the 1950s and 1960s, Venezuela attracted investment and its oil production peaked. They were not immune to the decade long oil market downturn of the 1980s, but production rebounded in the 1990s at over 3.0 million bbls/d.

More recently as social and economic instability has grown, output has been falling. In December, Venezuela produced only 1.25 million bbls/d. 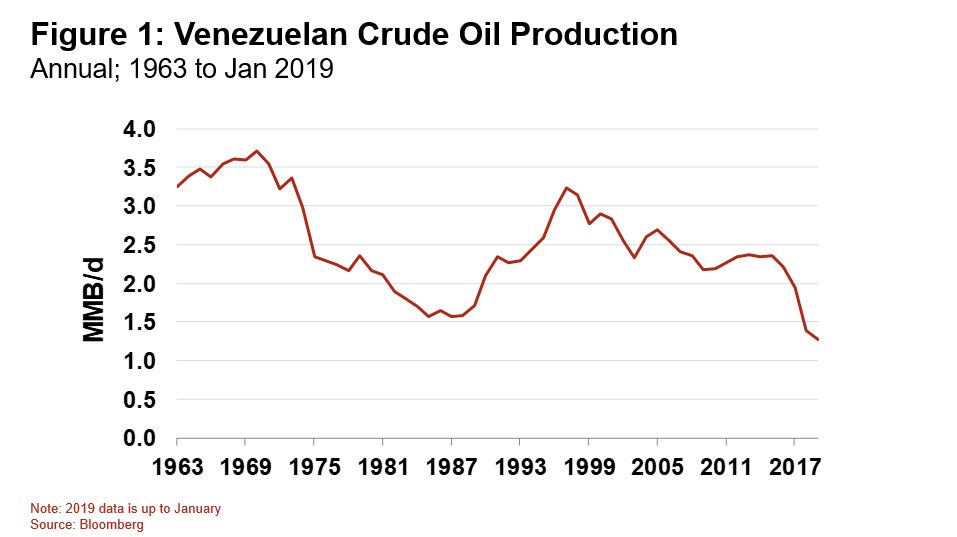 A Heavy Oil Shortage on the US Gulf Coast

The sophisticated refineries that dot the Texas and Louisiana coastlines were built for the challenge of turning the world’s most dense crude oils into light, valuable transportation fuels. Feeding this massive energy complex on the US Gulf Coast relies on imported heavy oils from Venezuela, Mexico, Colombia and more recently from Canada.

Even before the Venezuelan import ban, the region faced a heavy oil shortage, consuming 335,000 bbl/sd less than it did in 2010 (see Figure 2). 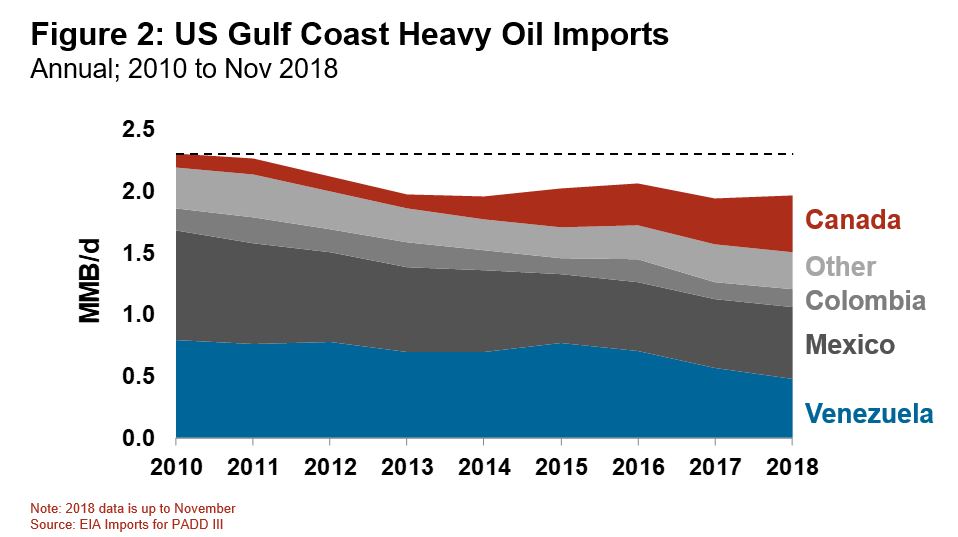 Canadian Rail Economics to the US Gulf Coast

Since the Alberta government curtailed its production, Alberta’s heavy oil (called WCS) has traded at a US$10/bbl discount to WTI at the Cushing hub in Oklahoma, a more narrow discount than normal. Typically, the small price differential would make rail economics impossible, but there are a number of unique factors that support rail economics now.

One factor is the strong price for heavy oil on the US Gulf Coast. Because of the shortage of heavy oil, prices have been increasing.

In the not so distant past, heavy oil would sell for an US$8 or US$10/bbl discount compared to lighter oil grades. Today, the heavy oil is selling for only a few dollars less.

As US Gulf Coast refiners scramble to fill in the void left by Venezuela, it’s possible that heavy oil prices could increase more.

Another factor is the discount for inland crude oils at the Cushing Hub in Oklahoma compared to at the US Gulf Coast. Today, crude oils at Cushing are deeply discounted compared to prices on the Gulf Coast, selling about US$6 or US$ 7/bbl cheaper for the same type of crude oil when typically they are only a dollar or two cheaper.

Including the effects from these supportive factors, Figure 3 illustrates the price for landing Canadian heavy oil by rail into the US Gulf Coast.

The crude by rail delivered price is not far off the going price for heavy oil in the US Gulf Coast, just US$2 to US$6/bbl higher.

Further, rail shippers from Canada with multi-year contracts can land oil into the US Gulf Coast at a lower price, assuming they are willing to forgo part of the sunk costs they have incurred such as rail car leases, terminal fees, tank fees and railway penalties. 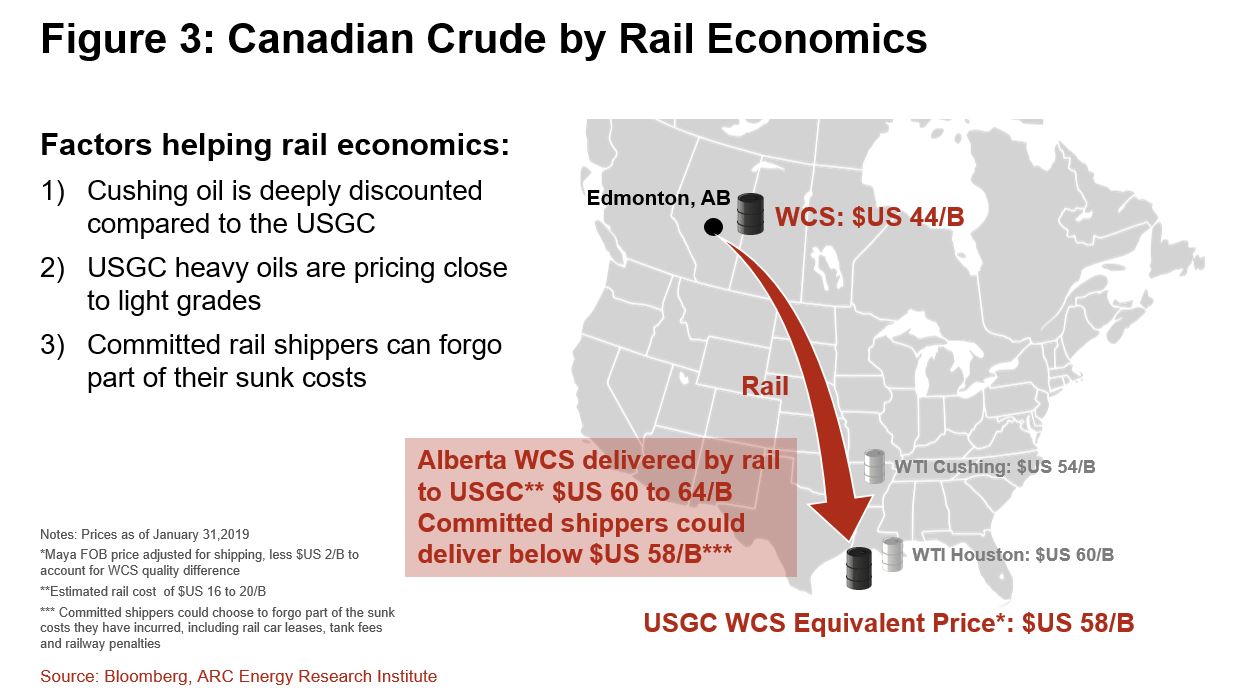 The void created by the loss of Venezuelan supply is creating a strong pull for Canadian heavy barrels on the US Gulf coast. But will the Canadian barrels show up? It will depend on how much rail and locomotive capacity becomes available.

Another uncertainty is the longevity of the ban on Venezuelan crude oil imports. If President Maduro were overthrown in the next few weeks, the import ban may be lifted before the impact of potential shortfalls fully materializes. A longer leadership stalemate will necessitate solutions.

No matter what happens, the situation highlights the need for more heavy oil on the US Gulf Coast. Expect more Canadian heavy oil to be drawn south by rail and, if logic prevails, eventually by pipelines.

Whitelaw: Is it time for a renewed movement around energy transition literacy?

Back in what seems a lifetime ago, the notion of “energy literacy” enjoyed a moment in the sun. Many “stakeholders”…

The free ride for methane, a climate-warming gas 84 times stronger than carbon dioxide, is finally nearing an end in…