The double loss suffered by the B.C. government in the latest round of paper-shuffling over the Trans Mountain Pipeline Expansion doesn’t seem to bother the province’s cabinet much. Premier John Horgan and his ministers are still reciting the refrain that the heavy oil line, now owned by the federal government, is not in B.C.’s best interests.

That stance didn’t win them much ground last week, as the National Energy Board re-confirmed its earlier approval of the project, and an Alberta court sidelined B.C.’s stand in a legal skirmish arising from the project.

The NEB reconsideration was mostly about process legalities, but it did result in another batch of conditions that highlight one of the countless side-issues in the argument.

This one is about southern resident killer whales, specifically how the noise from ship engines likely has an adverse effect on them.

If you follow B.C.’s argument in the court case, it leads to logic gaps. All of which landed in the legislature Monday during question period.

B.C. was trying to sue Alberta over its legislated intention to curtail fuel supply in the existing Trans Mountain pipeline to Burnaby. The judge dismissed it on a technicality — the law hasn’t been used yet, so B.C. can’t sue for damages until the damages actually happen.

But B.C. filed a remarkable argument. Opposition Liberals pointed to an affidavit where a B.C. official swore that the pipeline is essential “to avoid increased prices, lack of supply and civil unrest.”

So the NDP cabinet position is that the expansion of the pipeline is not in B.C.’s interest, but the existing line that has supplied the south coast with fuel for 60 years is vital to the point that turning off the taps would spark riots.

That’s a confusing point that gets more confusing when you recall the origin of the bill. It was Alberta Premier Rachel Notley’s direct response to a move B.C.’s Environment Ministry made to consider regulating and controlling fuel shipments through the province while safety studies are done.

That idea is still in court. But as it stands, B.C. sued Alberta for considering the same thing it’s contemplating.

And while turning off the taps appears to look valid to the B.C. cabinet, if Alberta tries it on the existing line, B.C. is worried about price hikes and civil unrest.

Even realizing that lawyers will throw everything they can dream up into winning a case, it takes a lot of gall to make that argument.

Meanwhile, the NEB decision also brings a raft of inconsistencies into play.

It reiterated the worry about whales in the initial approval and put even more emphasis on the effect, even while saying the national interest outweighs it.

Now it wants an “offset program” for noise and the risk of collisions.

That would slow marine traffic, limit whale-watching boats and impose specific noise reduction measures on ferries. (Transportation Minister Claire Trevena announced another 2,700 ferry sailings a year on the mid and north coast the same day that idea was broached.)

Fighting the pipeline on grounds the extra tankers would endanger whales opens up the question of why Canadian tankers are under the microscope, when U.S. tankers dominate the entire Salish Sea.

That doesn’t appear to come up in Horgan’s regular meetings with Washington Gov. Jay Inslee.

B.C. Opposition Leader Andrew Wilkinson also pointed out that the U.S. is a fundamental source of south coast fuel. Washington refines far more fuel than Metro Vancouver does, and sells it to B.C. customers routinely.

So U.S. tankers pass behind the legislature daily, supplying refineries B.C. relies on “and this government says it’s going to solve the world’s problems by blocking the Trans Mountain pipeline so we can buy all our fuel from Washington. This is ridiculous,” Wilkinson said.

Attorney General David Eby reacted to the court loss on Monday by asking: “Why do we have to wait to get punched in the face, to argue that they shouldn’t be allowed to punch us in the face?”

So it’s going to get gnarlier. 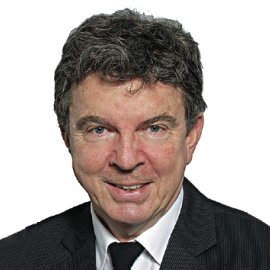 Les Leyne is a contributor with the Victoria Times Colonist. Born in Rivers, Manitoba, Leyne attended Carleton University and UVic, where he graduated after working on the university newspaper. He worked at weekly newspapers in Duncan, where he covered the incineration of 13 tons of marijuana, and the west shore before joining the Times Colonist. Leyne was banished from the newsroom to the Legislature bureau in 1985 and has been there ever since. His budget scoop in 1995 got him nominated for a Jack Webster Award and he claimed a share of the TC's 2003 Webster Award for political coverage. He was nominated for a National Newspaper Award for column writing in 2008 and won the Jack Webster "City Mike" Award for commentary in 2009. He writes four days a week on provincial affairs.