Even though Canada is set to enter an increasingly competitive and crowded global LNG market in the mid-2020s, it may be able to look at a key competitor in the United States for some encouragement.

This analysis was part of a presentation made earlier today by Mark Young, senior oil and gas analyst at Evaluate Energy, at an event in London, U.K., centred on Canada’s LNG growth opportunity.

Global LNG competition is already fierce with 20 exporting countries at the end of 2018 and further export capacity growth in 2019. Heading into the next decade, Young highlighted a selection of projects around the world that are scheduled to begin exporting before 2030 along with Canada’s proposed facilities, according to public disclosures.

These projects, as well as other expansions and new projects scheduled for commercial operations in the 2020s, will form major competition in the ideal Asian and European markets for potential Canadian LNG exports.

The table clearly identifies the U.S. as a key competitor and there are many more U.S. projects of varying sizes in play on top of the 10 projects included above as the country looks set to build on its remarkable early growth.

“In just its second full year of exports from the east and Gulf coasts, the U.S. shot to the fourth largest exporter of LNG worldwide in 2018 and also exported to more individual importing nations (29) than any other exporter,” said Young.

The early success and the ability to send its cargoes to so many of the world’s importing countries has been based on selling LNG on short-term or spot deals.

“No country in the top 10 global LNG exporters used the short-term market to such a high degree as the U.S. with 65% of its exports sold on short-term deals.” 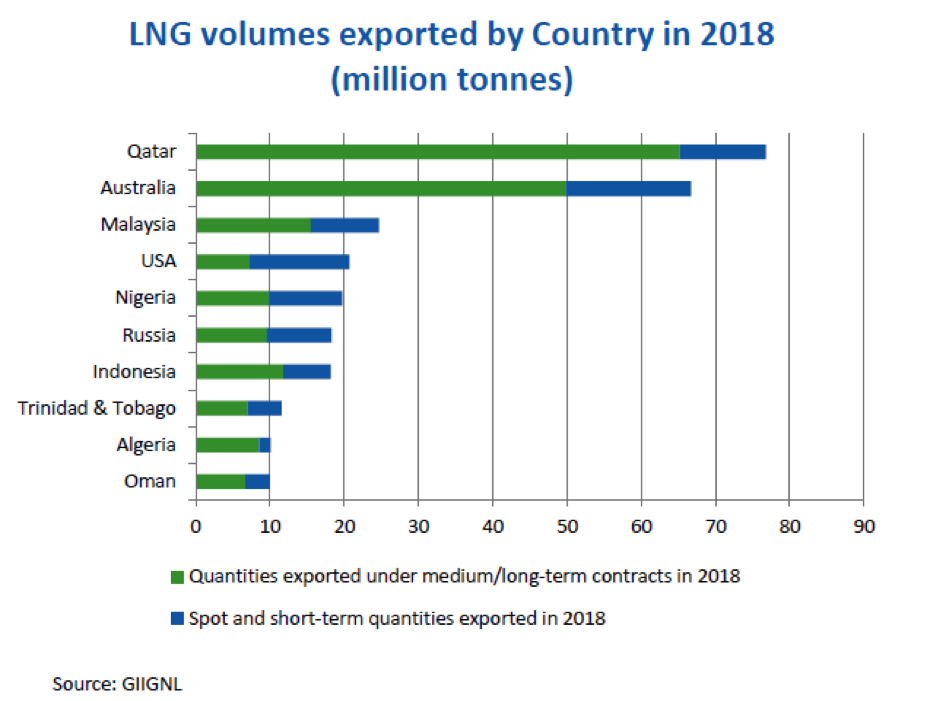 Australia saw a greater overall volume exported this way, but it was relatively minor compared to its long-term contracted volumes sold over the same period.

The United States’ proximity to a greater number of importing countries plays a role in all of this. But gaining access to these markets and these short-term deals was made possible because of destination-free contracts with buyers and the fact that its buyers include global LNG traders. These traders involved in U.S. deals, of which LNG Canada’s Royal Dutch Shell is a good example, sign agreements to take a large contracted volume of LNG from a specific terminal into their global portfolios over a number of years and sell them on.

For Canada, this is an important point according to Young and should provide some encouragement for the country’s prospects of finding buyers in an increasingly crowded marketplace. “If we look at the example of LNG Canada, we can see that Shell and Petronas are owners and will be marketing their own proportionate volumes from the project. Both have large portfolios of LNG that is traded around the world. BP is also a potential customer for the planned Woodfibre facility, while Chevron and Woodside — two more global traders — own Kitimat LNG.”

Today’s London event was organized on behalf of the Government of Alberta by Glacier Media (the parent company of the Daily Oil Bulletin) and the Canadian Society for Unconventional Resources, to provide a special briefing to around 140 European energy investors and stakeholders.

The event is part of a much broader, integrated awareness campaign to share the benefits of Canadian LNG. Key findings from both today’s event and an equivalent September event in Tokyo will be shared with oil and gas executives at a special free event in downtown Calgary on December 11. Click here to register.

“We are working hard to raise awareness of Canada's potential to provide European and Asian markets with highly competitive, secure supplies of cleaner, greener LNG to meet future natural gas demand,” said Paul Harris, chief marketing officer of Glacier Resource Innovation Group. “Continuing to share this message in London, as we did in Tokyo in September, is vital as Canada seeks new markets for LNG produced on its east and west coasts.

In addition, the Daily Oil Bulletin just released the second in a series of special reports on Canadian LNG. Click here to view and download this free report.

Producing the “cleanest” LNG could offer a marketing advantage to Canada’s nascent industry as overseas buyers become increasingly concerned about the climate change implications of their purchases, finds the report.