The oversupply of crude oil from Western Canada as a result of pipeline delays has created major hurdles and roadblocks for the industry as a whole, but it has also created opportunities for companies with the right assets.

One of these is Gibson Energy’s Hardisty Terminal, and its sole-supplier connection to the nearby USD Partners unit train loading facility.

Over more than 60 years, the Hardisty Terminal has become an increasingly important piece of infrastructure in Western Canada’s oil supply chain; a bridge between upstream production and downstream markets that has become increasingly valuable as producers look for “insurance” to enable barrels to keep flowing despite challenges accessing pipeline capacity.

Gibson estimates that its Hardisty Terminal touches one in every four barrels of oil produced in Western Canada as it moves barrels to market through numerous on-site pipeline egress connections including the Enbridge Mainline, TC Energy’s Keystone, Enbridge’s Express Pipeline and Inter Pipeline’s Central Alberta system.

The "connectivity advantage" that has been built at its Hardisty Terminal over decades would be near impossible to replicate today, Gibson says.

But with Alberta’s export pipelines running at capacity, that means customers are looking for increased storage optionality, Gibson senior vice-president Sean Wilson told JWN on site at Hardisty this fall.

“Right now, market access options for producers and other industry participants are reduced because you don’t have as many choices as you should in a perfect market. Not only that, your actual choices are further constrained by apportionment, so as a producer or refiner, you need to make sure you have some insurance,” Wilson said.

“For example, as a large oilsands producer, I’m going to take out a 250,000 - 500,000 barrel tank to have the ability not only to build downstream pipeline batches and keep my proprietary crude stream segregated to retain its value, but also the opportunity to have a place to store my oil and keep my upstream operations continuing in the event I do have a downstream issue with respect to apportionment or planned or unplanned interruptions.

The opportunity to grow Hardisty has coincided with a major shift in focus for Gibson away from activity-based oilfield service businesses, Wilson said.

This July, the company completed the $100-million sale of its trucking business, successfully completing a $325-million divestiture program of non-core assets that it announced in January 2018.

The company had previously sold its wholesale propane business as well as its U.S. energy services assets — including seismic and environmental services businesses — for approximately $225 million in 2018.

“When people aren’t drilling wells or producing oil like they were prior to the oil price downturn, many of our activity-based services were in lower demand; many of our trucks were parked,” Wilson said.

“We want to have a stable, high quality cash flow business; long-term contracts with credit worthy counterparties where, whether the commodity price is up or commodity price is down, we’ve got a steady cash flow stream coming in to help ensure that, among other things, our dividend is safe and our growth capital program is fully funded.”

Amid the oil price downturn and the appointment of new CEO Steve Spaulding following the retirement of Stewart Hanlon, Gibson started re-evaluating its strategy in 2017.

The company says it has since undergone nothing short of a complete transformation, with a clear focus today on terminals, pipelines and other oil infrastructure. The company also owns about 1.7 million barrels of storage at its Edmonton Terminal and has four other smaller terminals within Alberta.

In the near term, Gibson expects to sanction two to four tanks per year, with near-term demand driven by producers and refiners looking for “additional flexibility in a tight egress environment.”

Long term potential at Hardisty, however, will be driven by continued growth of oilsands production as new export pipelines come into service, Gibson says.

“Our longer term growth is, in part, tied to the success of our customers, the resilient Alberta oil producers and refiners whose success is, in turn, tied closely to making sure our province’s market access issues are promptly addressed,” Wilson said.

“From a regulatory, environmental, technological and social perspective, we’re one of the best places for oil production globally and, if we don’t produce it, somebody else with lower standards is going to. Canada has got the resources in abundance and we really need to get those resources to the world market to get Canadians a fair price.”

JWN had the opportunity to visit the Hardisty Terminal in September 2019. Here are some of the photos, taken by Joey Podlubny. 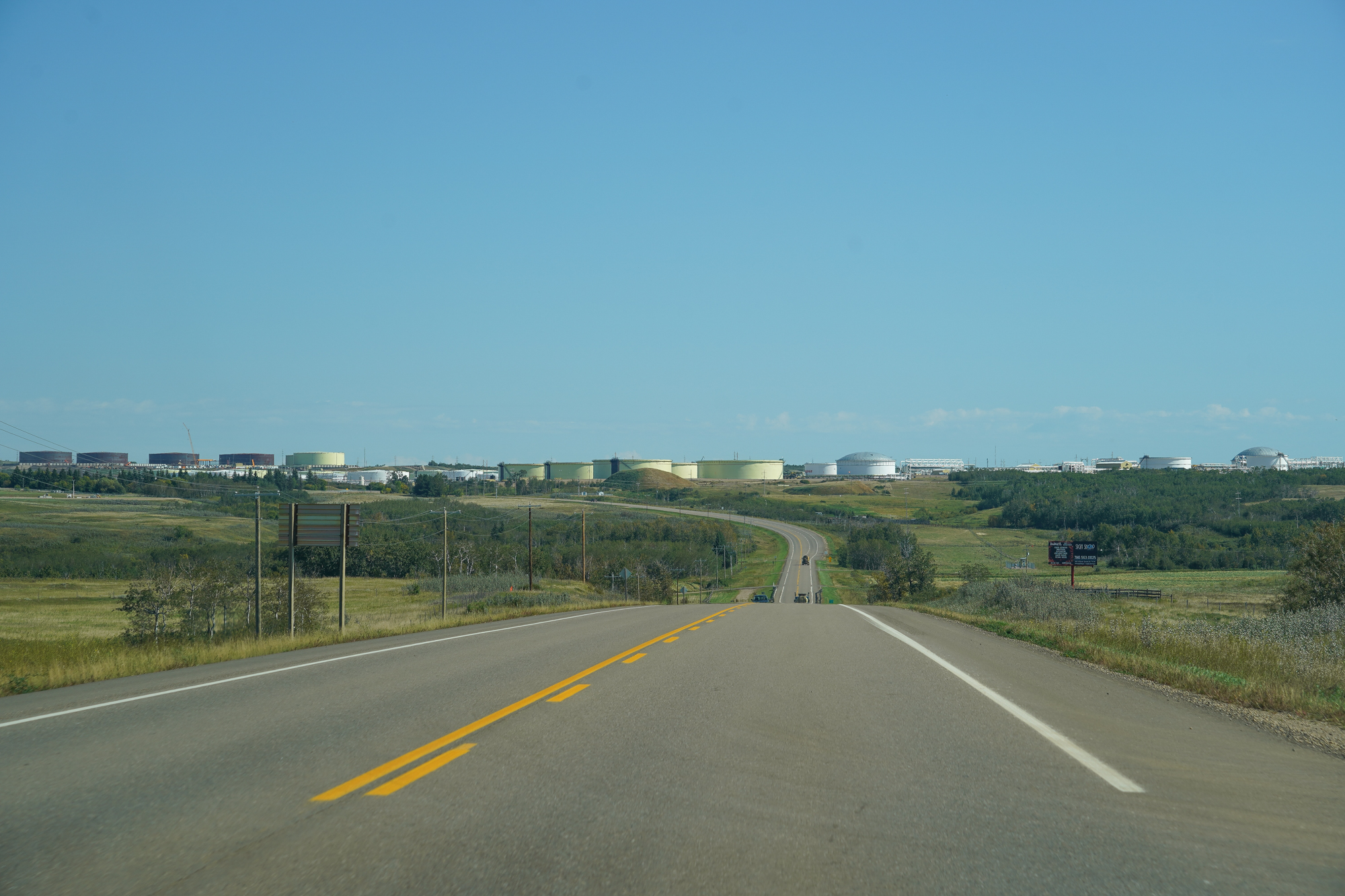 The view from the highway, approaching Gibson's Hardisty Terminal and other companies' oil storage and transportation infrastructure. 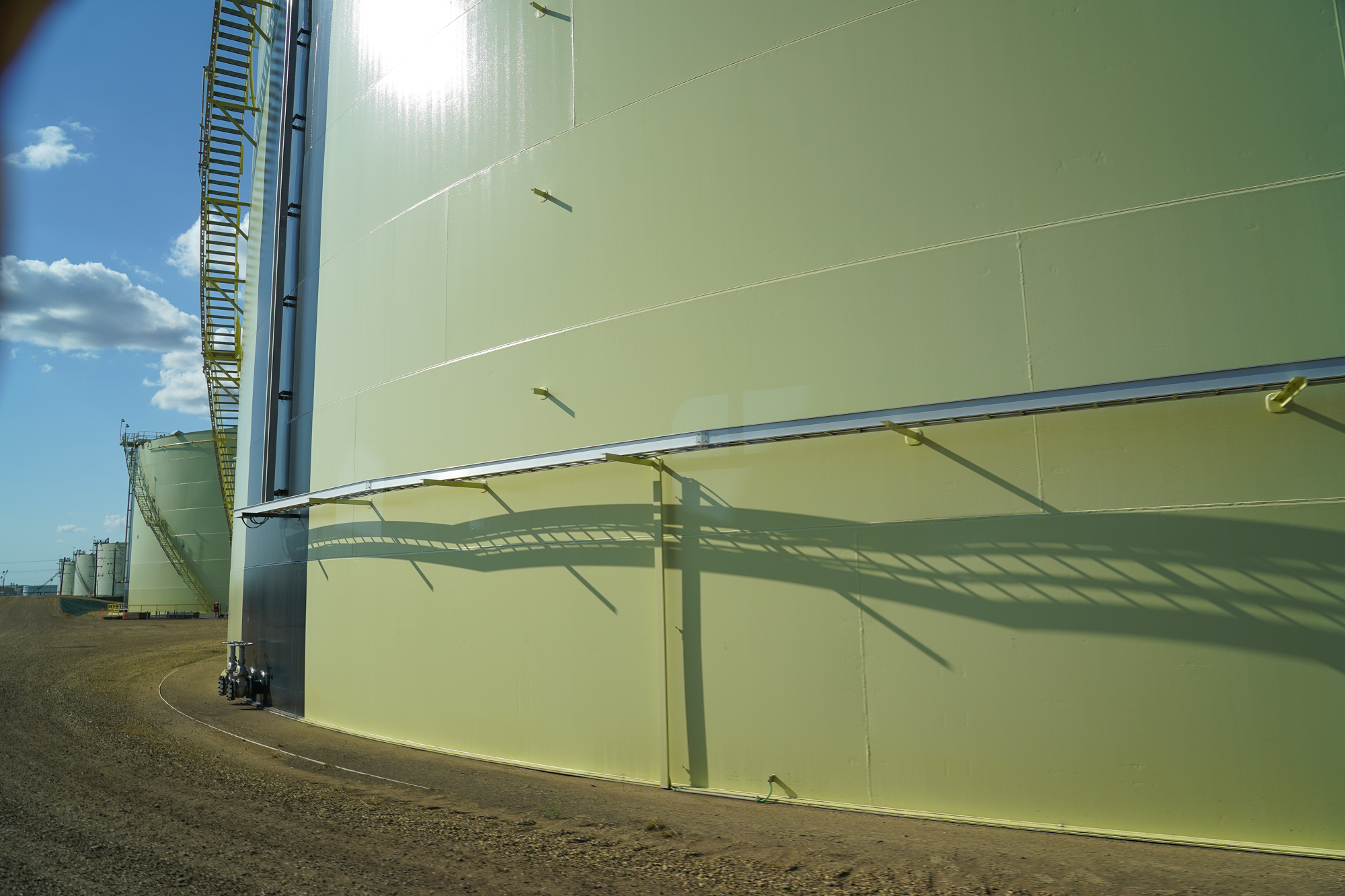 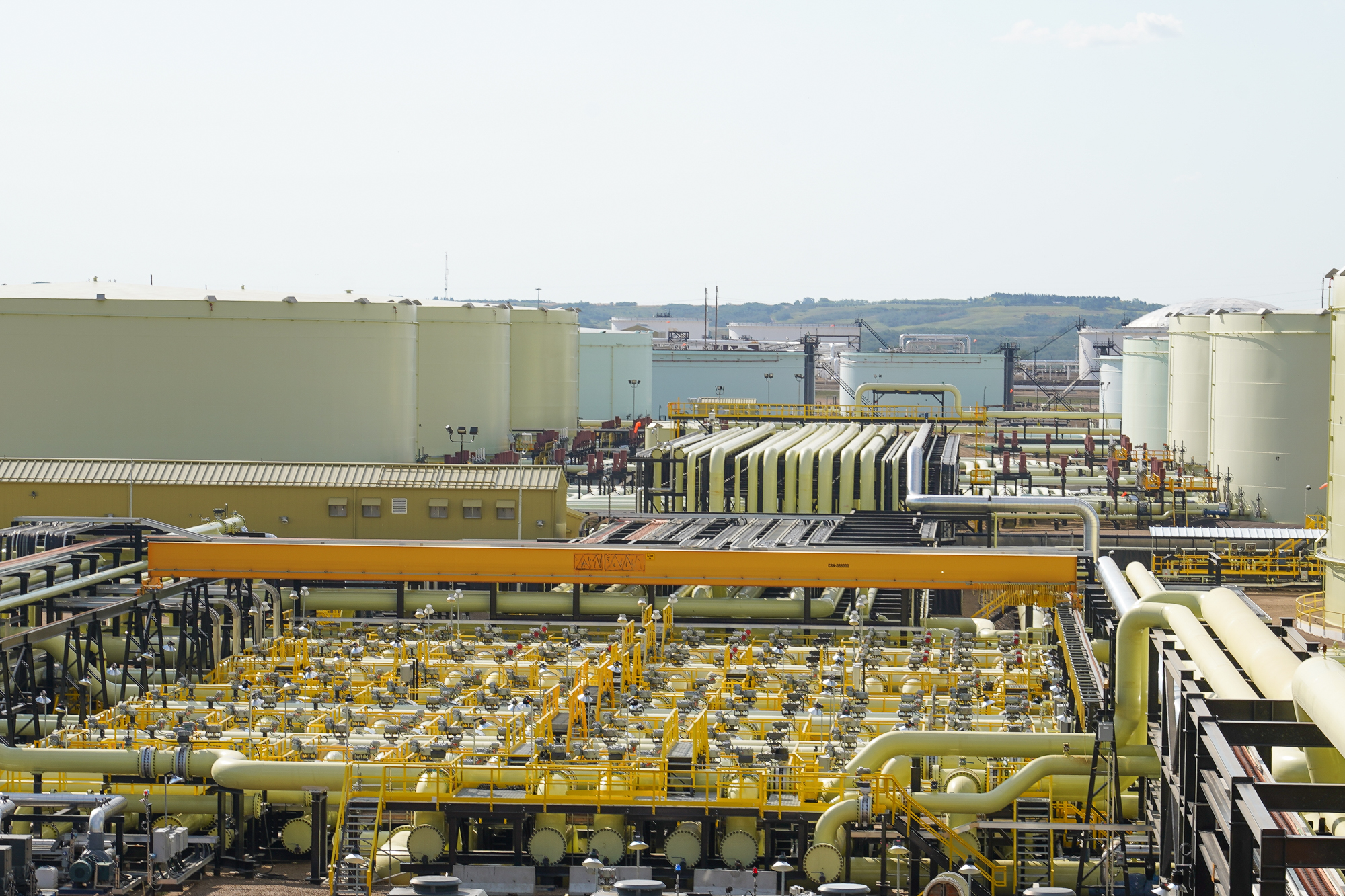 Gibson estimates that its Hardisty Terminal touches one of every four barrels of oil produced in Western Canada as volumes move to market; this is a view of the complex system that manages the multiple input streams. 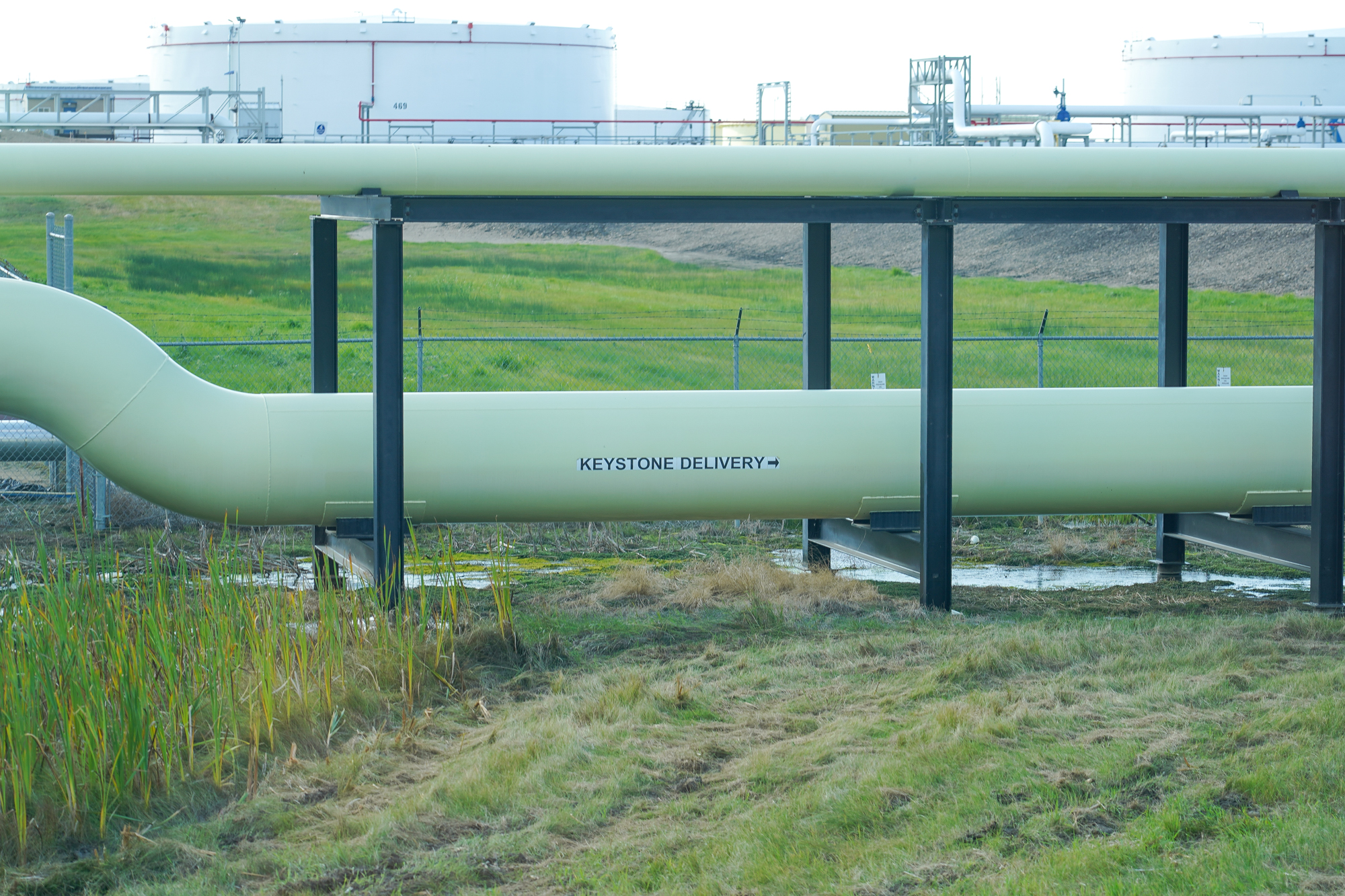 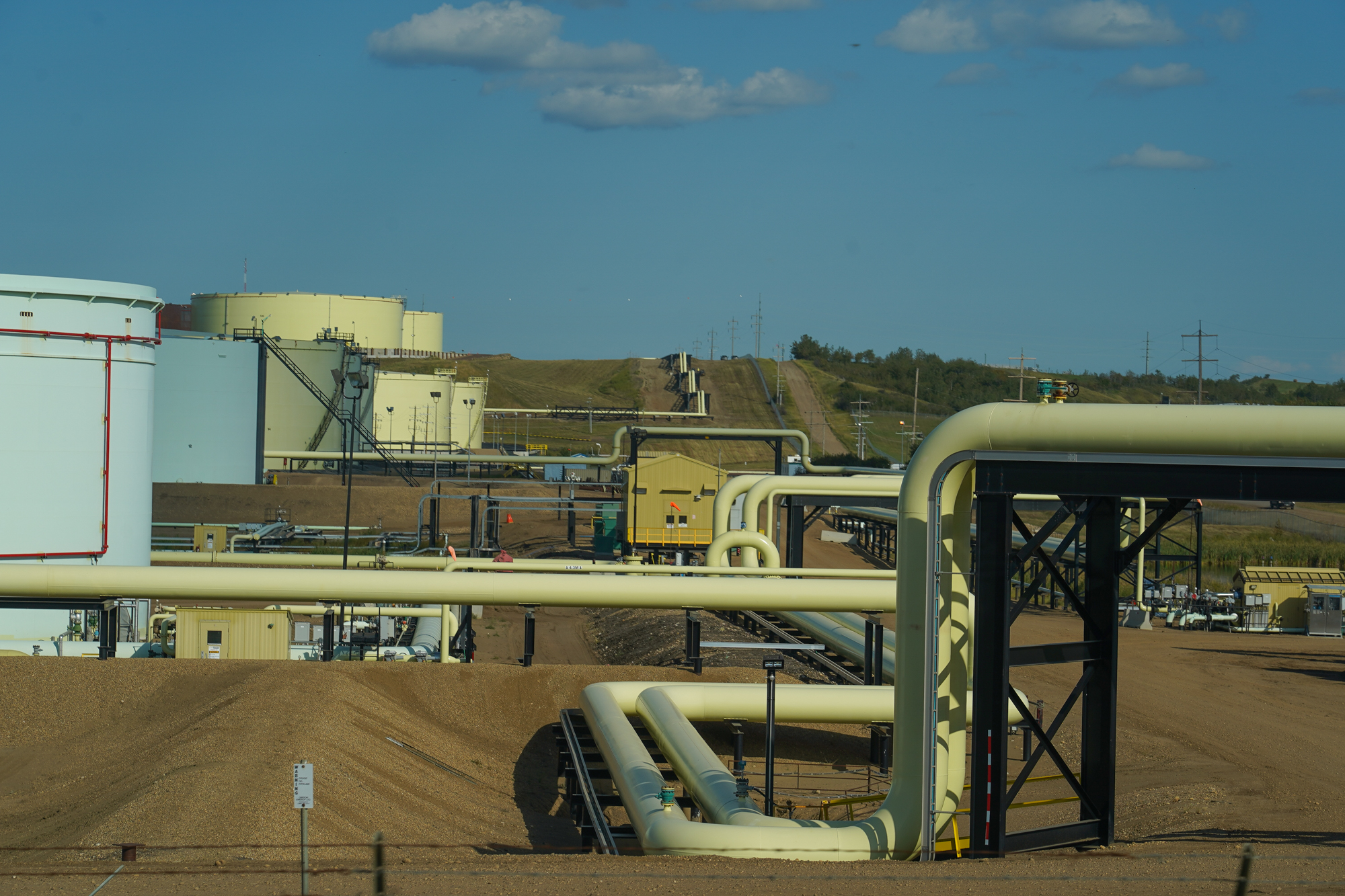 Gibson's recent expansion work at Hardisty has moved to the "Top of the Hill" at the site, where 2.5 million barrels of tankage is under construction and expected to be operational in 2020. 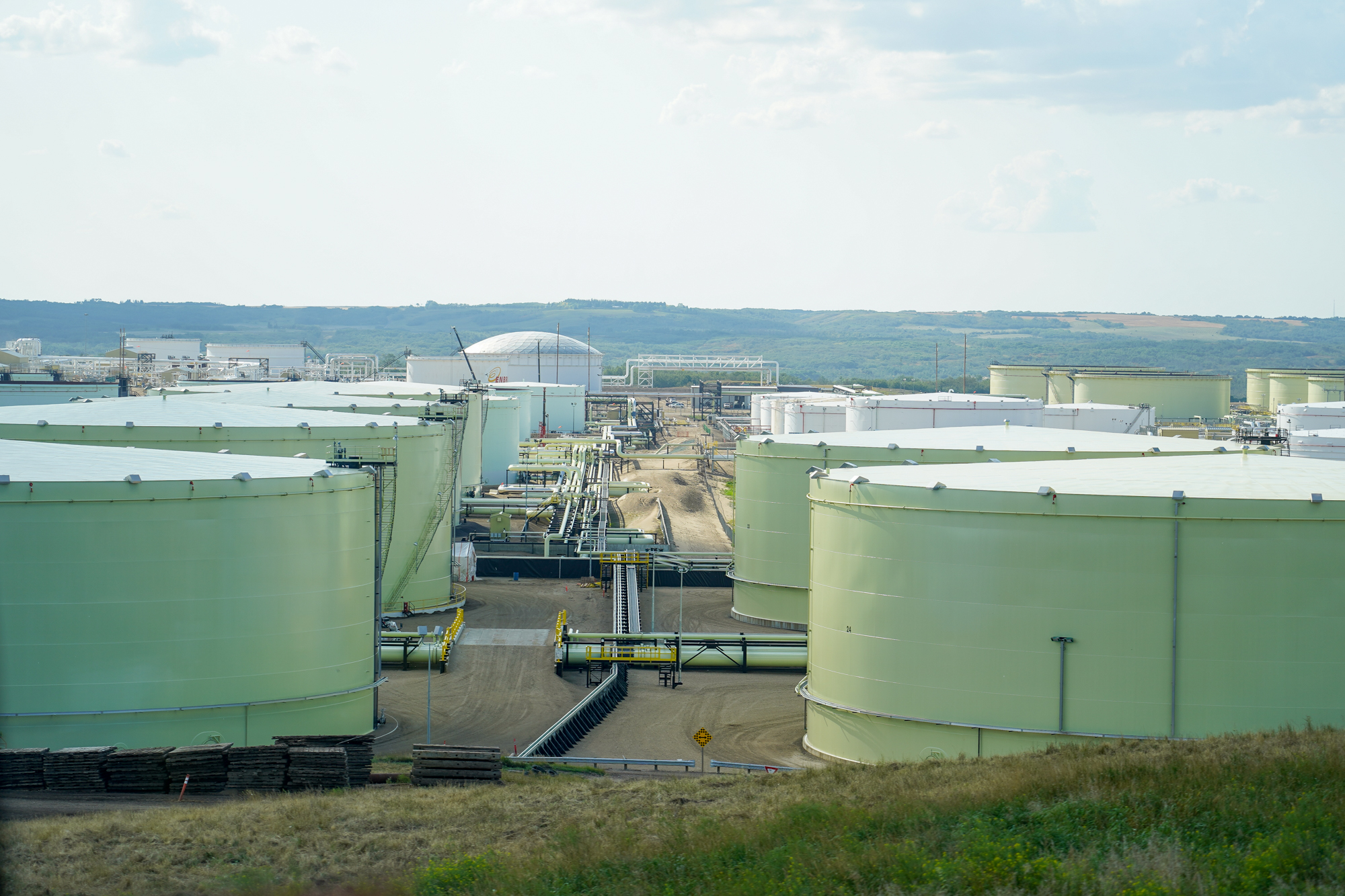 View of Gibson's Hardisty Terminal from the "Top of the Hill." 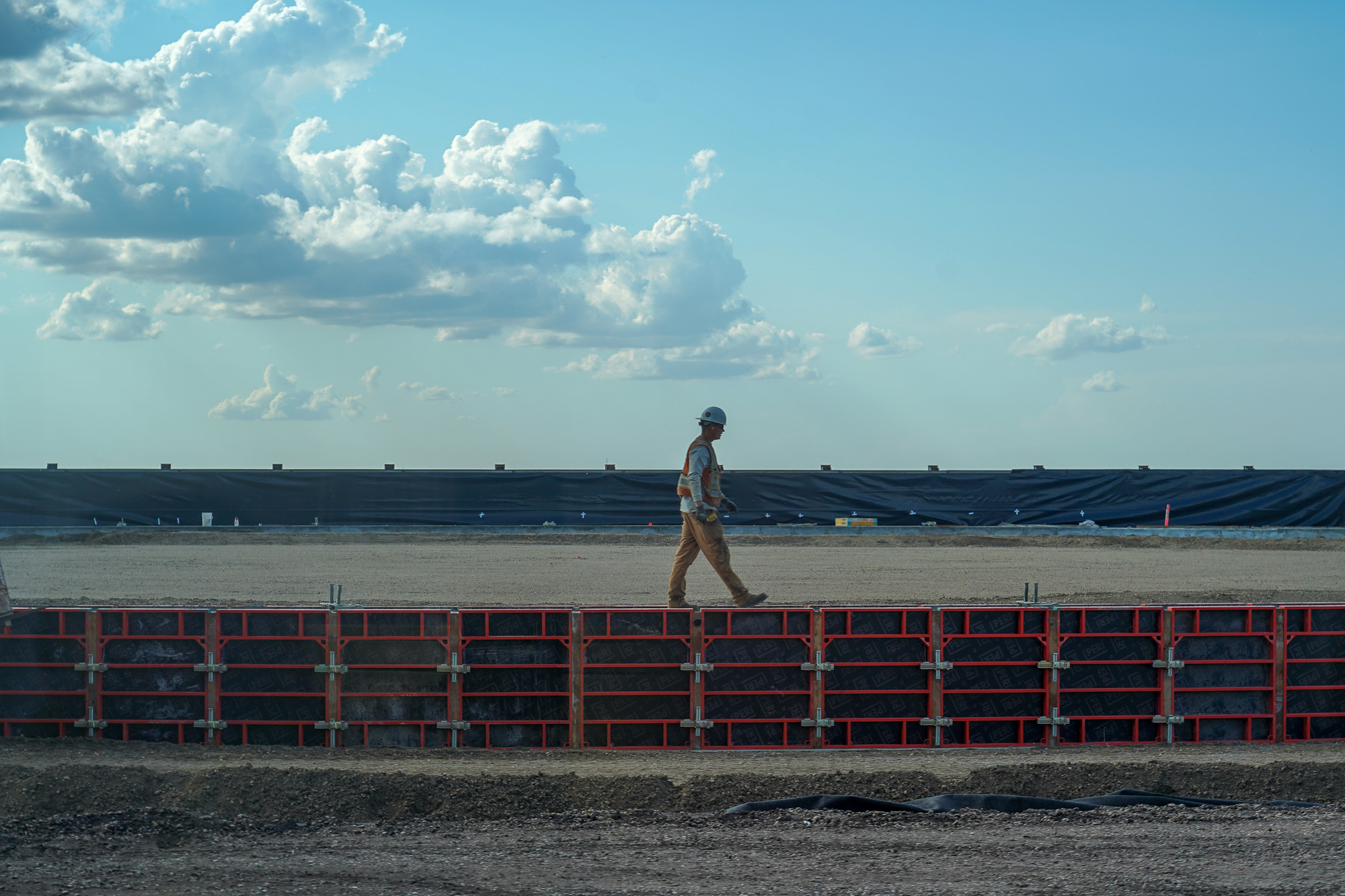 A construction worker walks across the foundation for another new tank. 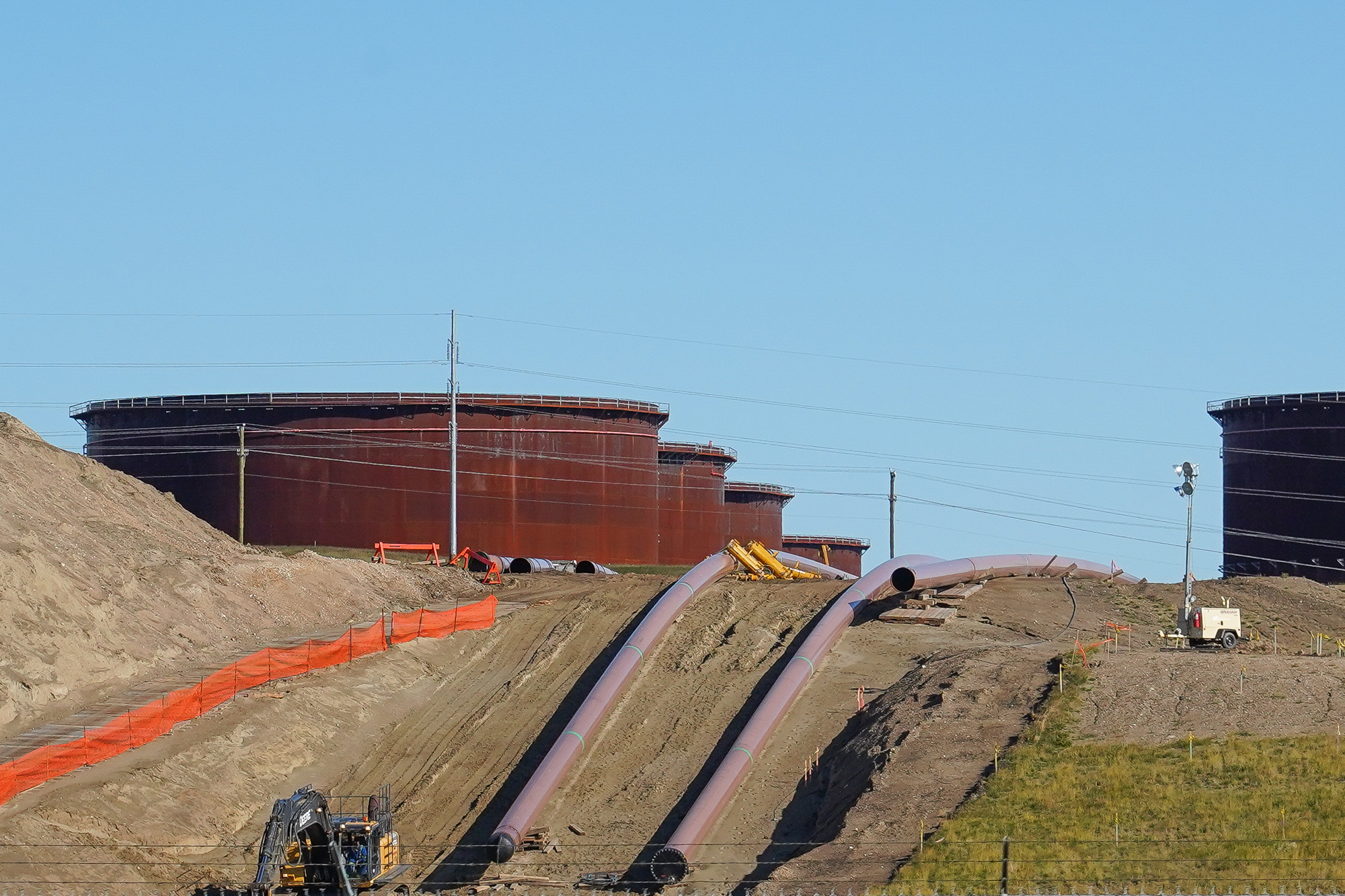 New storage tanks under construction at the "Top of the Hill." 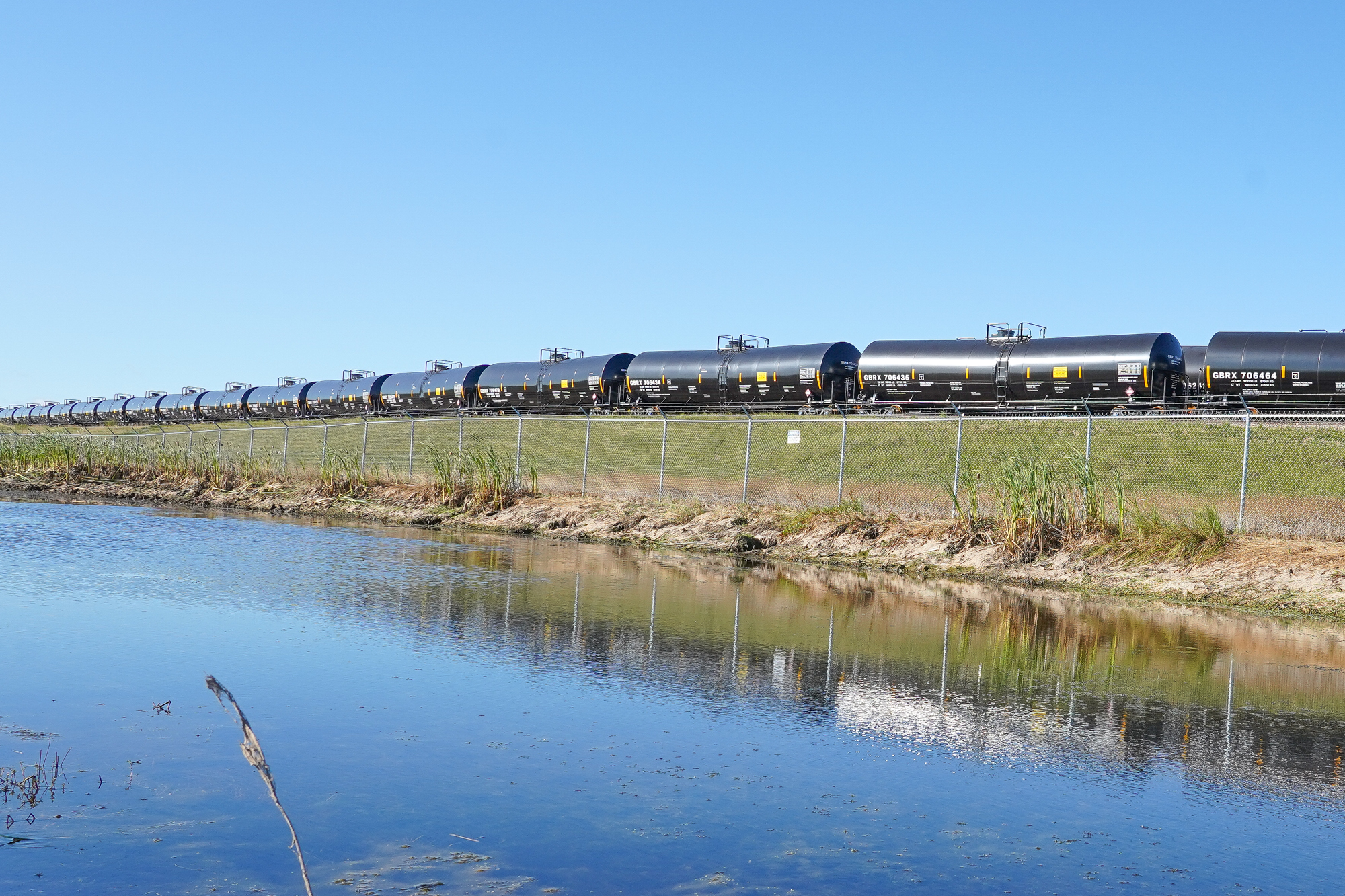 Gibson's Hardisty Terminal is the sole supply feed for USD Partners' Hardisty Rail Terminal, the first unit train-capable facility in Alberta. From it, USD has capacity to load up to two 120-railcar unit trains per day. 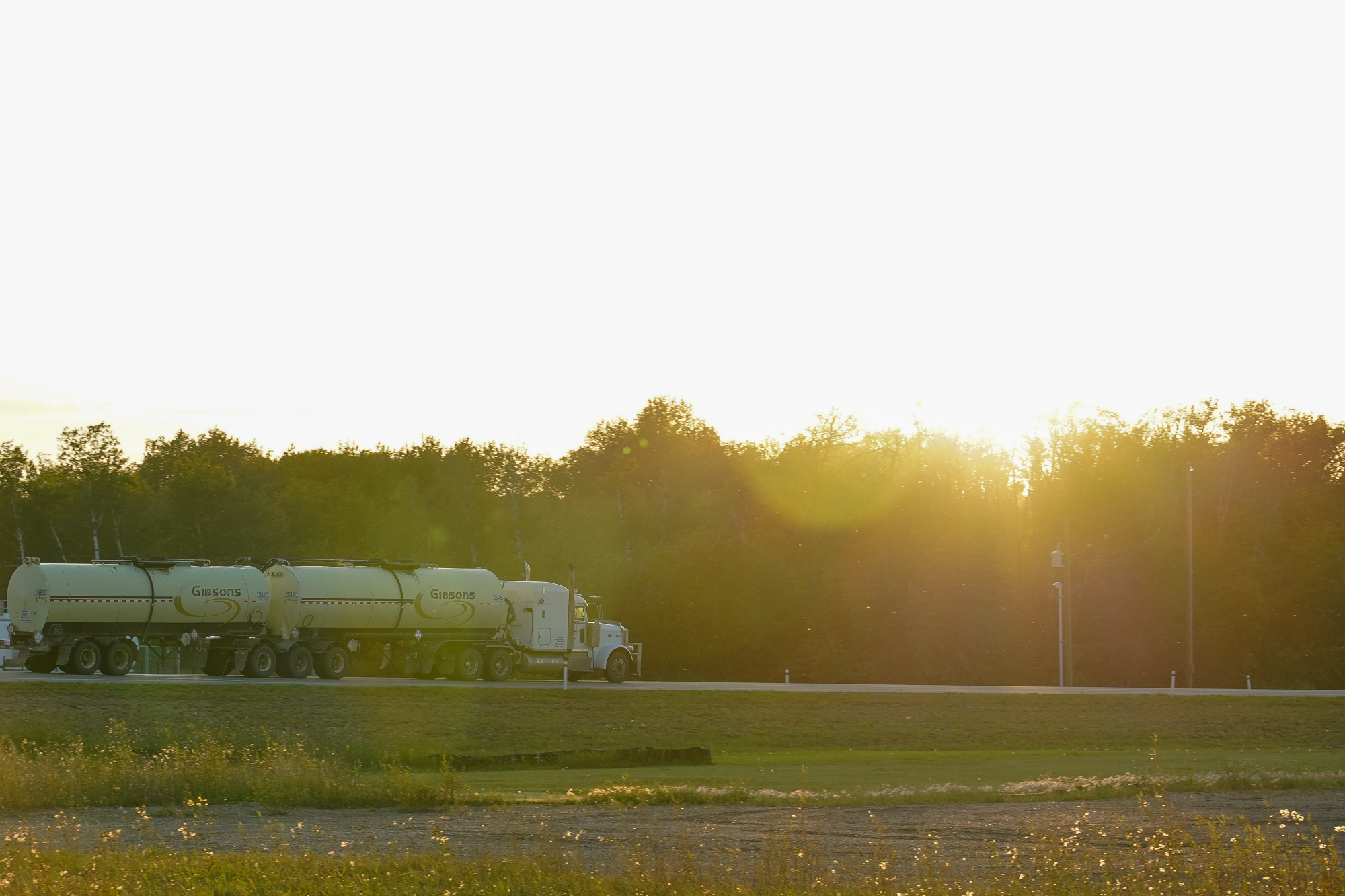 Gibson Energy completed the $100-million sale of its trucking business and associated assets to Trimac Transportation in July 2019. This unit was seen passing through Hardisty in early September.