What happens in China has consequences for global energy markets. That’s why I was excited to journey to the Asian economic giant this summer.

Family in tow, I traveled over 3,500 kilometres by train, cutting a path from Beijing in the north to Shenzhen in the South.

I saw a lot (see pictures below), learned a lot and could not help but make some energy-related observations along the way.

China is the most populous country in the world with 1.4 billion people. It has six cities with over 10 million people and an additional 13 urban centres greater than five million.

In my travels, I saw cities on the scale of London or New York that most of us have never heard of.

China’s mega cities have grown due to the mass migration of people from rural to urban life. The population shift has driven the stunning transformation of the Chinese economy. As people moved to the cities, the country’s industrial output, productivity, wealth and energy demand all increased.

China’s population is expected to plateau, but with 40 percent of people still living in the countryside, the United Nations predicts the cities will grow for another 20 years (see note 1).

Due to the ongoing urbanization trend and low per-capita energy use ̶ the average Chinese person uses about 60 percent of the Japanese (see note 2) – most analysts expect the Middle Kingdom’s energy consumption will keep growing for some time.

The most common question about my trip is, “Did you see a lot of electric cars?”

The Chinese government is aggressively promoting electric cars with carrots (such as subsides for consumers) and sticks (fines for manufactures that miss their zero-emission vehicle quotas).

Country-wide, EVs are issued green license plates, making them easy to see. I did find plenty of electric cars, but they are still only a small minority of the fleet, at 2.2 percent.

Last year 24 million new combustion engine cars hit the road, compared to nearly 580,000 EVs (see note 3). Although the government has targets to ramp up sales in the future, at this point an electric car tipping point still seems a long way off.

One difference between China and other countries is the number of electric cars that are part of commercial fleets. One example is a ride hailing service called Caocao. Their fleet is supplied by EV manufacturer Geely, who is also an investor. Shenzhen is headquarters to one of the country’s largest EV companies called BYD or “Build Your Dreams.” In Shenzhen over half the taxis are electric and the expectation is that all of them will be in the next few years.

My most surprising “green plate” discovery was the number of city transit buses that were battery powered. In almost every place I visited – large or small – electric buses were on the road.

The rapid rise of the electric bus fleet has been supported by government subsidies geared at improving local air quality. Although funding for these programs has been cut back recently, the fleets are still growing.

I expect that by my next trip to China almost all the city buses could be electric. Nevertheless, oil demand in the bus segment is relatively small. In total, including long distance haulers, this mode of transport only consumes in the range of 500,000 bbls/d of crude oil or 4 percent of China’s total demand.

Heavily populated places are not great for driving. To counter the chronic traffic congestion, China is building out its public transportation system at a stunning pace.

Ten years ago the high speed rail system did not exist. Today China has more than 20,000 kilometres of track in service, greater than the rest of the world combined.

In the next few years high speed rail will connect more than 80 percent of the major cities (see note 4). I traveled 300 kilometres km per hour on a modern bullet train, and I strongly recommend it.

The urban subway systems are also expanding quickly. More than 50 Chinese cities are actively building out their metro systems (see note 5). Four years ago I visited a city of 8 million people that had no subway; today two subway lines are in service, with two more in the development stage.

In the near term, the build out of the public transportation network may prove more consequential for oil demand than EVs. It’s an efficient option for countries with high population density and is one of the reasons that Germany and Japan use half as much oil per person as the United States.

The country’s five-year plan is focused on tackling air pollution. One fix is forcing industrial boilers and residential heating systems to switch from coal to natural gas. I was told numerous times “we can’t heat with coal anymore.”

The rapid substitution of coal propelled China’s natural gas consumption up 15 percent last year. Another solution is more electricity from renewables and nuclear.

Still, I saw plenty of coal powered electrical generation plants on my trip. Although China is trying to kick its coal habit, the country is still heavily dependent on the black lumps that supply 60 percent of all its energy (see note 6).

Last year, despite the government’s heavy handed policies aimed at reducing coal, demand still grew by 0.2 percent. With China’s primary energy use increasing three percent last year, it is proving difficult to stop the unrelenting pull on all types of energy (see note 7).

China is demonstrating change in its energy systems at a pace not seen any other place. The country is quickly introducing alternative mobility and new energy sources to deal with overcrowding and pollution.

While China still has big challenges, including the dependence on coal and its seemingly unstoppable thirst for energy, a path forward for greening its energy system is starting to come into view.

Just possibly, 1.4 billion people can show the other 6 billion on our planet a trail head to a greener future.

The Green Plates – EV taxis in Shenzhen built by BYD 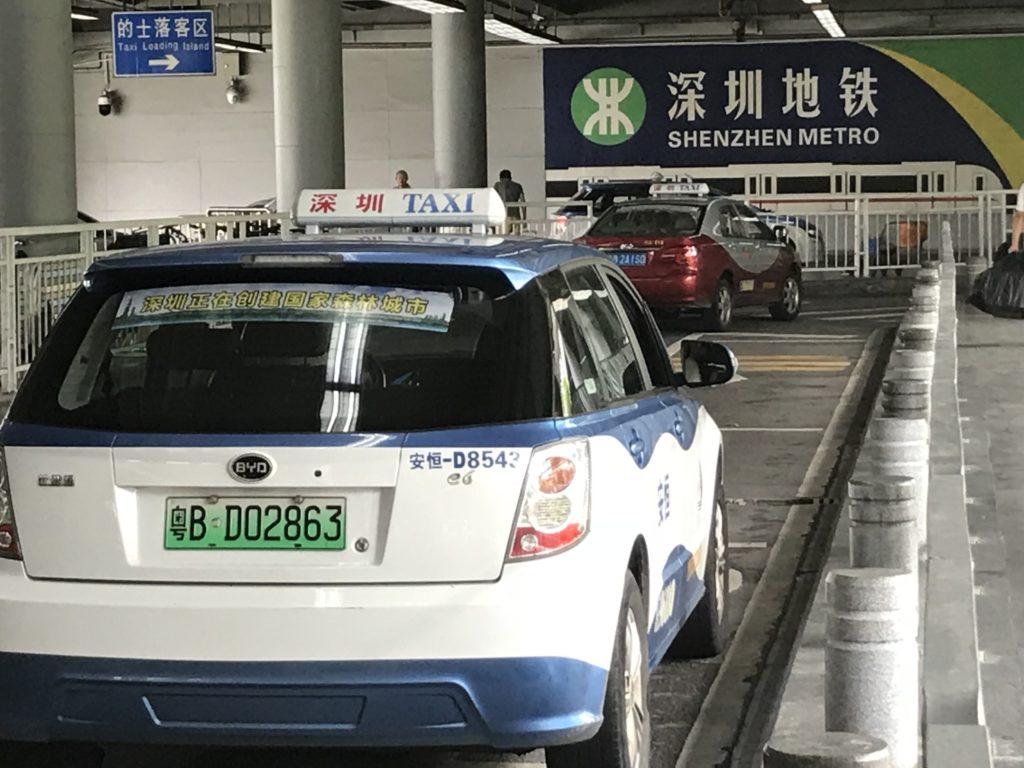 Urbanization continues, the construction of massive apartment complexes occurs across the country 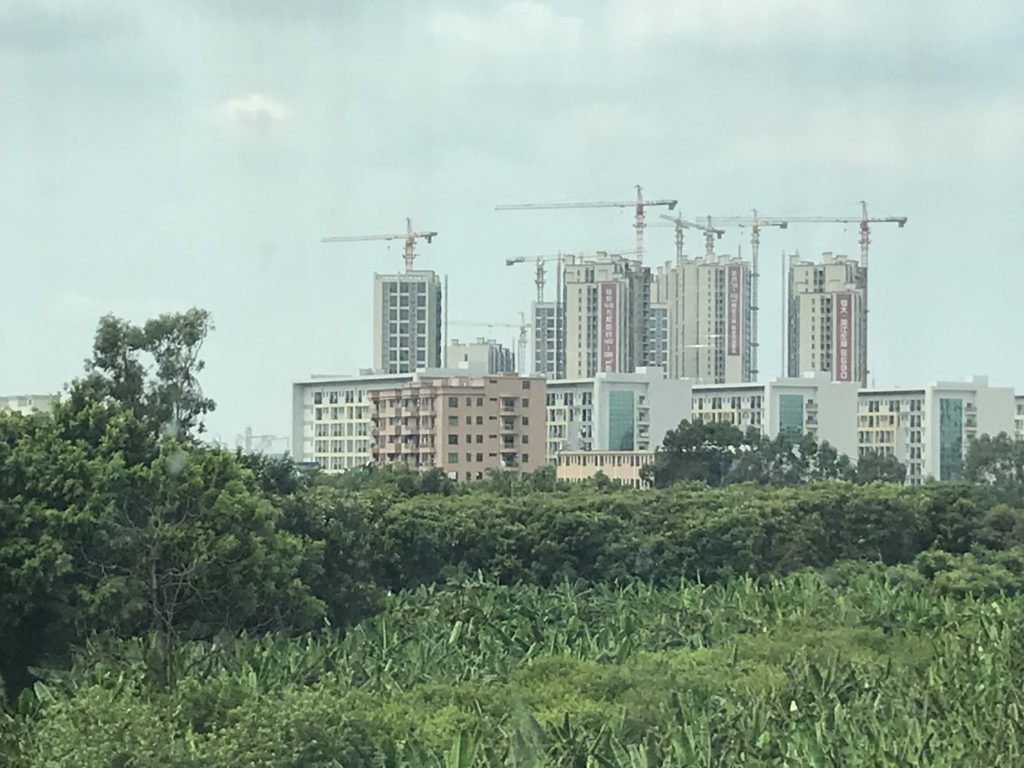 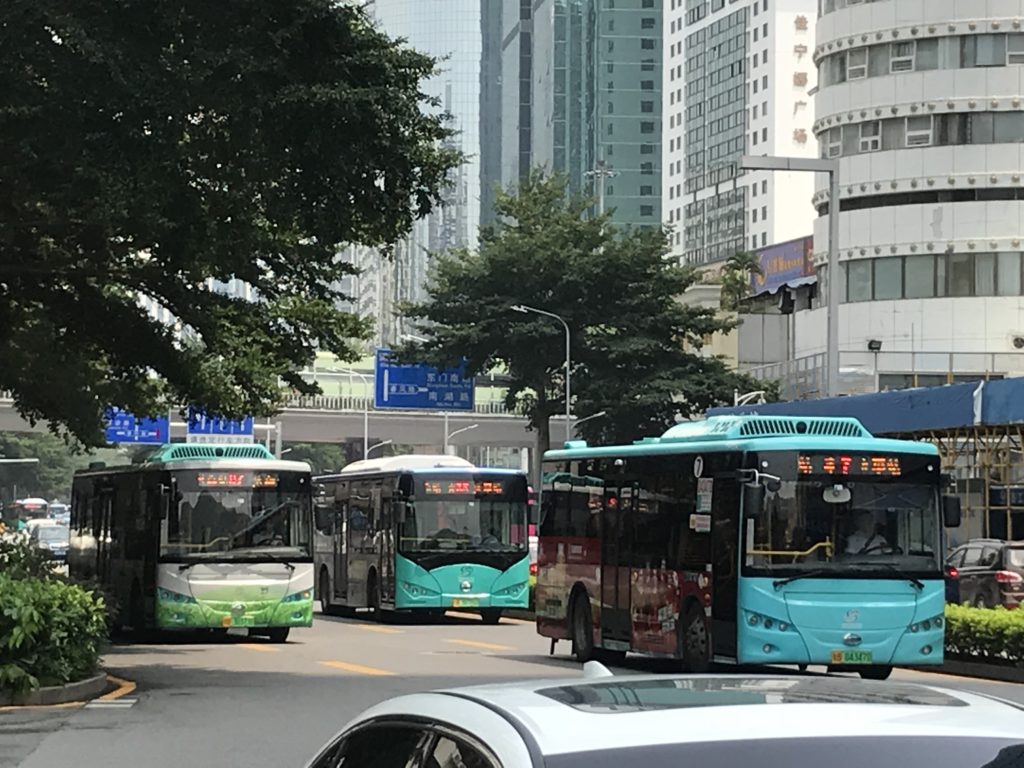 Even the luxury EVs can’t escape the traffic congestion 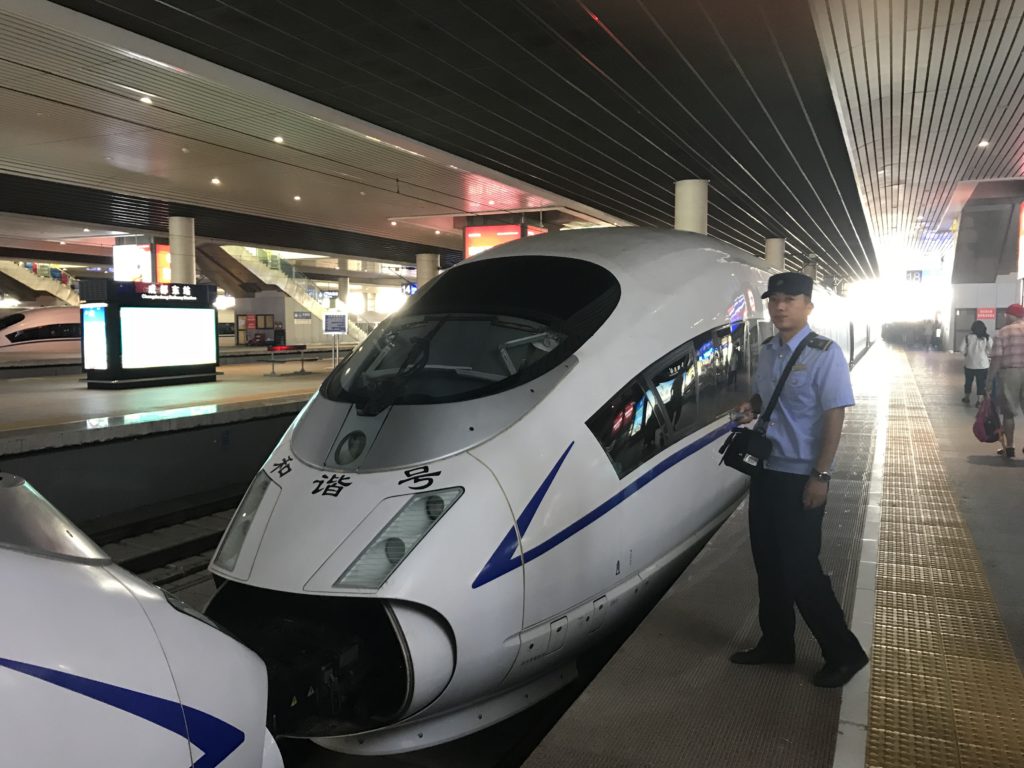 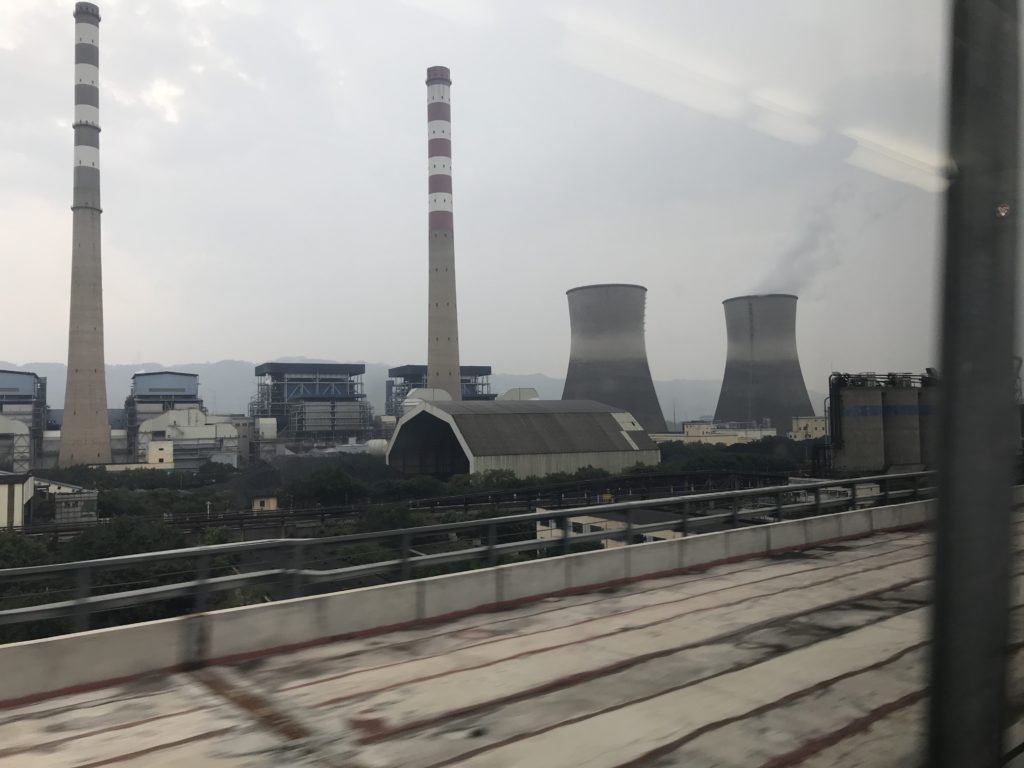 Many of the scooters are electric with green plates 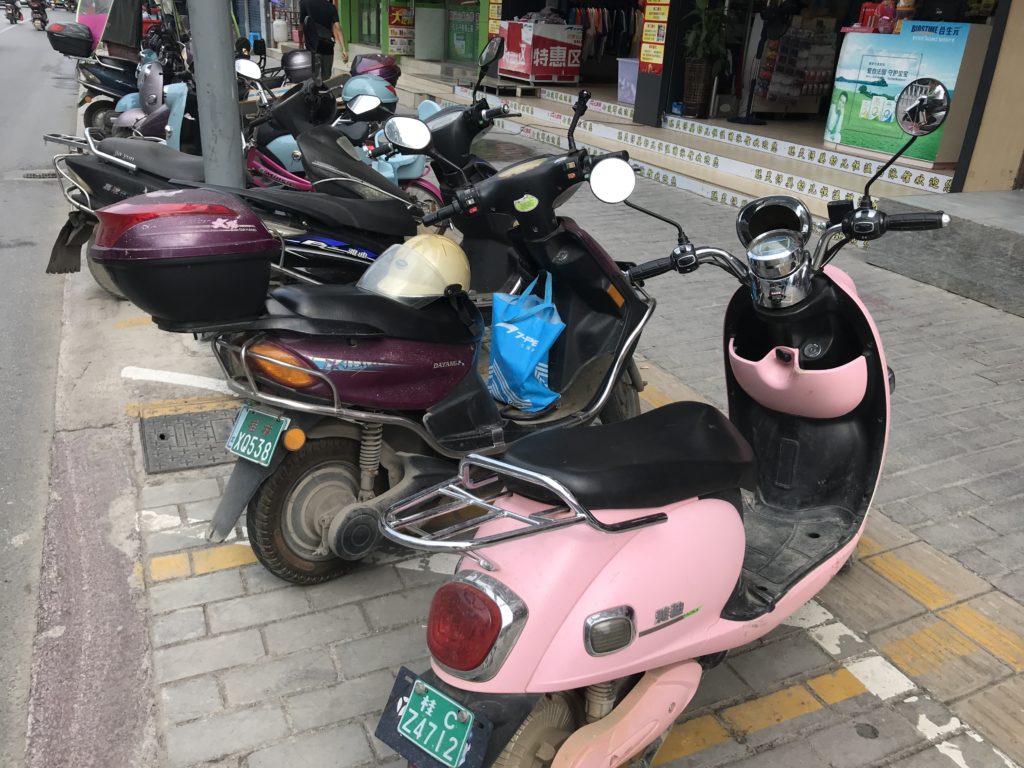 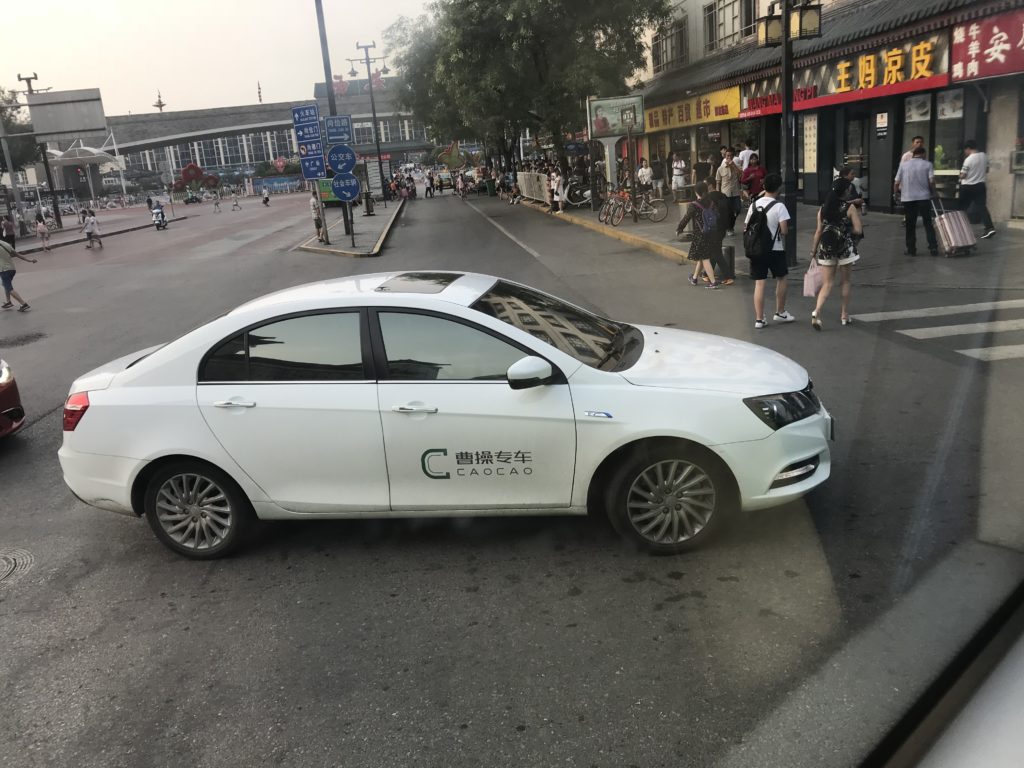