It is a new narrative. Electrons generated from wind and solar are the cheapest available. Renewable energy is undergoing a remarkable fall in costs that will displace all other systems, including natural gas. The latter claim is too early to call.

Figure 1 charts the change in the levelized cost of energy (LCOE) — a holistic measure of the minimum price required for an economic return for building and operating a new power plant — as reported by Lazard, a major financial advisory firm (note 1).

Remarkably, the power price needed for an investment in photovoltaic solar panels has fallen nearly 90 percent in eight short years. Onshore wind turbines have been more than slashed in half. Using the unsubsidized levelized cost metric, wind and solar are now the lowest cost electrons. 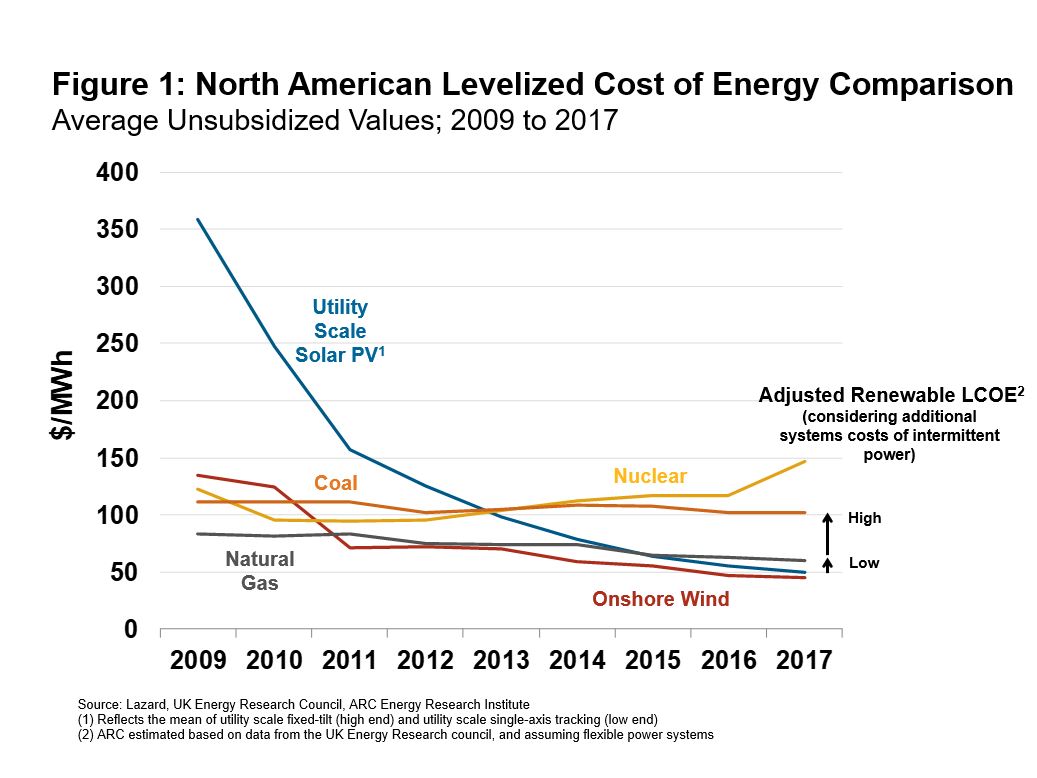 Improved economics help to explain the growth in solar and wind. According to the International Energy Agency (IEA), renewable energy increased 6.3 percent in 2017 driven by gains in wind, solar, and hydropower. Green power met one-quarter of the annual growth in energy demand last year.

Considering the cost advantage for renewables, why was 70 percent of the growth in world energy demand last year still met by fossil fuels, including oil, natural gas and coal?(note 2)

One reason is the sticker price for renewable energy does not tell the full story. Turbines and solar panels only make electrons when the wind blows or the sun shines. Even for the best locations, wind and solar generate power less than half the time. Contrast this to power generation from natural gas that is theoretically available 24 hours a day, seven days a week.

Because of their intermittent nature, renewable sources impose extra costs on the electrical system. One additional cost is for building backup generation to cover-off when solar and wind are not available. Quick responding electrons from natural gas ‘peaker’ plants and hydro dams are commonly used. While still expensive, electricity stored in batteries is also starting to be deployed for supporting renewables.

Another burden from solar and wind are extra transmission and network costs, for connecting the utility-scale renewable generation plants to distant consumers.

Based on their research, and assuming a flexible power system, we estimate that the additional costs from new renewable generation add between $US 13/MWh and $US 50/MWh4 to the levelized costs. The lower end reflects costs for achieving less than 30 percent renewables in the power mix, while the high side is more reflective of 50 percent. When the economics for renewables are burdened with these extra costs, then natural gas regains its competitive edge (see black arrows in Figure 1).

It is exciting to see the drop in renewable costs, but let’s not forget that in North America, natural gas has improved too. Levelized costs started much lower and have dropped further in the past eight years, facilitated by a 60 percent decrease in North American fuel prices.

I have no doubt that the electrons from low cost and zero carbon wind and solar will continue to grow, and the pace will accelerate. But natural gas is not being written out of the narrative, and will be part of the future energy mix. Considering its superior operating utility and low fuel cost, natural gas is still well in the game.

To explore the future of power generation, including the mix of renewables, natural gas and storage, attend the ARC Energy Investment Forum 2018, “Playing to Win,” on May 9th.