It was looking as if OPEC and Russia would deliver a lump of coal for Christmas, especially with President Donald Trump being an industry scrooge, wanting oil prices to go even lower. Yet the cartel delivered an early Christmas gift by announcing a production cut that appears large enough to stabilize international oil prices.

International oil prices have been slipping since October. Brent fell from US$85/bbl in early October to under US$60/bbl by the end of November, pushing down North American West Texas Intermediate (WTI) to US$50/bbl.

The price drop was especially painful for Western Canadian oil producers, who were witnessing record wide price differentials to WTI at the same time because of a surge of oilsands production that exceeded regional take away capacity, causing a local supply glut.

Concerned by the economic fallout that could result from such weak prices, Alberta’s premier took swift action to end the Western Canadian oversupply by mandating a 325,000 bbl/d cut to the province’s producers starting in 2019. The up-front curtailment is equivalent to 8.7 percent of total oil output.

The province’s action had an immediate, significant and positive impact on price differentials. Canadian heavy oils are now trading near US$13/bbl below WTI (spot), versus almost US$40/bbl on average in November. Canadian light oil is trading at a US$4/bbl discount (spot), versus an average near US$30/bbl in November.

Meanwhile, across the Atlantic Ocean another cut was in the works. Producers representing over half of global oil production were gathering in Vienna to discuss what should be done about the slipping international oil prices.

Growing production from Russia, Saudi Arabia and the United States was creating a global market surplus. On top of that, exports from Iran were not declining as much as first expected, since the U.S. granted waivers to eight countries in November, allowing them to import Iranian oil for the next six months.

In the absence of the recently-announced OPEC cuts, the oil market had the potential to be oversupplied in the range of 2 million bbls/d for the first half of 2019. Left unchecked, this excess output could have ballooned global inventories from today’s near-normal levels back to the record high storage levels experienced in 2016.

The stakes were high leading up to OPEC’s decision on December 7; there was plenty of uncertainty around whether the group would rein in overproduction yet again. Rumours swirled that Russia was not willing to cut. President Trump was applying pressure too, wanting to ensure low gasoline prices for his base. 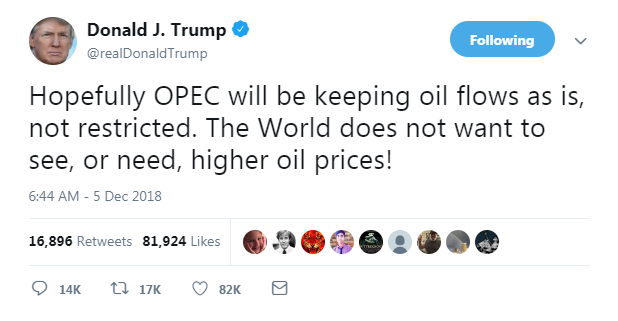 In the end, the cartel trumped Trump. OPEC+ announced a 1.2 million bbl/d cut to production levels for the first half of 2019. OPEC would reduce output by 800,000 bbls/d and non-OPEC, including Russia, agreed to cut 400,000 bbls/d. Figure 1 shows our outlook for global oil supply and demand for the first half of 2019, with the reduced production levels announced by OPEC+ and Alberta. 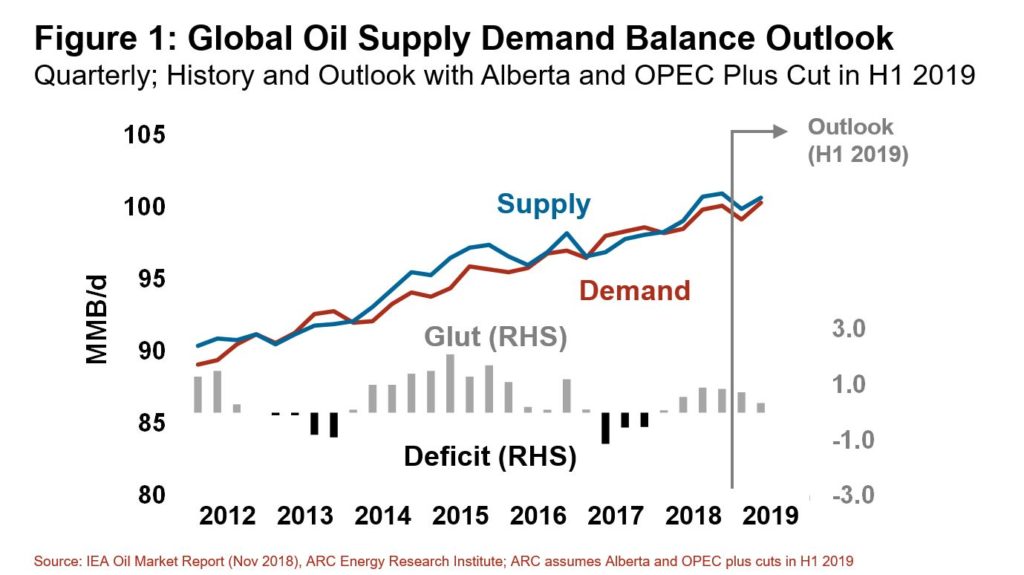 The picture is a slightly oversupplied oil market in the first half of next year. Last Friday, the markets responded positively to the change, with international benchmark prices moving up a few dollars per barrel on the news.

Since then, however, prices retreated on concerns that the OPEC group would not comply with the cuts, along with overall market weakness. But, assuming the group does deliver next year, the cuts do appear large enough to stabilize price.

For Canadian oil producers, domestic and international oil price support is a relief. The Canadian industry has proven it can do well with oil prices above US$50/bbl (WTI) and narrower price differentials.

It looks like that is where prices are headed in 2019, which is a gift compared to where the Canadian industry has been over the past month.