This article is part of the Fall 2018 edition of the Journal of the Canadian Heavy Oil Association.

The waterflooding of heavy oil reservoirs in the Western Canada Sedimentary Basin (WCSB) is challenged by adverse mobility ratios from high oil viscosities. Modification of injected water flow vectors via downspacing and/or the implementation of line drive injection patterns has resulted in strong performance in many pools (Beliveau, 2009).

Lab studies with high-perm sand packs and high-viscosity oils (Bryan and Kantsos, 2009; Wu et al, 2011) have demonstrated strong performance of chemical floods following waterflooding via a flow diversion mechanism, even though the chemicals employed might classically be expected to reduce interfacial tension.

Many heavy oils were created from lighter oils by microbial action (Larter et al, 2008; Wenger et al 2002). Heavy oil pools both globally and in the WCSB continue to host communities of microbes who respire anaerobically by transforming portions of oil to lighter and heavier compounds. Lab studies with reservoir fluid samples have shown that microbial communities go dormant when reservoir conditions change, often due to exhaustion of a key microbial nutrient (see also Head et al, 2006), and that the microbial community will be reactivated if appropriate chemical needs are provided. Renewed microbial respiration produces methane and sometimes surfactants; injected water flow paths are then altered.

The microbes of interest live in the reservoir’s waters near points of contact between oil and water at the pore level. They will move with injected water, and are thought to be dispersed throughout the reservoir, especially the swept zone.

This paper will describe results of microbial activation on the injection and production performance of a small waterflood in southeastern Alberta. Microbial activation and flow diversion were achieved quickly on a pool-wide scale, with results both positive and negative. “Days” are numbered from start of injection of activators.

The study area is an isolated compartment of a sandstone pool where mature waterflood operations are recovering 100 cp viscosity oil. It has a fan-shaped wellfield with one injector, three active oil producers, and one idle oil producer. The wells are arranged in two lines, one going north from the injector with producers here called “N1” and “N2,” and a second going to the northeast, with the idle producer “NE1” and active producer “NE2.” The injector is at the compartment’s southwestern edge, directly offset by N1 and NE1. Effective spacing is 15 acres per well. The compartment’s waterflood operations proceeded intermittently until five years ago. Recent injection and production operations have been continuous, excepting producer NE1 being shut-in on Day -478.

Well N1 produced much of the study area’s water. N1 went down due to a pump problem that reduced injection between Days 157 and 174. This sudden change in pressure distributions within the pool afforded vision into fluid flows, and how oil response to microbial activator injections was affected.

Baseline sampling of study area fluids indicated that the water was suitable for microbial habitation and biogenesis of methane. DNA sequencing showed presence of microbial species with an appropriate range of biochemical transformation capabilities. Review of pool history confirmed that a successful waterflood was in progress. An aqueous formulation of appropriate chemical microbial activators was designed, and then commercially blended in Calgary.

Prior to first injection of microbial activators, a slug of fluorescent dye was metered into the injection water. First arrival at producer N1 occurred in 23 days, at a superficial velocity of 8 meters/day. Maximum tracer concentration at N1 was seen in a sample at 89 days. Implication: permeable and heterogeneous reservoir rock. 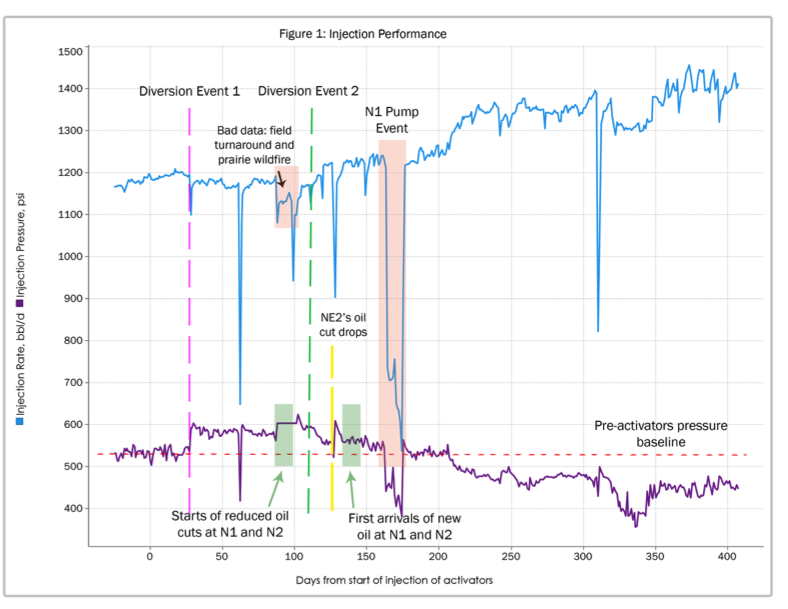 Also noted on Figure 1 are timing of flow alteration and arrival of new oil at producers N1 and N2; Diversion Event 2 (a subsequent sudden reduction in injection pressure); and of the onset of a significant loss of oil cut and oil production at producer NE2.

N1 is located 184 m from the injector. N1’s baseline production was 21 bbls/d at 2.9% oil cut. Figure 2 shows that on Day 81 (54 days after Diversion Event 1), fluid production at N1 started to exhibit unusual day-to-day chatter, plus a sudden drop in oil cut. In conjunction with Diversion Event 1, N1’s new performance is interpreted in the context of a viscous drag mechanism, with newly-diverted injected water arriving at N1. The oil being dragged along in this new line of flow made its first appearance on Day 134, as oil cut climbed to 5% and oil production rose to 38 bbls/d. 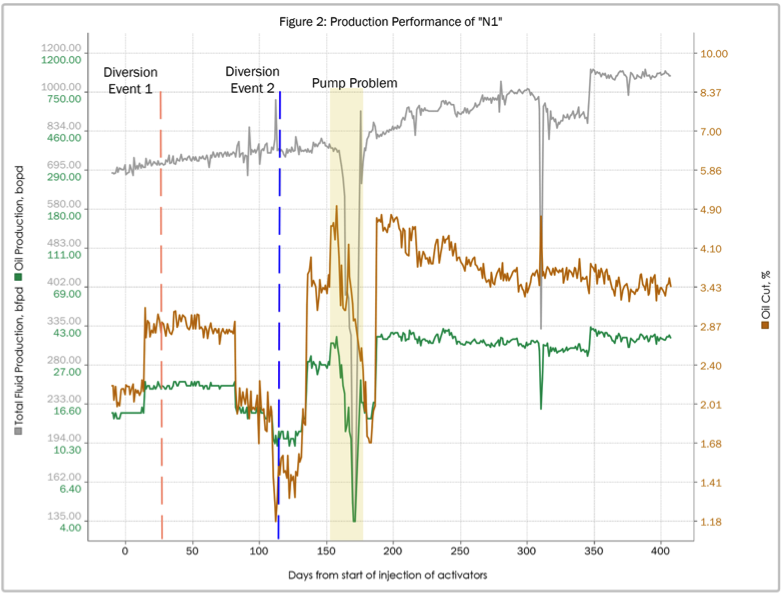 Although injection pressure started to drop (Diversion Event 2) on Day 113, new oil production at N1 persisted for 250 days, and is ongoing.

On Day 157 fluid production at N1 dropped as the downhole pump began to fail. Full production at N1, and the project’s return to full waterflood operations, occurred on Day 174.

N2 is located 400 m from the injection well. N2’s baseline production was 57 bbls/d at 12.7% oil cut. Starting on Day 89, the pattern of increased total fluid and decreased oil cut was again observed. Oil cuts increased at Day 144, temporarily raising oil production to as high as 74 bbls/d on Day 156. However loss of water injection rate due to N1’s upset interrupted this response. After the pool returned to full injection on Day 174 there were two more brief pulses of high oil production at N2, but neither was sustained. Decline of injection pressures back to and then below baseline injection pressure after Diversion Event 2, per Figure 1, are suspected of reducing flow velocities and hindering the dragging of oil.

NE2 is located 351 m from the injector, with baseline production of 31 bbls/d with 17.5% oil cut. As seen on Figure 3, oil cuts dropped suddenly on Day 128, 15 days after Diversion Event 2. Idle producer NE1 is located 165 m from injection, between the injector and NE2. When shut-in due to a downhole mechanical problem on Day -478, NE1 was producing 11 bbls/d at 3.1% oil cut. It appears that Diversion Event 2 created a new line of flow, directing injected water to NE2 via part of NE1’s swept zone.

Pumping at NE2 was ongoing during N1’s pump event from Day 157 to 174. Total fluid rates were reasonably steady. Oil cuts suddenly rose on Day 172 after pool injection water rates had dropped. Resumption of full water injection on Day 174 was followed by NE2 oil cuts dropping back down to 6-8% on Day 186. This performance is explained as NE2’s temporary return to the production of higher-oil-cut fluids from its former drainage area during the pool injection downturn. 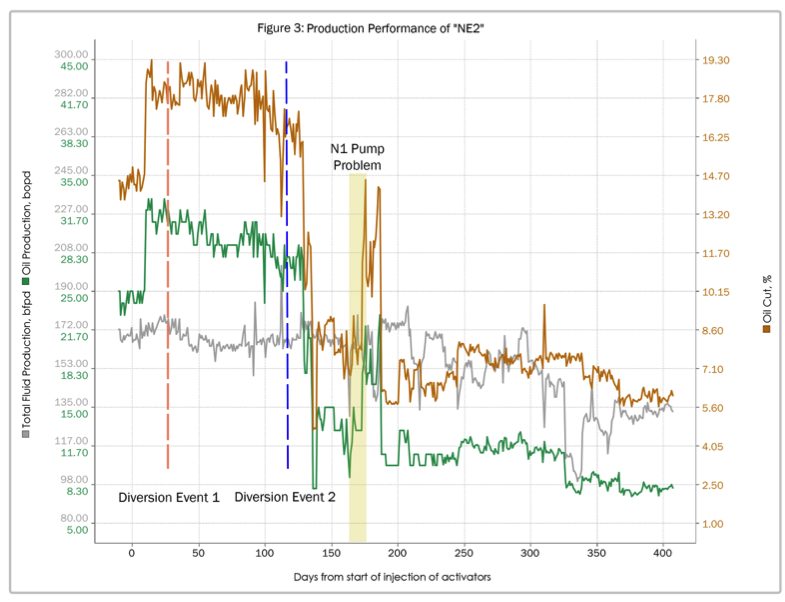 The resulting flow diversions can be constructive, significant and rapid, as shown here by oil production responses by the N1 and N2 wells.

However, the flow diversion mechanism is sufficiently robust to cause negative consequences when certain baseline distributions of water saturation and pressure set up possible vectors of new flow through reservoir that had previously been effectively swept.