Brazil secured an encouraging US$3 billion in bonus bids during key licensing rounds held last fall, according to a new report, which represents 23% of the country’s total upstream deal values since 2014.

This fresh investment, notably in offshore pre-salt basins, follows the introduction of significant regulatory changes to the oil and gas sector within Brazil.

It assesses the impacts on deal-flow and itemizes the bonus bids made by several global oil and gas powerhouses. It also highlights the key upstream deals within the other US$9.9 billion in upstream deals agreed in Brazil between 2014-2017. With a total of US$12.9 billion, Brazil witnessed more M&A activity in terms of pure deal values than any other Latin American nation. 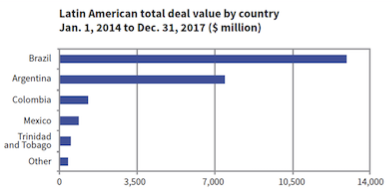 “As the political situation and Petrobras stabilize, Brazil should be well placed to attract significant investment, both in its prolific offshore basins and resource-rich but relatively untapped onshore basins.”

The full report, which includes analysis of M&A trends in Brazil, Mexico, Argentina and Colombia, is available for download here.