Encana is applying what it has learned about developing stacked oil and gas resources from the Permian Basin to Canada’s Montney play, and the company says the results are coming in strong.

This spring Encana introduced the market to the “cube,” its new base case for drilling in both plays. A cube is a multi-well pad that targets multiple stacked pay zones, where drilling and fracturing are completed simultaneously to improve results.

It’s now about 10 days into production from the first one in the Montney.

“We have the first 20 wells flowing from this 28-well cube in the North Tower portion of the Montney. Initial liquids are ahead of our expectations and generating an average liquids yield of 400 barrels of condensate per million cubic feet,” CEO Doug Suttles told the Barclays CEO Energy-Power Conference in New York last week.

“In other words, these are just like a Delaware well but they cost half as much: $3.5 million to 4.0 million apiece.”

Delaware is part of the Permian Basin play, where according to the US Energy Information Administration, costs average between $6.0 million and $7.8 million per well.

Of Encana’s approximately 11,000 drilling locations that have been identified as “premium,” 6,900 are in the Montney and 3,450 are in the Permian. The company operates in the Montney play through a joint venture with a subsidiary of Mitsubishi Corporation.

“In the Permian and the Montney we have thousands of feet of stacked pay. Our approach is aimed at getting the most value at the highest returns from this stacked pay,” Suttles said.

“Our Montney is highly efficient. The combination of wells that are highly productive that cost less than $4 million to drill and complete, plus the effect of our joint venture carry, leads to production efficiencies in the range of $3,500 to$4,500 per flowing boe." 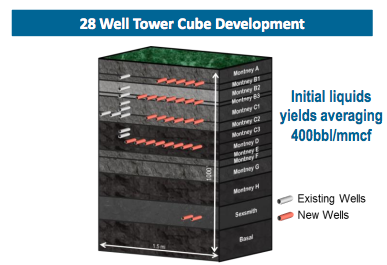 The company is increasing its focus on the Montney play, which straddles northern Alberta and BC. Construction is currently underway on three new processing facilities, two of which Encana says will be completed in the fourth quarter, with the third following early in 2018.

"By increasing the number of Montney wells drilled in 2018, we improve our overall corporate production efficiency," Suttles said.

“In order to efficiently drill and complete wells to fill these facilities, we are drilling and completing wells throughout the year, while the production largely doesn't come onstream until late this year and early next year. This has a drag effect on 2017 but improves 2018."

Canada’s trade minister praised US passage of a landmark tax and climate-change bill, playing down the potential for conflict over what was…