Energy systems—the production and use of fuels and electricity—are under intense pressure to change for the good of the environment and the economy.

However, the flow of energy through these systems is not the problem.

Rather it is the flow of carbon, especially when those flows bring carbon dioxide (CO2) and methane (CH4) to the atmosphere where they become greenhouse gases (GHGs).

Six months ago, Canadian Energy Systems Analysis Research (CESAR) released Sankey diagrams for Canada showing how energy flows, from the sources we extract from nature to the demands of society for fuels and electricity.

Today, CESAR released a new set of Sankey visualizations—the first of their kind—showing how carbon flows through the same fuel and electricity systems.

These new Sankey diagrams come with a brand new and improved web portal where the user can toggle between the energy and the carbon Sankeys for a given province or year to explore 1056 different Sankey diagrams.

The portal has a number of other new and useful features that users can learn about by checking out the brand new User’s Guide to Energy-Carbon Sankeys. Literally hours of fun for energy systems nerds!

The title of this post (originally published on the CESAR website) gives a nod to the 1992 US presidential election: Bill Clinton strategist James Carville outlining one of three campaign pillars for workers as “the economy, stupid.”

CESAR tries to highlight a few of the things that one can learn by focusing on carbon. For the record, in saying "stupid," CESAR says it pointing to itself. Its focus, even the CESAR name, has been about energy, but the core problem is carbon.

Comparing the Energy and Carbon Sankeys

Figure 1 provides a side-by-side comparison of energy (Panel A) and carbon (Panel B) flows associated with the production and use of fuels and electricity in Canada in 2013. There are many similarities and some important differences between the two visualizations.

In CESAR Sankey diagrams, the nodes on the left-hand side represent the energy (Figure 1A) or carbon (Figure 1B) content of all the energy resources produced in (i.e. Primary energy or carbon) or imported into Canada. 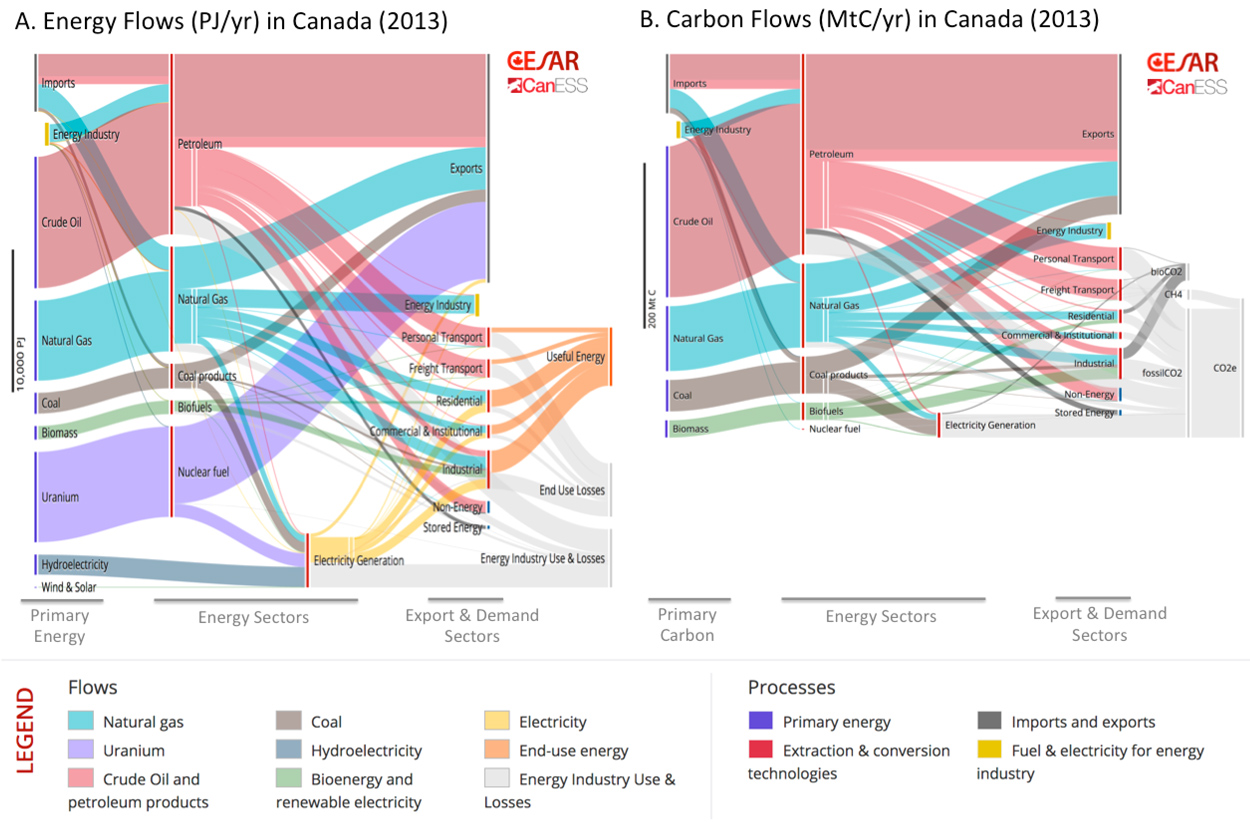 Figure 1: The flows of energy (A) and carbon (B) through the fuel and electricity systems of Canada in 2013.

The nodes in the middle portion of the Sankey represent the companies in the energy sectors. They convert the energy (and carbon, if present) into fuels and electricity that are then either exported or passed to a number of demand sectors.

These include transportation demands (personal and freight), building (residential, commercial and institutional), energy using industries (cement, agriculture, chemicals, etc), and non-energy uses (plastics and asphalt) Some recovered energy and carbon has little or no commercial value (e.g. petcoke), so it is stockpiled (mostly in northern Alberta) and allocated to an node called "stored energy" in these Sankey diagrams.

In the energy Sankey (Figure 1A), the energy that was consumed (or lost by venting) through domestic processes is depicted as orange and grey flows lines that were either attributed to delivering the valuable end-use service (i.e. useful energy) or consumed as a "conversion loss" in the process of providing the fuel/electricity or end-use service. While all this energy still exists, it is highly dispersed (i.e. low exergy) and therefore of little economic value.

Exergy is the energy that is available to be used. A fuel that can create, on combustion, very high temperatures relative to the surroundings has high exergy since the differential temperature can do some valuable work.

In the C sankey (Figure 1B), the grey flows are predominantly in the form of carbon dioxide (CO2), the end product of fossil fuel combustion. However, some fossil carbon may be in the form of methane (CH4), a potent GHG that can leak to the atmosphere.

The dark grey flows on the right side of Figure 1B represent the flows of CO2 from the combustion of bio-based fuels.

Although similarities exist in the two Sankeys shown in Figure 1, there are substantial differences that reflect variations among feedstocks in their carbon: energy content.

As shown in Figure 2, the C content of energy feedstocks vary widely, from zero for nuclear, hydro, wind and solar to about 24 or 25 kgC/GJ for coal or biomass. 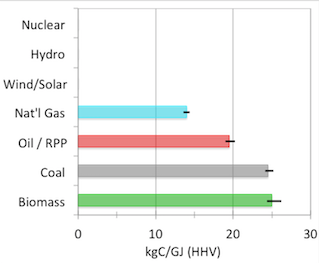 Figure 2: The carbon content of energy feedstocks in Canada’s fuel and electricity systems. The black lines represent the range of values for each feedstock type, while the bar shows the typical value.

Oil and most refined petroleum products tend to have 19-20 kgC/GJ while natural gas is about 14 kgC/GJ. Consequently, some of the energy flows do not appear on the carbon sankeys (nuclear, hydro, wind) while others (esp. coal, biomass) become proportionately larger relative to the flow for natural gas.

It is important to note that this C only accounts for the C that is contained within the energy feedstock itself; it does not provide information on how that C may contribute to GHG emissions. Nor does it reflect the life cycle emissions associated with recovering, refining and transporting each energy resource.

So what can we learn from a closer study of the Carbon Sankey for Canada (Figure 1B), insights that could not be gained from the Energy Sankey (Figure 1A)?

To extract the maximum amount of energy from fossil fuels, they need to be combusted in the presence of oxygen to produce CO2. This reality is reflected in the light grey flows to ‘fossilCO2’ in the C ankey (Figure 1B). Each tC as CO2 contributes one tC as CO2 equivalent (CO2e) GHG emissions.

Figure 3: Details of the C Sankey showing the origin of CO2 equivalents.

However, fugitive emissions of fossil C (especially gaseous methane) does occur in Canada’s fuel and electricity systems, and those flows are tracked within the CanESS model. When displayed in the Sankey diagram (Figure 1B or Figure 3 for a higher resolution perspective), the flows are small compared to "fossilCO2."

However, methane is a potent GHG, with a global warming potential of 9.1 tC as CO2e per tC as CH4 (see footnote 1). Therefore, the CH4 C flows are multiplied by 9.1 to calculate their contribution to GHG emissions measured as tC as CO2e.

It is important to note that the C Sankey in Figure 1B only shows the GHG emissions coming from fossil C feedstocks. Process-based CO2 emissions such as that associated with cement or steel making are not shown in these Sankey diagrams, nor are the CH4 or N2O emissions associated with Canada’s agricultural systems or landfills.

In Figure 1B (or Figure 3), the dark grey flows on the right side of the Sankey diagram show the magnitude of biomass flows to the atmosphere as a result of their use as fuels. However, in agreement with international convention, these emissions do not contribute to Canada GHG emissions (CO2e in Figure 1B or 3).

The convention assumes that the plants from which this bio-carbon is obtained had recently (i.e. within the last year for crop plants, or the last century for trees) removed it from the atmosphere. Under international agreement, countries are expected to report C stock changes in their managed biological systems to ensure they are being sustainably managed.

Canada does report these numbers (see footnote 2), but the reported carbon stock changes are not counted in national totals for GHG emissions, nor are they shown in Figure 1B since those flow only include the biocarbon associated with fuel and electricity production and use.

3. Following the carbon from source to demand.

In addition, 21 MtC in wood and agricultural biomass were used for energy, and an additional 72 MtC were imported in the form of petroleum, natural gas and coal.

The nodes on right side of the diagram show where all that carbon went. Half of the total carbon – fully 194 MtC – was exported as oil (130 MtC), gas (41 MtC) or coal (23 MtC). This carbon would almost all have ended up in the atmosphere when the exported fuels were burned, but the responsibility for those emissions rests with the importing country (primarily the US). Another 178 MtC, (including 21 MtC of “biogenic” carbon from biomass combustion) was emitted into the atmosphere in Canada, from power plant stacks, residential and commercial building chimneys, personal and commercial vehicle tailpipes, and industrial energy consumption, including the fossil fuel industry itself.

All totalled, 95% of the carbon taken out of the ground ends up in the atmosphere. The remainder is stored or sequestered, mostly in plastics and other non-consumable petrochemicals (16 Mt), with smaller quantities in oil sands tailings and petroleum coke stockpiles (7 MtC).

By focusing on the light grey flows in any of CESAR’s carbon Sankeys, users have a rapid and easy way to explore the origin of the emissions of fossil carbon. Hint: on the web portal, hover your cursor over the flow of interest and a pop-up will appear to giving you the number of MtC flowing through that part of the fuel and electricity system.

The energy industry’s emissions were split evenly between power plants (29 Mt) and the oil and gas extraction and processing industry (30 Mt).

The remaining 62% of fossil CO2 emissions in 2013 (97 MtC) were associated with the demand sectors, and more than half of that (34% or 53 MtC) came from transportation, both personal and freight. Fossil carbon emissions from buildings accounted for 13% of 20 MtC and the remaining 16% (24 MtC) were from the energy using industries of Canada.

Overall, these visualizations reveal the rivers of carbon from their headwaters in the primary production of fossil fuels and biomass through to their final emission into the atmosphere from the smokestacks, chimneys and tailpipes of our industrial plants, buildings and vehicles.

In this post, CESAR provided a few directions for navigating these rivers and encourages readers to use the new portal to compare energy and carbon Sankeys, explore how they have changed with time, and how they compare among provinces (especially using the per capita option).

The international dispute over Line 5 belongs in federal court, a Michigan judge declared Thursday, dealing a critical blow to…