It is not the strongest of the species that survive, nor the most intelligent, but the one most responsive to change…. We must, however, acknowledge, as it seems to me, that man with all his noble qualities ... still bears in his bodily frame the indelible stamp of his lowly origin. – Charles Darwin, Origin of the Species

Our species and technology are at a crossroads. Our amazing human ingenuity has created amazing machines and—for the first time in our species existence—those machines are starting to create other smarter machines at scale. The changes are exponential and combinatorial. It is a phenomenon with which many “non-nerds” are now becoming familiar called Moore’s Law.

Simply stated, we have observed over many decades that the price/performance of computation is doubling approximately every two years—what is commonly called an ‘exponential’ function. The scary / exciting thing is that it is happening not only to computation power (i.e. speed of computers, phones, etc) but to other technologies like the capacity of solar power, the capabilities of Gene Sequencing technologies and the like. In addition, these technologies are are starting to combine in the many companies of the new global entrepreneurial economy. Most worrisome, is that these exponential technologies—once invented—never disappear. These ‘genies’ are never placed back in the bottle. Good or evil.

But the human animal—both physically and culturally—is still evolving at Darwin’s pace. Our foundational structures of governance and education (for example) have to date only been able to respond in linear ways—at best. At a more “atomic” level, perhaps the most linear of all of our ‘systems’ is our ability as individual humans to adapt to new ideas, people and cultures. This resulting gap—called disruption by many—is growing and is unsustainable. Left unchecked, it will likely not end well.

The answer it seems to me is that the human species needs to figure out how to adapt—exponentially.

There are many ways of thinking that can help us move forward. Here’s one:

In Alberta, we have adopted a concept for our innovation ecosystem that is based on the lessons of Complex Adaptive Systems called the Rainforest Framework. Centered on the seminal book by Victor Hwang and Greg Horowitz, the book and its research informs us that the key to advancing an ecosystem—small or large—is to start with Culture. The authors note that if we are able to create a culture of trust, pay-it-forward and the like—and make it an explicit prerequisite of participation—then we can “step on the gas” with great effect. Velocity—whether linear or exponentially—can only happen when individuals are acting in a way that eliminates the friction of mistrust, winner-take-all philosophies and lack of diversity.

So how does this ecosystem experiment we are conducting in Alberta relate to the broader challenges of Darwin and Moore’s Law? The answer we believe is to change the way we understand and define our primary adaptive strategy—namely innovation. We are experimenting with a new definition of innovation that meets hyper-disruption head on. This new definition suggests that we cannot move forward as a species unless we move technology and governance together.

In short our new definition of innovation is:

“The advancement of the human condition through changes in technology matched by equal or greater advancement in social governance.”

Simply advancing the technologies that make our world easier and comfortable for an unbalanced few is not enough. As we measure technical advancement we also must include measures of how we are progressing socially. Our ability to sustain and capacity to absorb technological change MUST be present to increase the velocity otherwise we will continue our march to inequality and unsustainable growth. In a previous blog I called it the “Innovation of Ways versus the Innovation of Things.”

We can see this everywhere in our history. The environmental movement of the 60s, for example, coming on the heels of three decades of uninterrupted post war growth is no longer possible in an era of exponential change. This is a critical difference: The speed of change today is exponential and combinatorial—meaning we can’t wait for social movements and institutions to “catch up.”

Here in Alberta we are adopting a new social contract and creating a common, collective voice that is beginning to bridge economic, political and cultural silos. Our belief is that once established, we will—if we continue to embrace its philosophies—be able to push harder and move faster. We will be able to overlay a culture of entrepreneurship within this full definition of innovation and create significantly increased velocity and change.

I recently watched an excellent TED talk by Dan Pollata called “The Dreams We Haven’t Dared to Dream.” In his talk, Dan eloquently notes that while human ingenuity has exponentially increased the transistors on a chip for the past 40 years, we have not applied the same exponential thinking to our dreams nor human compassion. As he says, “we continue to make a perverse trade-off between our future dreams and our present state of evolution.”

Some describe this ethical stasis as “the tyranny of the OR”

As the great Stephen Hawking said:

If machines produce everything we need, “the outcome will depend on how things are distributed. Everyone can enjoy a life of luxurious leisure if the machine-produced wealth is shared, or most people can end up miserably poor if the machine-owners successfully lobby against wealth redistribution. So far, the trend seems to be toward the second option, with technology driving ever-increasing inequality.”

It begins with a new definition of Innovation that matches Darwin to the relentless march of Moore’s Law. 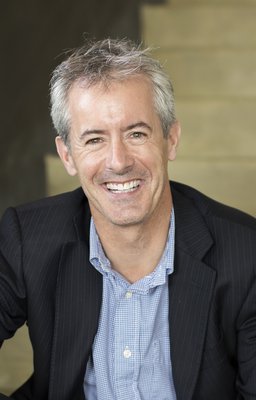 Jim Gibson is a Calgary-based serial entrepreneur, an active leader in the Alberta innovation ecosystem, author and founder of the Rainforest Movement (www.rainforestab.ca) that seeks to move the needle forward in the culture of innovation in Alberta and Canada. His blog on innovation is here at http://thespear.co and his upcoming book, “The Tip of the Spear: Our Species and Technology at a Crossroads,” will be available in the fall.