Alberta’s energy industry last year used the same amount of non-saline water as in 2013 despite a 44 per cent increase in production, according to new report from the Alberta Energy Regulator (AER) designed to drive improved performance from the industry.

The Alberta Energy Industry Water Use Report provides data on water used in a number of production methods for oil and gas (from hydraulic fracturing and enhanced oil recovery [EOR]) and mineable and in situ oilsands.

Its the second piece of the AER's industry performance program to increase transparency, following the regulator's report on pipeline performance released in February.

“Albertans depend on us to make sure the energy industry is using water in a responsible manner,” Jim Ellis, AER president and CEO, said in a news release.

“This report provides Albertans with a better understanding of how water is being used to produce oil, gas, and bitumen.”

Energy development forms a small part of all non-saline water allocated in the province, accounting for approximately 10 per cent of all water allocated in Alberta. The remaining 90 per cent is allocated to other users such as agriculture, forestry, commercial (e.g., golf courses, gravel pit operations), and municipalities.

Generally, energy companies are using less water than what is allocated to them. In 2016, 10 per cent of all non-saline water (i.e., shallow groundwater or water taken from a lake or river or run-off collection pond) in Alberta was allocated to energy development. Of that, roughly 22 per cent was used, meaning that only 2.2 per cent of all non-saline water allocated in the province was used for energy development last year. 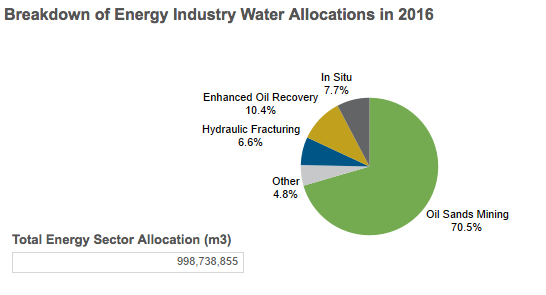 In addition to non-saline water, companies may also use alternative water sources (e.g., saline groundwater — salty water found deep underground, produced water, wastewater, or recycled hydraulic fracturing water). While they do not have to apply to the AER to use saline water, companies are required to report how much they’ve used. 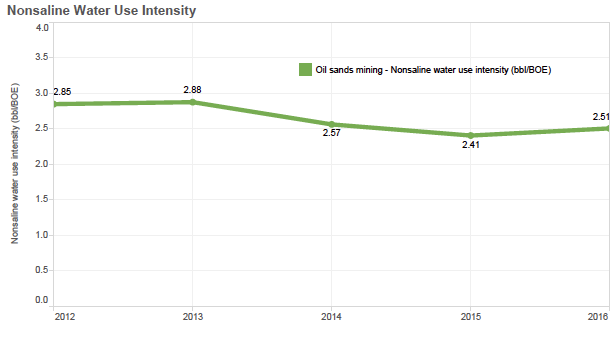 The report shows that oilsands mining continues to be the largest user of non-saline water. Over the past five years, an average of 2.7 barrels of water was needed to produce one barrel of oil equivalent (boe) compared with hydraulic fracturing, EOR, and in situ which averaged less than 0.5 barrels of water per boe.

The report also highlights industry efforts to recycle water resources. In 2016, EOR and in situ recycled roughly 90 per cent of all water used, as both technologies operate on a cycle where water and steam is continuously injected into the same wells. Hydraulic fracturing recycled about six per cent of all water used due to the limitations of storing or transporting hydraulic fracturing fluids.

Although oilsands mining recycles water using tailings ponds, data is unavailable because companies are not required to report this information to the AER.

A five-year trend shows that non-saline water use for EOR has decreased by 25 per cent as production from EOR decreased by 16 per cent due mainly to reduced EOR activity across the province.

The amount of water used for hydraulic fracturing in Alberta varies each year, depending on economic conditions and the number of wells that are drilled and fractured.

Since hydraulic fracturing in horizontal wells is a relatively new use of the technology, water use intensity is expected to vary as operators test different strategies and methods to optimize hydrocarbon production.