Spend any amount of time with Krzysztof (Kris) Palka and you quickly realize you’re not in the presence of your average oil and gas engineer. At 55 years of age, this self-described energy-efficiency freak is stepping into a role that he’s been grooming himself for since the mid-1990s when he first put his master’s of engineering to work for his oil and gas employers, making them more efficient and innovative.

A three-year Harvard Business School education emboldened him to launch PumpWELL Solutions in 2004. Over the next decade, he helped his clients get the most out of existing and new wells using a technology he developed alongside an innovative just-in-time artificial lift optimization service.

His new role as chief executive officer of AlwaysBLU combines his fanaticism for energy efficiency with penchant for long-term thinking and pursuing the triple bottom line. The company’s goal is to make carbon-negative plastics.

Google “carbon-negative plastics” and your search will quickly lead you to California-based Newlight Technologies. It has commercialized a carbon capture technology that combines air with methane-based greenhouse gas emissions to produce a plastic material called AirCarbon.

AirCarbon matches the performance of oil-based plastics and out-competes it on price, according to the company’s website. Last year, Newlight announced a 15-year technology licence agreement that allows Paques Holdings to manufacture, process and sell bioplastics based on Newlight’s AirCarbon conversion technology at a rate of up to 1.3 million metric tons per year. Computer company Dell also turned to Newlight Technologies to pilot AirCarbon in the manufacture of protective bags for its products.

The twist on this theme is that Palka’s AlwaysBLU aims to manufacture carbon-negative plastics from discarded food waste. This not only takes on the carbon-emission issue but also another looming environmental challenge.

“Food waste is a global problem of enormous magnitude,” he says. “Roughly one-third of the food produced in the world for human consumption every year [approximately 1.3 billion tonne] is wasted. Food losses and waste amount to roughly US$680 billion in industrialized countries, with organics such as fruits, vegetables, roots and tubers having the highest wastage rates of any food.” 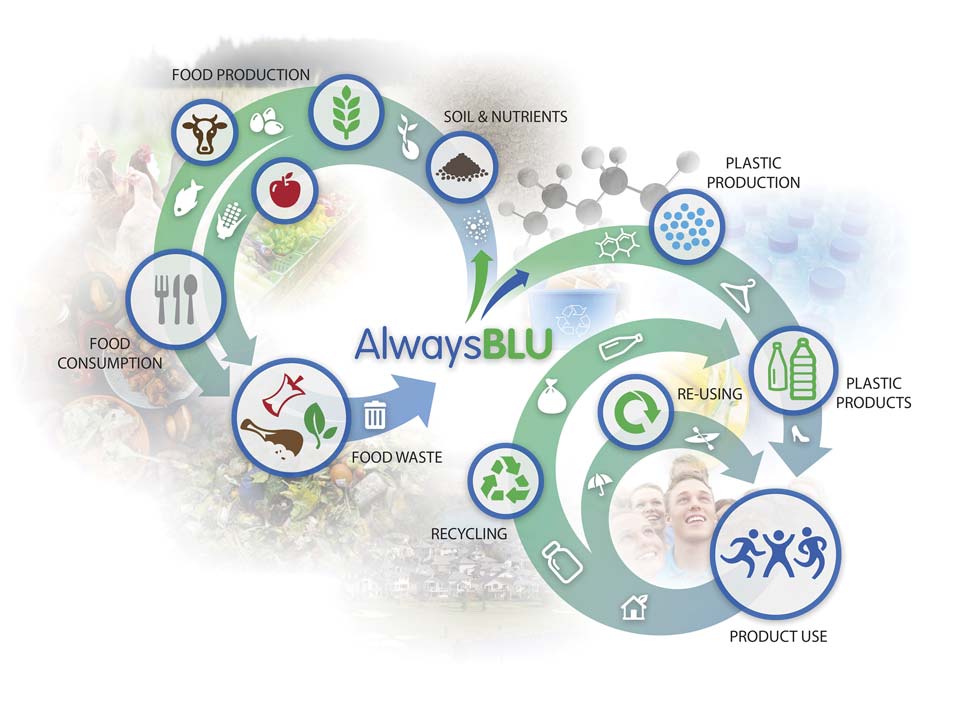 Capturing food waste’s embedded organic value in composting is as old as agriculture itself and has been part of numerous recently launched municipal programs, such as the City of Calgary’s Green Cart pilot program, which starts in mid-2017. While composting is better than landfilling, it still is only a partial solution because composted food waste still releases its CO2 content back into the atmosphere. Similarly, burning food waste for power generation captures the stored energy but releases carbon emissions and combustion by-products.

AlwaysBLU’s vision is to recover the nutrients from food waste as a high-quality organic fertilizer for food production and also take the rest of the hydrogen and carbon embedded in that food waste and convert it into carbon-negative polyethylene and polypropylene. Those polyethylene and polypropylene pellets would be identical to those derived from petroleum so that end producers of plastics could use them without retooling.

He says the technology for this food-waste-to-plastics process is already “known and utilized today.” The most challenging dimension of the work will be to bring those technologies together and scale them down into the manufacture of modular and repeatable plastics production units that can be sold to communities around the world.

At this stage, Palka can’t disclose any more details of the process “as it may compromise our ability to raise money.” (Newlight doesn’t reveal its technical details, either.)

If food-waste-to-plastics sounds expensive, it is. Palka estimates that initial production of polyethylene and polypropylene will be five times as expensive as petrochemical-derived equivalents. But that price includes all the front-end design work and associated costs of building one production unit. As production of these food-waste-to-plastics units scales up, those costs could drop to just two times that of petrochemicals. That additional cost is further diluted when polyethylene pellets are converted into final plastic products. That additional cost will be absorbed by the market he is targeting.

To fully appreciate the business strategy, however, requires seeing beyond the nominal additional costs of packaging a bottle of shampoo in a bio-plastic container that can then also be recycled over and over again, and selling to a relatively narrow, typically affluent, market segment. It’s the full picture of cumulative benefits that make this business proposition compelling.

In other words, it’s a vision of a carbon-negative circular and sustainable, distributed economy that many people believe the world needs to move toward.

If “all the stars align,” AlwaysBLU could roll out a commercial demonstration facility in about three to four years. That facility would process about 10,000 tonnes of food waste into 6,300 tonnes of high-value organic fertilizer and about 500 tonnes of carbon-negative base material for plastics.

“We think that this would be something close to our final size because we want to build in a distributed way to have a simple, cost-controlled, cookie-cutter size. If people need more capacity, they could buy two or three of these units for their municipality [which] could be deployed anywhere in the world,” Palka says.

Palka has brought together a team of technical people and chemists to work on this project with him. In the meantime, he’s also continuing his work as a consulting engineer.

“How cool would it be if this technology came from Calgary, Alberta, where our ingenuity and hard work can be used not only to produce non-renewable resources but also to embrace a cleaner, greener and more equitable future for everyone,” he says.