Cost control efforts in the construction of complex oil and gas projects often overlooks what happens when a project is finished, when the engineering, procurement and construction (EPC) company hands over the detailed engineering information to the project owner.

In a new survey of 50 North American project owner/operators, experts and academia, 98 per cent of respondents said they experienced unexpected costs and delays to operational readiness due to not having the right information at the right time.

A further 85 per cent reported unexpected charges to fix information problems, costing as much as $1 million. Delays in start-up and operations, in some cases, ran into weeks and months, representing lost opportunity costing millions of dollars per day.

“Owners knew they had problems with handover, but they weren’t exactly sure. This report can help us teach owners a better way, especially for oilsands projects or offshore projects that are very capital intensive and are pressured by low crude oil prices,” says Amish Sabharwal, executive vice-president of Americas at international engineering software company AVEVA, which commissioned the research.

The goals of the study were to understand how widespread handover problems are and, ultimately, to help owners reduce their costs and make project construction more economic.

The root of the problem

In the construction of complex oil and gas assets, the input of hundreds of processes and individuals across multiple disciplines creates vast amounts of engineering data. That data needs to pass from the EPC to the asset owner because much of it is needed for start-up and operations.

AVEVA’s survey found that more than two-thirds of owners didn’t have all the information they needed at the point of handover. Half of the respondents said they didn’t plan for handover or did but did’nt think about it until the end of the build process. And 52 per cent didn’t have an information management system in place to support the engineering information that needed to be shared.

“Handover, in its existing form, is wasteful, inefficient and not sustainable,” Sabharwal says.

The fix, he says, is to have a handover strategy up front that identifies the key engineering information the project owner needs and includes a plan to transfer that information. Better yet, the use of a cloud-based information management platform essentially eliminates the handover. 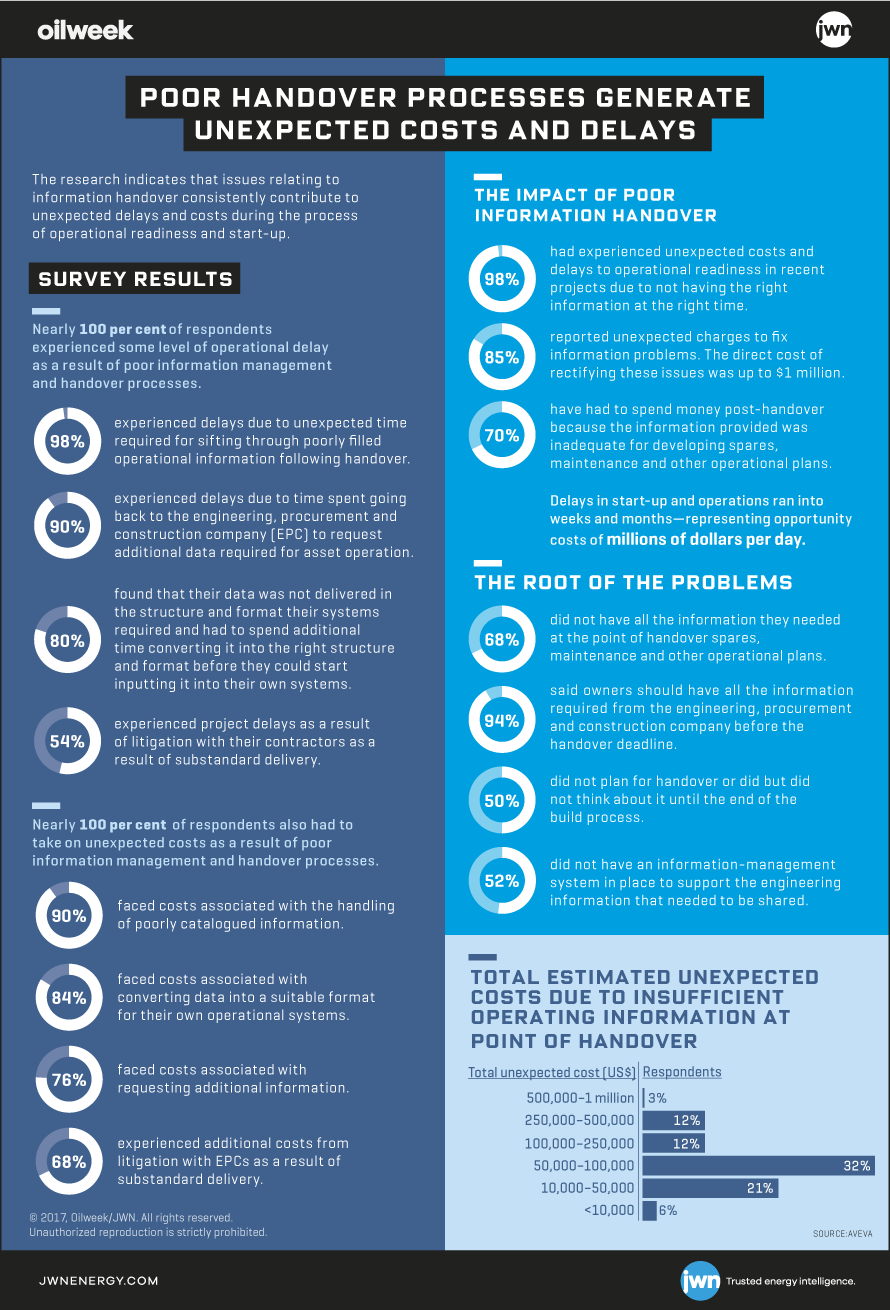 The handover problem has deep roots in the early days of large projects, when truckloads of manuals were delivered from the EPC to the owner. These were then sorted, validated and directed to multiple locations for reference by different teams.

As information technology progressed, new digital systems captured and stored the information. CDs and DVDs replaced binders of documents. Some of this was compatible with the owner’s IT systems, but some of it had to be reformatted and loaded into various operating systems, which could take up to two years to complete.

Still, a number of problems remain. Across the thousands of documents moving between formats and systems, there is plenty of room for errors to be introduced. If information is not filed, named or tagged correctly, it becomes very difficult to find. Missing information might not be spotted until after the project has been finished.

Often information exists across multiple documents for different purposes, so an update to one document can lead to inconsistencies in the data. A lack of data integration means that this document-centric approach doesn’t provide the owner with an information resource that could be usefully reviewed and cross-referenced.

“But owners are getting smarter at this,” Sabharwal says. “They’re asking, ‘Why do we have two different systems? EPC has a system to create all this data, and then I have to put it into my system.’”

One of AVEVA first clients in Calgary was Husky Energy. Five years ago, it started helping Husky’s thermal oil group change its philosophy about managing information, a shift that has allowed Husky to lower its engineering costs.

“They’re a great example of a company that has identified their engineering information up front,” Sabharwal says. “They put in place a philosophy of getting that content right away and having visibility of that content so they don’t have any difference between their operational systems and their engineering systems. It’s just one system that the whole community uses.”

Working on a common platform with customers can also help.

“A cloud facilitates virtual engineering drafting table. The owner is sitting there. The EPC is doing the work, but they’re all huddled around a common platform where they can see what everybody is working on. Everybody can see it in real time. That changes the game in terms of project execution,” he says.

It also changes the game in terms of the handover by eliminating it altogether. Rather than sending snapshots at 30, 60, 90 per cent completion and documents, and waiting for the owner to check and send back the changes, the owner is privy to the engineering process as it progresses and, consequently, has everything for start-up and operations.

Sabharwal says this more efficient approach to information management can benefit all aspects of oil and gas asset engineering, whether greenfield construction, brownfield expansion or maintenance.

“Engineering information, in its truest form, supports the business processes and operations, whether that’s maintenance, reliability, compliance or safety,” he says. “Each of those things requires engineering content. We’re working with owners to lasso that information and have it as current as possible and drive improved efficiencies and lower costs.”