It is possible for the oilsands industry to simultaneously—and in dramatic fashion—reduce its costs and emissions profile, turning the tables back to growth despite powerful competing resource opportunities and a looming GHG cap, says the Canadian Energy Research Institute (CERI).

A new CERI study released Friday identifies six technology configurations for in situ oilsands production that have the potential to reduce costs by 34-40 percent and emissions by more than 80 percent, consequently delaying the time until the 100 Mt emissions cap is reached “by several decades.”

Any one of the six configurations would reduce to zero the chances of reaching the cap by 2036 (it is currently expected to be breached in 2028).

CERI says the high supply cost of in situ oilsands projects, which is currently about $45/bbl, is intertwined with the industry’s high emissions. Contrary to what one might expect, addressing one will address both.

“They show that emissions and cost reduction objectives are not adversely related. This means the two objectives can be achieved simultaneously.”

Even by just choosing to implement the configuration with the lowest cost reduction goals would result in dramatic emissions cuts, CERI says.

The caveat: “further research and development work is needed to de-risk the promising technologies through pilot and field demonstration studies” if the opportunity is to be realized.

It will also take significant investment, particularly as five out of the six configurations apply to greenfield, or brand-new projects, versus expansions or modifications of existing facilities.

“Greenfield development benefits from a high flexibility to combine various compatible technologies within and across the different process segments,” CERI says.

Here are the technology configurations and tables that show their supply cost and emissions reduction impacts. 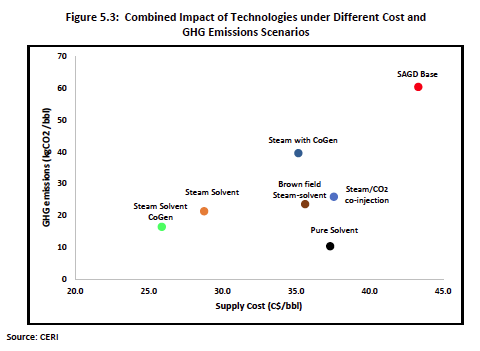 This configuration uses direct contact steam generation (DCSG) with co-injection of steam and CO2, and the use of an evaporator in water treatment.

The DCSG is a technology that allows steam to be produced by directly contacting water with hot flue gases (a mixture of CO2 and steam) to vaporize the water without the need for boiler tubes, CERI says.

“The entire product gas is to be injected into a reservoir where some of the CO2 is expected to be sequestered.”

This configuration comprises cogeneration of steam and electricity by solid oxide fuel cells and evaporator use in water treatment.

The fuel cells generate energy directly by chemically reacting a fuel (hydrogen, hydrocarbons or carbon monoxide) and oxygen, rather than by combustion, with an overall efficiency of 80 percent.

“Here, natural gas is used as fuel and only steam is injected into the reservoir for bitumen recovery,” CERI says.

The electrochemical water treatment process refers to the front-to-back process, which is made up of a dissolved gas flotation unit, a high temperature electrocoagulation unit, a filtration step, and rifle tube boiler. An ion exchanger can be added after a filter press for polishing.

The steam-solvent cogen technology configuration uses a combination of steam solvent reservoir technology, solid oxide fuel cell-cogeneration of steam and power and the front-to-back water treatment process. A mixture of steam and solvents is injected into the reservoir, CERI says.

Pure solvent technology (such as the Nsolv process) precludes the use of steam for bitumen recovery. Consequently, steam generation and waste water treatment segments are of no significance, CERI says. However, the process still requires treatment of produced water and energy for solvent heating and purification. 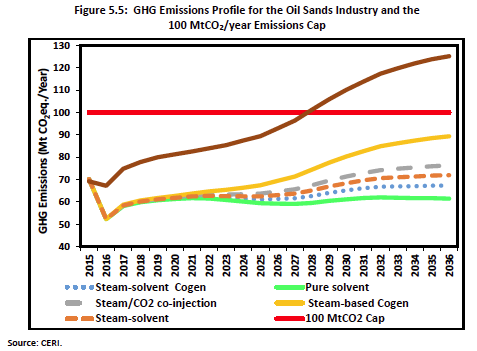 Greenfield SAGD costs down 25 percent, not yet economic but getting there: CERI
​These charts show when in situ oilsands costs could drop and by how much
Minnesota court affirms approval of Line 3 oil pipeline
Quantifying GHG emissions from non-operated assets
G-7 drops aim to shift new car sales away from oil by 2030
Shell mulls sale of U.S.’s largest oil field during climate push