Even through the depths of the downturn, big companies and intermediates with the right management teams and assets in the right plays had access to capital.

The financial system wasn’t broken like it was in 2008-09. Investors simply fled the sector because of the commodity price rout. It was only a matter of time before things turned around, and 2017 has brought a lot more optimism to the picture, according to investment experts.

Industry cash flow is more than double today what it was this time last year. There’s more money for operations and a sense that debt and equity markets will open up to less proven explorers and producers (E&Ps) looking to move beyond cash flow budgets. But whether that optimism becomes reality remains to be seen.

“It’s still too early tell if the constraints around capital access will fall away in the course of 2017,” says Rob Cook, managing director of Calgary’s ARC Financial. “Everyone’s cautiously optimistic that there will be more debt and more equity available, but that’s really going to just depend upon the willingness of the banks to extend credit.”

Producers, on the other hand, will be very cautious accessing debt, even if credit is available. They don’t want to be caught in the same position as last year if commodity prices soften.

Meanwhile, the cost of equity is coming down as share prices recover and concerns over shareholder-value dilution give way to new opportunities in some companies with support in the equity markets. Bond issues on the private market, which traded at a significant discount early last year, are recovering as yields come down along with the cost of debt capital. So things are moving to higher ground, but the severity and duration of the downturn still casts a long shadow on access to capital for many E&Ps. 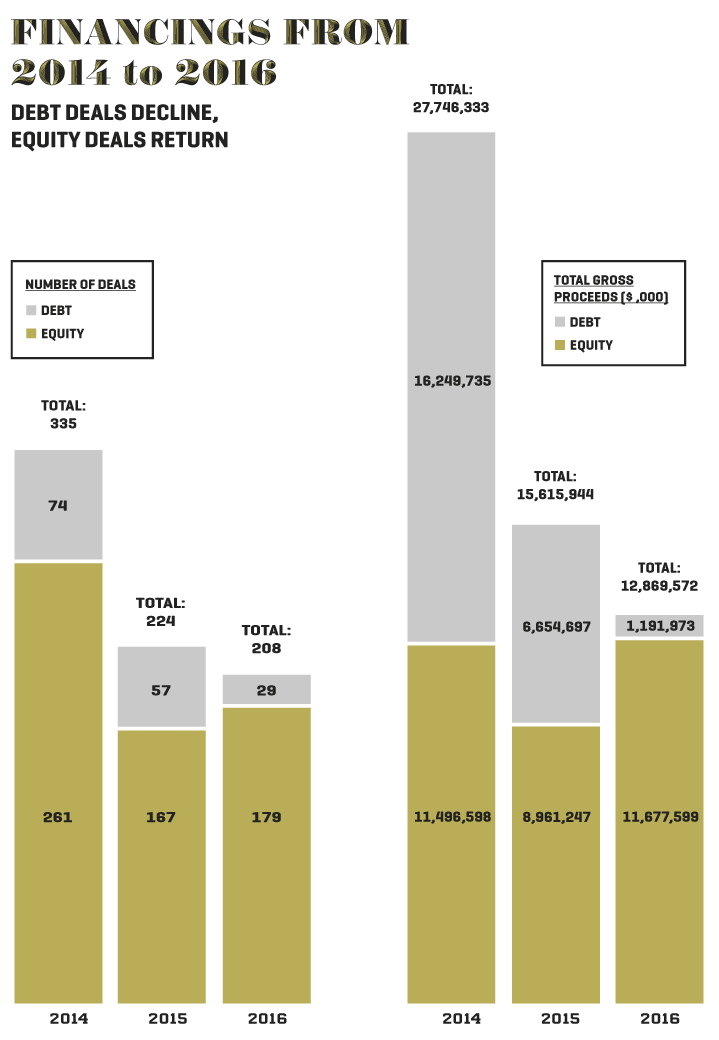 When oil prices are strong and producers are making money, there’s ready access to capital because investors want to be in energy. When oil prices are weak, that’s not the case. Is it more complicated than that? Unfortunately, yes, because so much has changed in the last two years. For one thing, what is a strong oil price now?

For oil prices to remain in the $50 range, OPEC member compliance to their stated cuts will be key. How strongly U.S. tight oil production comes back will play a role too. Already in February, bloated U.S. oil inventories called into question whether OPEC cuts were enough to sustain a price recovery—and that was before the U.S. oil production kicked in from an optimistic early ramp-up in drilling.

Then there is the perception of Canada’s competitiveness versus a U.S. producer’s, given new federal and provincial greenhouse gas levies and rising services costs. In other words, uncertainty is ensuring that the main source of capital for western Canadian E&Ps in the near term will be cash flow and a lot of it will still be used to pay down debt, according to Cook.

“Returns are strong enough to drill the wells, but they’re not so attractive that there’s much extra,” he says. “So it’s all about cost control and execution and hitting the numbers. I think there’s also a lot of projects that are not economic yet.”

Management teams with a proven track record will be able to access new equity this year, but Cook doubts that “will go all the way down market.” For many companies, the equity markets will remain closed as investors remain highly selective.

As for foreign private equity, Cook doesn’t expect too much of an uptick in activity, particularly since many largely private Canadian E&Ps are backed by U.S. private equity.

“We’re very much competing with investment opportunities in the U.S.,” he says. “The Permian basin remains very hot, and the E&Ps there are attracting U.S. private equity. For [that capital] to come across the border, they would really have to see a compelling Canadian growth story.”

As for Asian capital, it’s anyone’s guess. Many Asian investors are still nursing burns from buying into a high market. But some analysts believe a new breed of Asian investor is in the wings and may be ready to take advantage of opportunities in a recovering down cycle.

“One of the themes I talk about in our global perspective is a return to aggressive acquisitions by Chinese companies into North America, including Canada,” says Barry Munro, national leader of oil and gas at consultancy EY. We’re just waiting to see whether that’s a speculation or reality. There are some who advocate that this will be by a new breed of Chinese companies that aren’t your traditional state-owned companies.

“When you move beyond all the short-term noise…the Chinese have a longer-term view, and I think you will see them come back to being net buyers. They will look to North America as a politically stable place to do business, and I think you’ll see it in 2017.”

Peter Williams, managing partner and chief executive officer of Calgary-based private equity group Annapolis Capital, says that, while $55 oil improves access to capital for some companies, more will be needed to extend that access to early-stage E&Ps.

“The reason for that is just how long and protracted this downturn has been,” he says. “You will have to see demonstrative returns demonstrated before capital will return to the space. For institutional investors, it’s been a long run without capital being repatriated and without any meaningful returns.”

Williams believes the industry will show investors those positive returns in 2017 and into 2018. Companies have cut operating costs through the downturn, improved efficiencies, refocused and accumulated land in some cases and are now ready to translate those hard-won efficiencies into meaningful results.

“The very thing that brings capital back is good returns—whether that means four or five or six or seven significant success stories,” he says. “We’ve seen time and time again how quickly capital comes back into the space when the market sees a trend of success.”

Capital is an international commodity, and U.S. resource plays are getting all the attention these days. At least in the U.S. Closer to consumer markets and typically with a lower regulatory and environmental cost burden, U.S. E&Ps are winning the battle for investors’ wallets. At least with the big investments.

As for the early-stage E&P financings of between $35 million and $150 million that Annapolis Capital focuses on, “that heavy lifting is being done by Canadian private equity, and we really don’t see a lot of competition from our U.S. brethren,” Williams says.

Lex Capital Management, a Regina-based private equity group, has found a similar niche. It focuses on small Saskatchewan producers, and its funds have even attracted investors across the border.

The exchange rate is the biggest part of those competitive economics in Saskatchewan, but Saskatchewan land costs also play a role.

He’s quick to add, however, that despite attracting some U.S. capital, Lex only raised $142 million. A large pension fund wanting to place $50 million wouldn’t fit in the conventional plays of southeastern Saskatchewan or Alberta.

“On top of all that, when we are raising money in the U.S., rather than focusing on the economics, I spend an inordinate amount of time talking about pipeline access, regulatory hurdles, red tape, carbon tax—all these challenges that the U.S. shale oil plays aren’t really facing,” Popil says.

Canada has, what Popil calls, a group of “very fickle” investors.

“Once a team has had some struggles, it’s very difficult to raise capital. So your cost of capital is gone. Companies like the Raging Rivers, the Crescent Points, the Whitecaps—that have historically been the investor darlings—will have money thrown at them. Any time they want to raise capital, they’ve got a bought deal for whatever they need,” he says.

“You’re almost better off to be private, and you’ll attract more capital from private equity players that won’t touch the public markets,” he says. “That’s why you’ve seen Arc and some of the big private equity firms actually taking some of these public companies that are completely undervalued, paying almost twice the share price because it’s still a good deal for them and taking them private.”

Popil expects to see more of that happening in 2017, especially in the micro-cap space.

Royalty-interest buyers—in contrast to working-interest buyers—share in production revenue without exposure to the capital costs, operating expenses and environmental liabilities associated with oil and gas production. Compared with working interest, royalty interest can have significantly higher netbacks with much less risk—a pretty sweat deal for those buyers.

For producers, the upside is cash.

The Pengrowth, Baytex and Athabasca royalty-interest deals were all oilsands deals. In building oilsands projects, there is a long lead time before getting to production. All that capital commitment puts a strain on a company—strain that some E&P companies in the wider industry are feeling right now.

Jim Kinnear, chair and chief executive officer of Kinnear Financial, says that royalty-interest deals are worth considering because they don’t dilute a company’s equity or burden it with more debt, and they don’t require selling mature assets.

“The oil and gas business is capital-intense, and companies are always in the business of raising capital in whatever way they can. That’s where we see the opportunity,” he says.

As one of the original founders of Pengrowth as an energy royalty trust, Kinnear recalls how people initially struggled to understand the advantages of a royalty trust.

“It was new, and it was different, and it took many years for them to really understand the positive benefits of the royalty trust. Of course, I’m biased since I was in the business,” Kinnear says.

It took years for people to understand the concept, and when they did, the royalty-trust era made a lot of sense to a lot of people. So it may take some time for people to get their minds around royalty-based finance as well.

“To use royalties as a financing vehicle for this sector is still a little bit different,” Kinnear says. “But for some moderate-sized companies, that might be one of the few areas that they could get access to new capital to develop their business. They may be in a good play like the Montney or Bakken, and this provides an alternative.

“The investors, on the other hand—and we need investors to finance this—get some cash flow and a return on their investment. We started this six years ago, but we think it’s an idea whose time has come.

Baker Hughes Co. expects as many as four liquefied natural gas projects globally to move to a final investment decision…

Solar and hydrogen to flourish in 2021 as green spending grows

The race to decarbonize the world is on, and 2021 is set to break fresh records for investment and installations…