After decades of on-again, off-again exploration, the jungles of Peru have yet to yield large deposits of oil and gas to treasure seekers.

“Peru must face the fact that it’s not a real oil-producing country,” a report written for a U.S.-based environmental group recently concluded—and a New York-based energy analyst who specializes in South America agrees.

The report—written last year by Alberto Rios Villacorta, a professor at Ecuador’s Technical University of Ambato—offers a forecast of the country’s energy path through to 2025 and suggests it focus on developing renewables and on energy-efficiency measures. It was written for the fossil fuel–unfriendly group International Rivers.

But a fossil fuel industry expert says the statement is essentially valid.

“It has the only LNG export plant in South America, and it’s a big part of its economy. Their crude production only averaged 40,000 bbls/d in 2016, down 30 per cent from the year before and, at the end of the day, the reserves aren’t there.”

In fact, she says Peru has reserves of about 700 million barrels “and that’s even small by Latin American standards, making it a tough environment to attract investment.”

On the other hand, its natural gas reserves, while not in the trillion-cubic-metre range seen in other gas-rich countries in South America such as Argentina, are relatively significant at about 400 billion cubic metres, she says.

The problem is that most of its production comes from one area, the Camisea fields, which are located in the environmentally sensitive Amazon in the northern part of the country. Indigenous groups in the area have long objected to the development of those reserves.

In February 2015, 400 indigenous people, led by the Federation of the Native Communities of the Corrientes River, occupied 14 gas wells in the central area of Peru known as Pichanaki, causing Pluspetrol SA, the major gas producer in the Amazon region, to stop production in the area. Protests by the group led to the death of one protester and the injury of 75 others, including a police officer.

In addition, indigenous protesters have taken control of wells operated by Pluspetrol in the Amazon, which covers about 60 per cent of Peru’s land surface.

The federal government has since negotiated a truce, but tensions remain.

If that wasn’t enough of a challenge to its gas-producing prospects, the country faces other roadblocks.

One is the changing competitive landscape for Peru LNG, the US$3.8-billion LNG export plant that went into operation in 2014. The plant is owned by a consortium including Hunt Oil Company, SK Energy, Royal Dutch Shell and Marubeni.

“Its biggest market has been Mexico,” says Roberts. “But that country is now getting most of its gas by pipeline from the U.S., so it will have to search for other markets going forward.”

The bad news for the LNG owners is that the most logical market for the country’s gas is domestically, since most of the country’s industry is hundreds of kilometres away. 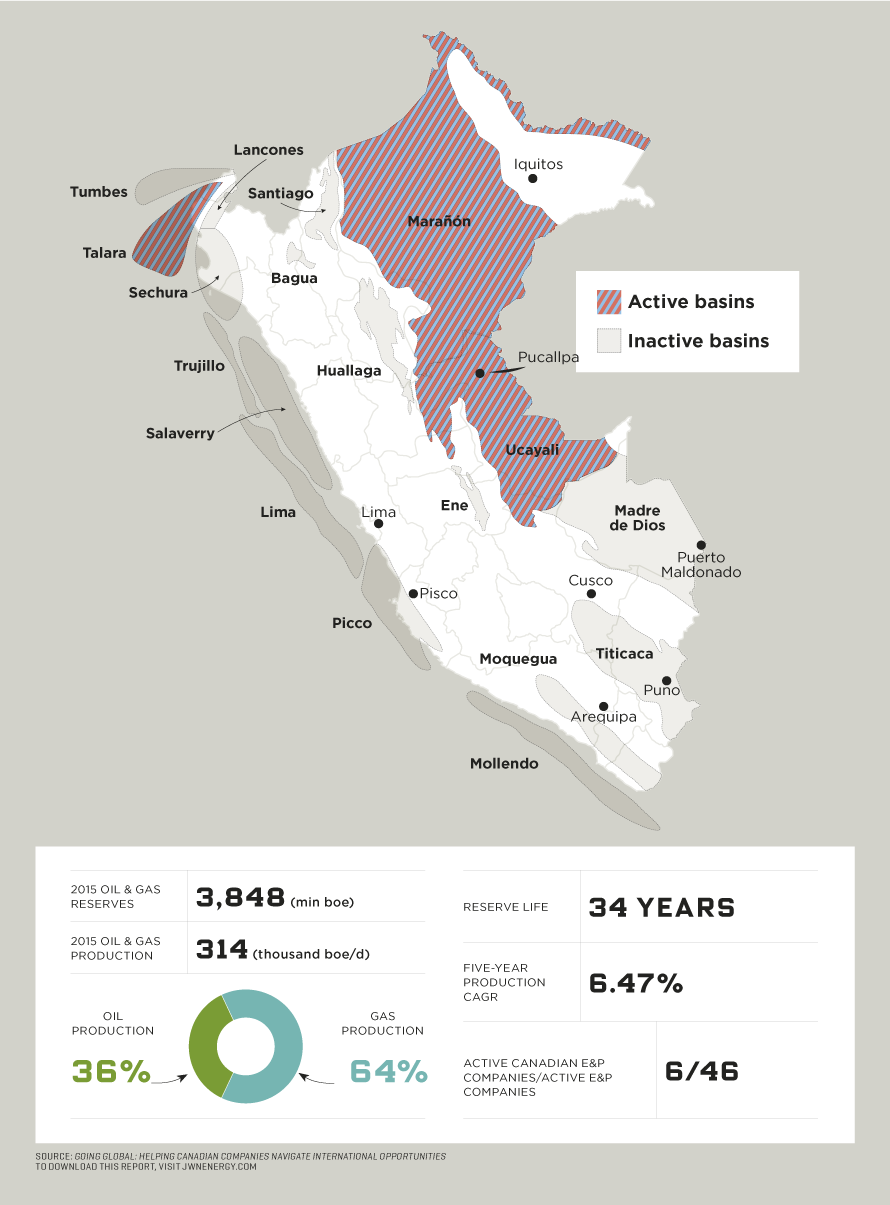 The country’s leaders thought they had that problem solved in mid-2014, when a consortium led by Brazil’s Construtora Norberto Odebrecht (75 per cent owner), along with Spanish transmission system operator Enagás, won a contract from state agency Proinversión to invest about US$4 billion to US$5 billion in the construction of the Gasoducto Sur Peruano (Southern Gas Pipeline), which was to stretch more than 1,000 kilometres from the Camisea gas fields to Ilo Moquegua, near the Chilean border. A new US$7.3-billion petrochemical project, the largest plant ever built in the country’s history, was to be developed there.

The pipeline would have supplied gas to the country’s large mining sector, as well as allowing gas to be exported to Bolivia.

Then Brazilian and Peruvian politics intervened.

Odebrecht, the majority owner of the gas pipeline, for which it and its partner had won a 34-year concession, was one of 16 companies mired in the “carwash scandal,” which involved the equivalent of multi-billion dollar bribes collected by those companies from Brazilian state oil company Petrobras.

The construction company’s chief executive faces 19 years in prison and the company is on the verge of bankruptcy, so work has stalled on the pipeline.

In early November, Odebrecht announced it had sold its remaining 55 per cent stake to U.S.-based Sempra Energy for US$5 billion. It had previously sold a 20 per cent stake to Peruvian-based construction company Graña y Montero, which has taken over project management.

But another wrinkle appeared in late November when Sempra announced it was withdrawing from negotiations to buy the stake after Peru’s government rejected a request to void a clause in the sales contract that annuls the contract if acts of corruption are discovered. Given the clause would make any new company involved in the project responsible for bribes or kickbacks paid by Odebrecht, Sempra decided it could not ethically be involved.

There have been reports that Odebrecht had paid bribes to former Peruvian president Ollanta Humala.

Peru, like many South American countries, has been mired in a history of political and corporate corruption.

For instance, current President Pedro Pablo Kuczynksi has been involved in three highly publicized corruption scandals since taking power this past year, one of which led to the resignation of a cabinet minister. Kuczynksi has stood firmly against striking the corruption clause in the pipeline contract.

Government officials say the pipeline, already under construction and about 40 per cent complete, requires an investment of US$950 million this year.

“It’s something the new president has highlighted as a priority,” says Roberts. “The mines and other industries now use diesel,” which is far more costly than gas would be.

As if the delays in developing that key gas pipeline don’t present enough challenges for the country’s oil and gas sector, a history of oil spills in the Amazon, where a key pipeline passes through, have muddied the waters even more—and Canada-based Pacific Exploration & Production, has been sideswiped by the fallout.

State-owned Perupetro, which owns the 1,106-kilometre North Peruvian Pipeline that moves crude from the Peruvian Amazon to the Pacific Coast, halted the movement of oil through that line after a series of seven spills in the Amazon in 2016.

The first two spills last winter leaked about 3,000 barrels, after which the pipeline was shuttered for repairs. Five additional spills have taken place since.

Petroperu blames the spills on vandalism. However, Peru’s pipeline regulator has attributed the spills to poor conditions on the pipeline, which went into operation in 1976.

More than 190 oil spills have been recorded in Peru since 1997, with about 10,000 barrels spilled in the environmentally sensitive Amazon.

For Pacific Exploration subsidiary Pacific Stratus Energy International, the shuttering of the pipeline means it has virtually stopped producing oil at its Block 192. French oil company Perenco has also stopped producing from nearby Block 67.

Pacific took over the block in September 2015 after Argentina’s Pluspetrol’s 30-year contract for the block expired. The block may be handed on to Petroperu later this year, according to newspaper reports in Peru.

In an emailed statement to Oilweek, Pacific Exploration confirms that it has been affected by the pipeline problems.

“The production in Block 192 is currently suspended due to problems in the (North Peruvian) Pipeline,” it read.

However, Pacific went on to state that “the company expects to open part of Block 192 in the first quarter of 2017 and have it fully operating between the second and third quarters of this year, depending on Petroperu’s actions.”

It went on to say that it is currently producing 5,790 bbls/d in the country, although “Pacific E&P has a production capacity of more than 16,000 bbls/d.”

In addition, it does have gas production potential in a nearby block.

“Although Pacific E&P does not produce gas in Peru, it has significant reserves in Block Z-1 awaiting materialization of a commercialization project.”

The company went on to say that it is looking forward to new commercial terms for oil and gas producers, to be announced by Perupetro this year. It is expected to contain a proposal for lower royalties and other incentives.

It went on to state that, depending on oil prices, “the company expects a favourable evolution, which, in addition to the significant potential of the blocks licensed in the country, will allow the execution of the exploratory plans.”

Calgary-based Gran Tierra Energy, which is focused on oil production in Colombia, also holds assets in Peru. It produces about 3,095 bbls/d there now and, in a December presentation, detailed plans to spend US$6 million this year on exploration in the country. Total planned company capital spending this year will be between US$200 million to US$250 million. Most of its 34,000–38,000 bbls/d is expected to come from Colombia.

In that presentation, it announced plans to spin out its Peruvian assets into a separate company, in which Gran Tierra will maintain an equity interest.

“The proposal contemplates that SpinCo (the new entity) would engage in external capital raising activities to fund the ongoing development of the Peruvian assets,” it said in a mid-January release.

Gran Tierra touts the prospects of Block 95, where it holds the Bretana North and Envida Lobe assets. It says the best estimate of contingent resources (light oil) in the two areas is 39.8 million barrels of oil equivalent.

It also holds blocks 123 and 129 in the Maranon Basin, where it has five prospects and is planning to drill exploration wells.

In addition, it holds blocks 107 and 133 in the Ucayali Basin, which is in the Camisea area. It says it had a recent discovery there in a trend with “prolific hydrocarbon accumulations.”

The blocks together hold hundreds of millions of barrels of potential resources, it claims.

Roberts, the Fitch Group analyst, says her company believes the country’s natural gas potential will be attractive in the future for producers, although it has a nuanced view of its oil potential.

“There’s still a lot of upside [for gas producers],” she says. “We’re optimistic on the demand side.”

With a population of 32 million, domestic demand for natural gas could be significant going forward, she says.