Despite depressed oil and gas prices being expected to continue well into 2017, a majority of companies do not anticipate difficulty accessing financing for operations, according to Oilweek's 2017 Oil & Gas Industry Outlook Survey, a further sign the worst of the downturn in the oilpatch may be coming to a close.

Almost half of respondents said operations financing would primarily come from free cash flow in 2017, while 11 per cent said it would come from debt, nine per cent from equity and six per cent from the proceeds from divestments (25 per cent were unsure). 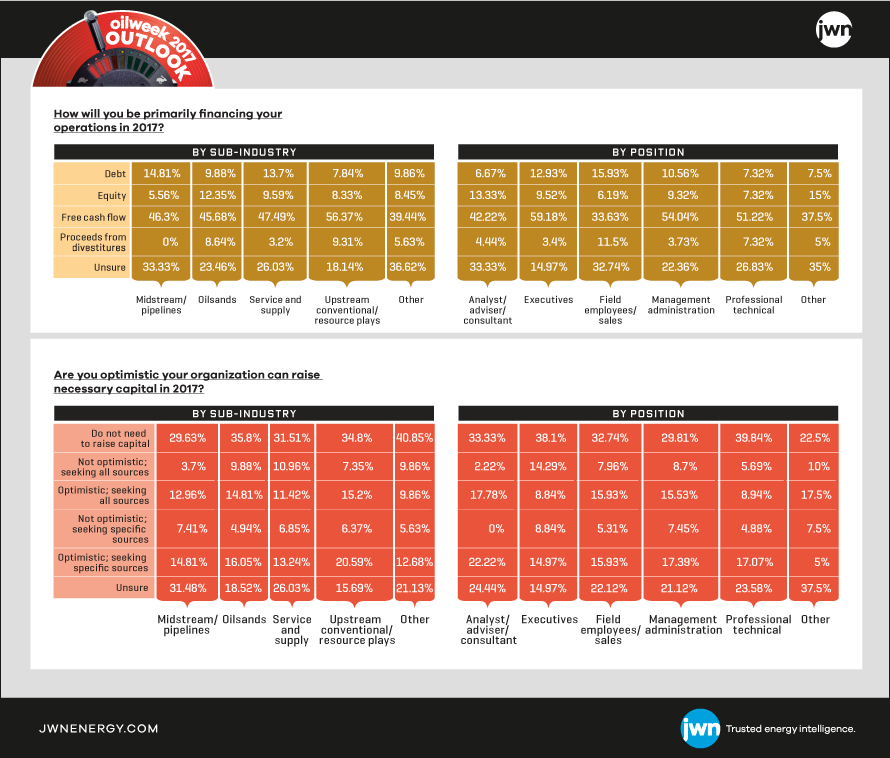 In general, the smallest companies, those with fewer than 100 employees, were most likely to forecast greater reliance on debt than free cash flow compared to larger firms. And where capital is sought, from either specific or all sources, the smallest companies are least optimistic about securing it, and the largest companies, those with more than 1,000 employees, were most optimistic, reflecting the greater ease of raising funding among larger firms with more assets.

Fortunately, the smallest companies are also the least likely to be seeking capital—38 per cent said they don’t need to, compared to 29 per cent of the largest companies.

Company executives and management/administration staff are particularly confident in raising financing via free cash flow, at 59 and 54 per cent respectively, compared to just 42 per cent of the analyst/adviser/consultant group (which also scored higher in the “unsure” category). On the other hand, the analyst/adviser/consultant group is most optimistic about organizations securing what they require, while executives are least optimistic.

An analysis from CanOils in 2016 found that while the total value of Canadian oil and gas company financing arrangements being completed has fallen since the commodity price downturn, companies have still been able to raise finance. Looking at all TSX- and TSX-V-listed oil and gas companies that produced up to 100,000 boe/d in their operational results, CanOils found that around $8.6 billion in gross proceeds was raised between 2015 and 2016 (down from $13 billion in 2014) with either equity financing or debt financing, and it was increasingly trending to equity-based arrangements rather than debt.

With capital expenditure budgets slashed across the board and companies focusing on sustaining operations rather than development during the nadir of crude pricing, repaying debt was the main motivational factor behind most deals in 2015 and 2016, CanOils says. There was also a significant amount of cash raised to fund acquisitions and pay off the debt included in those acquisitions.