Colombia might be best known for its coffee, but like its Latin American counterparts of Brazil and Mexico, the federal government’s reliance on oil and gas revenues has meant the nation is struggling to balance its books in a world of sub-$50 oil, says an expert on the country’s energy industry.

Mara Roberts, the New York City¬–based senior oil and gas analyst specializing in North and Latin America at BMI Research, a Fitch Group Company, says that although the country’s right-leaning government has a reputation for being investor friendly, it is increasingly relying on state-owned Ecopetrol as it struggles to generate the 25¬¬¬–30 per cent of revenue the energy industry has provided it with through much of this decade.

“Ecopetrol controls about 65 per cent of the oil and gas market, and that will probably go to 70 per cent,” says Roberts, who is Colombian by birth. It’s never going to 100 per cent though.”

The bad news for Colombia is the sucking sound that is being heard as capital from big players, such as ExxonMobil and Chevron, finds its way to the more promising offshore prospects in Mexico, with ready access to the large U.S. market, and Brazil, where offshore elephants are being discovered. 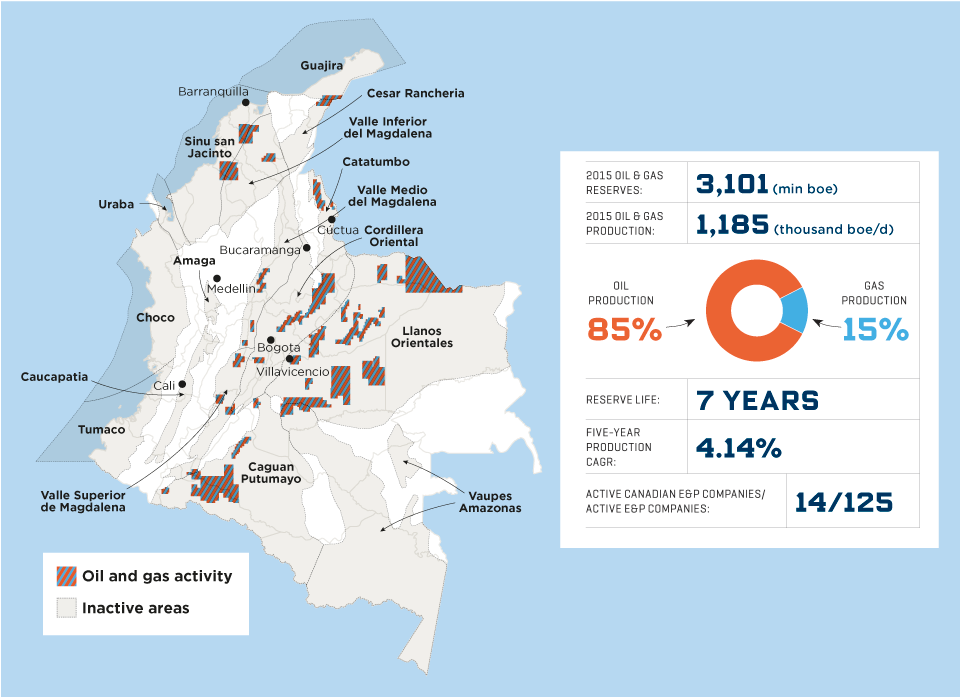 However, the government of President Juan Manuel Santos continues to negotiate a peace agreement with FARC after one was narrowly rejected by voters in a referendum in October.

In mid-November the government announced a new deal aimed at reducing opposition to an accord. It includes a clause that required FARC to turn over all of its assets to the state to be used for reparations for victims of the many years of guerilla violence. In return, FARC members won’t face prison time.

The oil price collapse of the last three years played a role in the declining interest of private sector oil and gas investors in the country since it is a relatively costly place in which to operate, says Roberts. But the security problems didn’t help.

“You saw an increase in attacks on oil and gas infrastructure and kidnap threats from FARC starting in 2012,” she says. “It was more about sending a message to the government to negotiate a peace deal than about money. That was happening before the price collapse.”

But there was another problem: diminishing returns from investments that had already been made by oil and gas companies.

“The investments we were seeing in oil and gas exploration were yielding poor results,” she says. “Even at $100/bbl they weren’t worth pursuing.”

She said the government held an auction round for oil and gas fields in 2014 “and there was almost no interest.”

“Oil and liquids production hit one million barrels daily [earlier this decade], and that’s now down [to a forecast 951,920 bbls/d],” she says.

“Colombia has gotten squeezed out of the U.S. market. The long-term story is that imports of crude from Latin America to the U.S. are going down. Latin America will have to look to Asian demand.”

In the 10-year Colombia Oil & Gas Report, which Roberts contributed to in August, Fitch sees crude and liquids production at 856,100 bbls/d by 2025 with lower production for much of the 2020s.

Based on a forecast Brent crude price of US$57–$71 between 2017 and 2020 and rising slightly thereafter, Fitch sees nothing that will lead to any boost in crude and liquids production going forward.

That’s based on its assumption that there will be continued opposition to fracking in the country, where there have been widespread protests, meaning the country’s fairly significant unconventional oil and gas resources will remain largely undeveloped.

Roberts says another impediment to the development of unconventional land-based resources is the lack of a sophisticated oilfield service sector in the country.

Fitch says the country faces declining production of crude and liquids in the Chichimene, Castilla and Rubiales fields, where much of its conventional production has been concentrated.

While the country appears to have significant offshore oil and gas potential, with some major recent finds, including Petrobras’s Orca-1 natural gas discovery in 2014, interest has been somewhat tepid in light of lower oil and gas prices.

Norway’s Statoil has announced the signing of farm-in agreements with Spain’s Repsol for deepwater licences in a number of fields, but little new drilling has been undertaken.

Anadarko Colombia is the most active driller in Colombia’s Caribbean Sea with interests in 16 million acres across nine blocks. Anadarko, which is partnered with Ecopetrol, has announced a major natural gas discovery in the Grand Fuerte area with oil located at deeper areas of the play. It has also announced a handful of other offshore discoveries.

Ultimately, offshore Colombia will be where the future growth is, Roberts believes. Most of that development will be lead by Ecopetrol and its partners.

It will also postpone plans to modernize its Barrancabermeja refinery, meaning the country’s nameplate refining capacity is at about 421,000 bbls/d.

Meanwhile, the state-owned company is intensifying exploration activities and has plans this year to drill a total of 105 wells.

In its 10-year forecast, Fitch points to a deteriorating oil and gas reserve scenario for the country. For instance, it cites an the Energy Information Agency estimate that Colombia has proven oil reserves of 2.4 billion barrels, which is just five years’ worth of supplies at 2016 rates of production.

In an effort to spur offshore oil and gas development, the Colombian government lowered tax rates for companies drilling in some offshore blocks and also exempted producers from the value-added tax.

While the country faces a future of declining oil production and exports, it will continue to produce enough crude domestically to meet the country’s demand for the next decade and beyond, Fitch concludes. That is not the case for natural gas production though.

In fact, Roberts says Colombia experienced a watershed moment last year when it stopped exporting gas to neighbouring Venezuela as the country imported its first LNG. There is now one LNG import facility and another one is being planned.

Last year’s crisis was short term and caused by a drought that affected the volume of hydropower, which is responsible for about 70 per cent of the country’s power.

But long term, Roberts says she believes Colombia will need to import gas from Venezuela while also relying on LNG.

That scenario provides a bright spot for Calgary-based Canacol Energy, which has become the largest onshore natural gas producer in Colombia.

Kevin Flick, vice-president of capital markets and investor relations for Canacol, says the company has signed long-term gas contracts with a large utility in Colombia.

Canacol, which has made four acquisitions since 2008 and now holds interests in 3.3 million acres in Colombia, holds reserves equivalent to nine million barrels of oil and 372 bcf of gas.

It holds interests in four basins, including the Llanos Basin (where much of the country’s oil production comes from), the Lower Magdalena Basin, the Magdalena Basin and the Caguan-Putumayo Basin.

Flick says the company has largely lost interest in unconventional projects and is focused mainly on conventional gas production, which are assets that are not of interest to the supermajors.

“We have said we can’t afford $20-million [unconventional] wells,” he says.

The company has recently announced several successful gas finds and in September it increased its 2016 capital spending from US$58 million to US$92 million, planning to drill three new wells.

The company says it is realizing average gas sale pricing of $5.60/mcf, providing a netback of $4.56/mcf, a margin of 81 per cent. It says gas sales in the later part of this year should reach 18,200 boe/d. That’s an increase of more than 70 per cent from last year.

Canacol says it is targeting more than 100 bcf of new potential recoverable resource. It produces 90 mmcf/d now. About 83 per cent of its blocks are gas-prone.

The company has also become a pipeline owner as it strives to supply waiting coastal gas markets.

It has one pipeline that sends gas north (mainly for its own use) and another that heads south to those coastal markets, delivering 75 mmcf/d.

Flick says the company faces years of certain access to urban Colombia’s gas market, with numerous gas targets in its existing blocks and reduced production from other gas producers.

“About 80 per cent of Colombia’s gas has come from three Chevron offshore fields, which are declining by about 20 per cent a year.”

Canacol is working with a third-party pipeline builder, which would construct a new pipeline to take its gas to waiting markets in the country, he says. That pipeline, which will likely go ahead next year, would transport 100 mmcf/d of gas and add $300 million to the company’s cash flow. Its cash flow is projected at US$135 million this year and US$175 million next year.