This regulated approach has a number of drawbacks beyond the obvious ones of introducing so much herbicide into the environment and the economic costs of doing so. One is that the sterilized end product ultimately doesn’t make ideal soil for the regrowth of boreal forest. If grass was planted, there are other ecological effects to consider.

So NAIT’s Boreal Research Institute (BRI) and ConocoPhillips have teamed up to test an interim reforestation approach at the company’s Surmont SAGD site that could change the way industry stores and maintains its soil.

“We planted a nine-hectare stockpile with trees that will grow into an active forest,” says Amanda Schoonmaker, NSERC Industrial Research Chair for Colleges in Boreal Reclamation and Reforestation. “It’s not permanent reclamation where you put the site to bed, but a temporary reclamation while the company does its oil and gas development.” 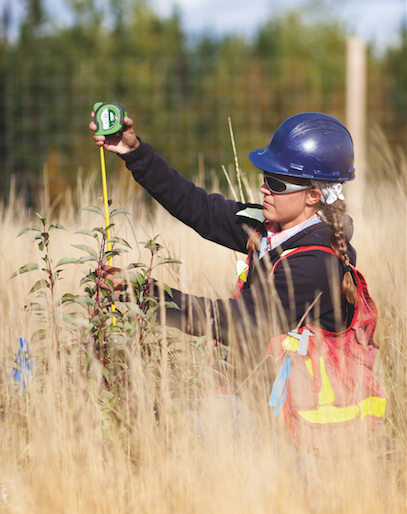 When the time comes for final reclamation, that interim forest will be knocked down and spread over the site, creating a much better medium for boreal forest regrowth. Logs and saplings are a heterogeneous surface that helps capture snow and allows for faster forest regeneration compared to spreading a grass-covered stockpile. Many tree species can be helped from the roots in a reforested stockpile. The soil is also richer in nutrients, and the bacteria and fungi are more aligned with a forest ecosystem.

“That’s one awesome advantage,” Schoonmaker says. “A second and more important advantage is that planting an interim forest creates shade that reduces the growth of weeds, grasses and invasion of non-native species, thereby reducing herbicides application.”

ConocoPhillips’ Albricht expects that planting and maintaining interim forests will be cost-neutral or even save costs for ConocoPhillips compared to current practices. The company plans to share the results of this work with the larger oilsands community

“We’ll have early indications next year,” he says of the site’s four-year-old stockpile that was cleared of grass and planted with trees this spring. “It’s greening up nicely.”

Xu’s research fills a major gap in knowledge in wetland restoration practices. Because peatland is not a particularly productive ecosystem as a source of timber or agriculture production, its role has often been downplayed in policy development and land management, he says.

The most immediate and practical issue for many oil producers in the region is what to do with well pads that are no longer needed in a peatland setting. The clay used to build a well pad is an alien material to peatland ecosystems. Clay is also heavy and compresses the peat on which it sits.

“We looked at other industries—horticultural peat harvesters and researchers—for inspiration and learned from their practices by incorporating a process called the peat inversion–moss transfer,” Xu says.

Inversion involves removing the clay to re-expose the buried peat to create a suitable substrate for the reintroduction of propagules, which are essentially seeds and fragments of moss, the foundational species in peatland.

“It sounds pretty straightforward—get rid of the clay and do something about the peat—but how do you exactly go about it? How do you remove the clay to get a suitable substrate followed by moss transfer? That’s the innovation that we came up with along with our partners,” Xu says.

In roughly three years, the team’s work could lead to the first certifiable reclaimed peatland on a well pad in the province.

As one of Canada’s leading polytechnics, NAIT partners with business and industry on applied research to find relevant solutions to real-world challenges. Our priority is to benefit Alberta’s key industry sectors.

NAIT supports this vital driver of western Canada’s economy through applied research essential to the region’s oil and gas, oil sands, and alternative energy subsectors. This includes our commitment to delivering applied-research solutions that strengthen the sector’s environmental sustainability.