Total announced this week it has partnered with SUEZ to collect and recycle used cooking oil collected throughout France. As part of a 10-year deal, SUEZ will supply 20,000 metric tonnes of used cooking oil a year to be processed into biofuel at Total’s La Mède biorefinery.

The agreement comes in response to growing demand for biofuel, said Total, which is transforming its La Mède site into France’s first biorefinery, one of the largest in Europe. The facility will produce biodiesel by refining used cooking oil, residual oil and vegetable oil. The high-quality biodiesel can be blended into regular diesel in any proportion, with no adverse impact on fuel quality or engines, Total said.

The government said the new standards—to be formulated after consultation with provinces, Indigenous peoples, industries and non-governmental organizations—won’t require the use of specific fuels or technologies.

While traditionally policies to promote greener transportation fuels have focused on mandating volumes of specific biofuels that must be used, Lux Research said this week that technology-agnostic carbon intensity measures such as the California Air Resources Board (CARB) Low-Carbon Fuel Standard (LCFS) are changing the game. Renewable diesel and conventional electricity will be the near-term winners, it found, followed by renewable electricity in a close third. 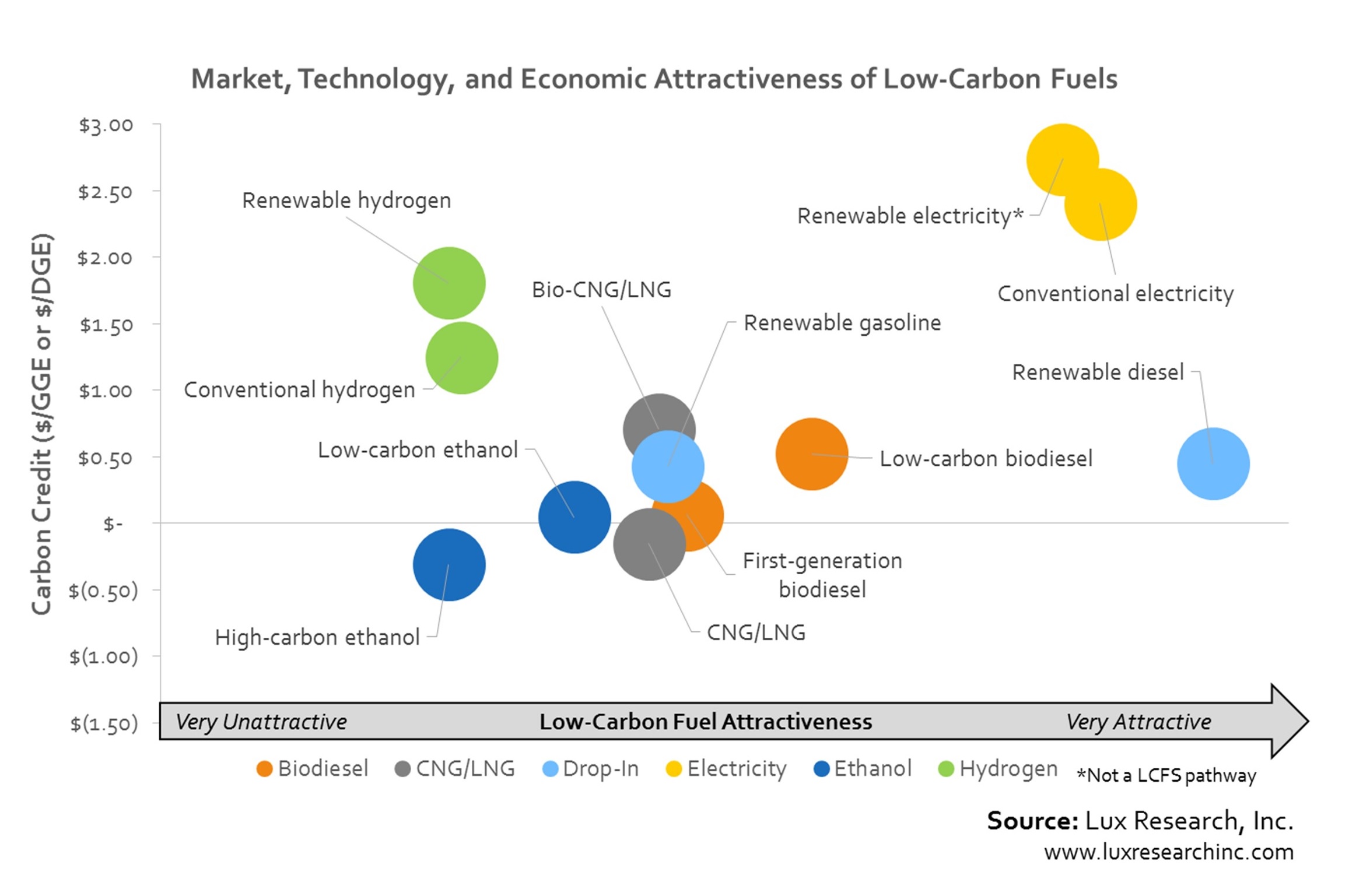 Carbon intensity—the amount of carbon by weight emitted per unit of energy consumed—is driven by factors such as feedstock, process technology and power source, while technology viability is also a factor in the march toward low-carbon fuels commercialization, according to Lux Research.

"Energy companies with diversified energy portfolios are well-positioned to take advantage of this paradigm change, shifting towards renewable sources to reduce carbon intensity values," said Yuan-Sheng Yu, Lux Research analyst and lead author of the report titled, Identifying Winners in Low-Carbon Fuels. "With electricity a near-term winner, pioneers for the 'utility of the future' hold a strong position moving forward."

Lux Research analysts used data from the CARB LCFS to evaluate fuels' commercial, technological and economical attractiveness, based on criteria such as addressable market size, carbon intensity and pathway maturity. Among their findings:

• Waste oil halves biodiesel's carbon intensity. In ideal conditions, biodiesel derived from fats, oil and grease (FOG), has the potential to cut carbon intensity by half. Plenty of FOG-derived biodiesel is projected to be available—up to 2.5 billion gallons per year—and even though processing poor quality waste adds to cost, FOG-based diesel remains a significant opportunity.

At present, 45,000 tonnes a year of used cooking oil are collected in France, out of an estimated total of more than 100,000 tonnes. The partnership will increase amount of used oil collected by more than 20 per cent and improve its conversion through a short energy production loop beneficial for the environment.

“Renewable energies, especially biomass, are a critical adjunct to oil and gas in order to meet demand for transportation fuel while managing carbon emissions,” said Charton.