Respondents to Oilweek's 2017 Oil & Gas Industry Outlook Survey from the midstream of western Canada’s oil and gas industry are the most optimistic heading into 2017, with around 62 per cent expecting either a slight or significant increase in revenues.

Almost 70 per cent expect these revenues to come from investment in new capital projects and new business opportunities, making the midstream by far the most optimistic sector in the industry.

Almost half said their top priority for free cash flow is investing in growth projects.

Inter Pipeline is an example of where the midstream in Canada is headed.

Inter Pipeline is also assessing the commercial viability of constructing an additional processing facility, which would convert propylene into polypropylene, a high-value, easy to transport solid plastic used in manufacturing a wide range of finished products. The preliminary estimate for the polypropylene facility is approximately $1.3 billion.

“You literally just create plastic pellets that you put in...cars and trundle down the track to whatever market you’re trying to seek, versus propylene which is a liquid and requires special handling procedures. We’re actually still looking at both and we’ll make a decision as to whether or not we want to move forward with an integrated PPPDH [polypropylene dehyogenation] plant or just a PDH plant, but certainly our base case is an integrated PPPDH plant now,” says Bayle. 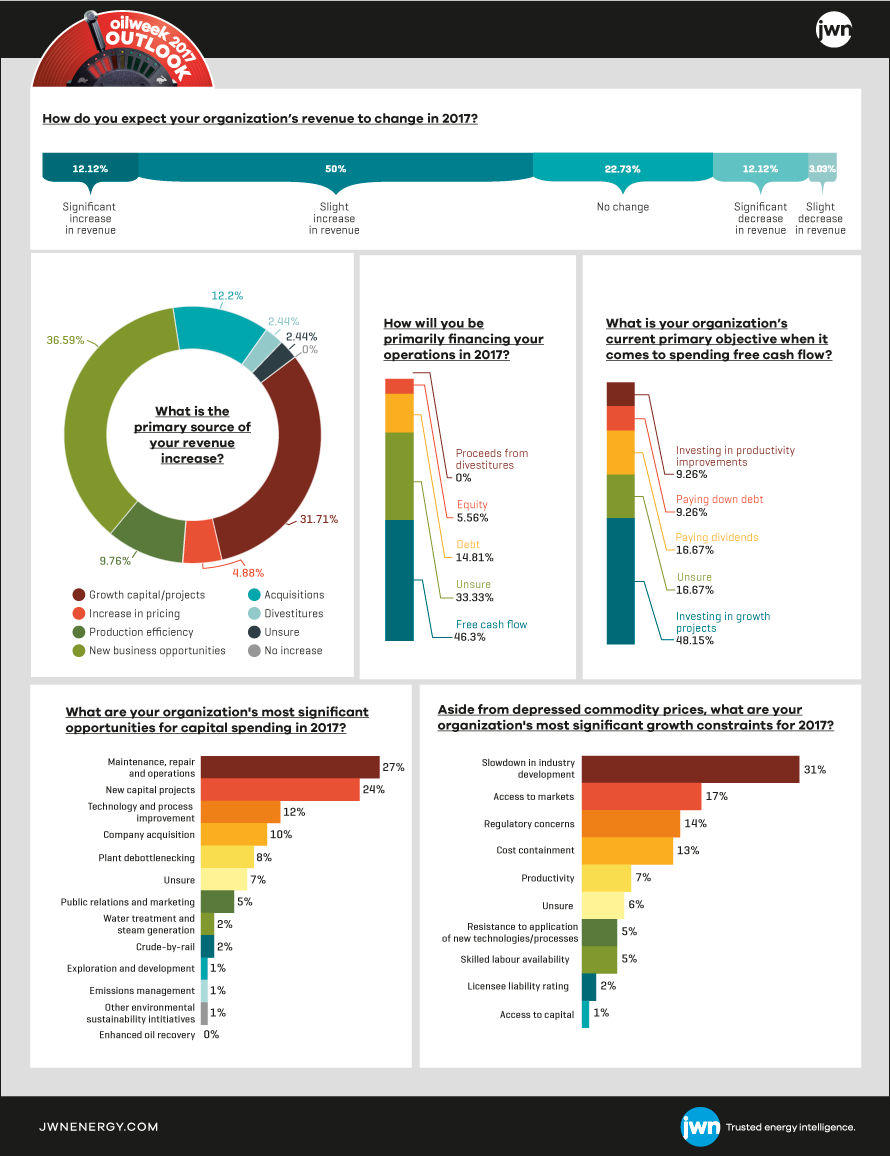 Inter Pipeline is currently pursuing long-term, fee-based off-take agreements with several global plastics manufacturing and marketing companies. Subject to securing appropriate commercial contracts, Inter Pipeline expects to make final investment decisions on both facilities by mid-2017, and to have them operational by mid-2021.

Pembina Pipeline is also looking to leverage propane supplies into a downstream business. However, Pembina is taking a unique approach to the potential development of a petrochemical business.

A feasibility study on the development of a combined PDH and polypropylene upgrading facility in Alberta has raised the possibility of a lump sum turnkey project, Mick Dilger, president and chief executive officer of Pembina said.

That construction approach is something that hasn’t been seen in Alberta for a long time, Dilger said in a conference call to discuss third-quarter 2016 results. “If that were to come to pass, someone would build that at a pre-agreed cost and henceforth ourselves and K.S.C. [Petrochemical Industries Company], would no longer take the capital cost risk.”

Pembina and K.S.C., a subsidiary of the Kuwait Petroleum, have completed their detailed technical, financial and commercial study and are jointly evaluating the study findings.

In the third quarter, Pembina closed the purchase of approximately 2,200 acres of lands in the Alberta Industrial Heartland to the northwest of Pembina’s existing Redwater facilities for $60 million. The company plans to use the lands for future strategic fee-for-service infrastructure development, such as additional fractionation and associated services, and is also considering the land, along with the company’s Heartland site, for use in association with its potential PDH and PP facility.

The commercial start up in early July of AltaGas’s $430-million integrated midstream complex at Townsend, B.C., offers significant potential for the midstreamer to leverage its footprint in the area, says president and chief executive officer David Harris.

“These facilities are the first major step with our northeast B.C. strategy,” he says. “With one of the only major modern gas processing facilities there, we have significant competitive advantages to offer further capacity for producers in the region.”

AltaGas has already had significant discussions with producers about the potential for a deep cut facility and “we certainly see the ability to double our [198 mmcf/d shallow cut] Townsend facility before the end of the decade,” he says. “Based on our current views, we expect we could eventually get to one bcf/d of processing capacity in the region.”

Harris says AltaGas has significantly advanced the development of its Ridley Island propane export terminal at Prince Rupert, B.C. with the multi-year offtake agreement with Astomos Energy, setting out key commercial terms for the sale and purchase of liquefied petroleum gas.

Under the terms of a contemplated multi-year agreement, it is anticipated that Astomos will purchase at least 50 per cent of the up to 1.2-million tonnes of propane available to be shipped from the export terminal each year. Active commercial discussions are continuing for additional capacity commitments.

AltaGas has begun the formal environmental review process for the project. Preliminary engineering and the FEED study have been completed and further capital optimization opportunities are currently being addressed.

Although the Astomos offtake would be enough for the export terminal to proceed, AltaGas also is looking for agreements with producers, says Harris, who suggested it is an attractive proposition for producers because it offers the potential for higher netbacks associated with Asian markets.