Financial results speak volumes about the quality of a company at the best of times but especially so during distressed times in commodity price cycles. And while the midstream sector as a whole has weathered the storm better than some other parts of the industry, this year’s Oilweek Supplier of the Year, AltaGas, is thriving.

It posted a record second-quarter normalized EBITDA, jumping 43 per cent to $153 million from $107 million a year ago. It also grew its normalized funds from operations by 68 per cent to $114 million ($0.75/share) from a year ago and even upped its dividend to shareholders while other companies scrapped theirs.

Part of this success is effective geographic and business diversification to smooth out the lumps in the economy. Since 2010, when AltaGas shifted into more robust growth, it has managed to effectively balance its revenues across three business segments: natural gas gathering, processing, storing and marketing; power generation; and utilities infrastructure. Revenues from its suite of diversified assets are further divided almost equally between Canada and the U.S.

In western Canada, AltaGas is mostly known for handling about two bcf/d of natural gas (on a transactional basis), but its power generation throughout North America is now tipping close to 1,700 megawatts, including approximately 400 megawatts of renewables generated by hydro, wind, solar and biomass.

More fundamental than diversification to AltaGas’s success is its approach to the service provider-client relationship.

“AltaGas is at the forefront of offering western Canadian producers access to new markets, including Asia, through our northeast British Columbia strategy and our energy export strategy,” says AltaGas president and chief executive officer David Harris. “We need to think differently and offer producers more than just take-or-pay-type contracts. We have to think about alliances, relationships, areas of mutual interest, how we can help producers lower their costs and achieve higher netbacks for their products.”

Over the next five years, AltaGas is well positioned to grow its three business segments and expand its ability to provide clean, affordable energy to more customers across North America.

In western Canada, AltaGas is working closely with producers to further develop the region’s world-class natural gas reserves. It is investing in gas processing and export infrastructure to provide new market options for producers’ products.

Earlier this year, AltaGas’s $430-million integrated Townsend midstream complex was completed ahead of schedule and under budget in northeastern B.C. The complex includes a 198-mmcf/d shallow-cut natural gas processing facility, a gas-gathering line connecting AltaGas’s Blair Creek field gathering area to the Townsend facility and two liquids egress lines that connect to a new truck terminal on the Alaska Highway.

Project planning is also underway for the North Pine Liquids Separation project and the proposed Ridley Island Propane Export Terminal (currently in late-stage development slated for the Prince Rupert, B.C., area). The $190 million to $210 million proposed North Pine project will be connected to existing infrastructure in the Montney region, including the proposed $400 million to $500 million Ridley Island terminal. AltaGas expects to reach a final investment decision for both projects in late 2016 with operations starting in the second half of 2018.

In the state of Washington, AltaGas is part owner and operator of the Ferndale Terminal, which ships propane and butane to Asia. Ferndale is the only liquefied petroleum gas export facility on the North American west coast. Operating this facility has provided AltaGas the confidence and expertise to pursue ambitious ventures such as the Ridley Island Propane Export Terminal.

“Not only are we finding better ways to structure commercial deals and lower costs for producers, but through our proposed Ridley Island Propane Export Terminal, we will be able to offer producers access to new markets like Asia,” Harris says.

“Our northeast B.C. strategy and our Ridley terminal facility will provide new solutions for producers in the liquids-rich Montney and change the way this industry has worked for the last 50-plus years—which is sending products to Fort Saskatchewan to eventually reach eastern markets or the U.S. For years, this has been the only viable solution. Today, we can no longer depend solely on these markets.” 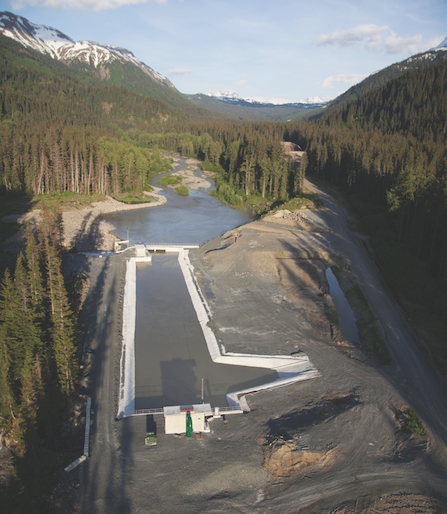 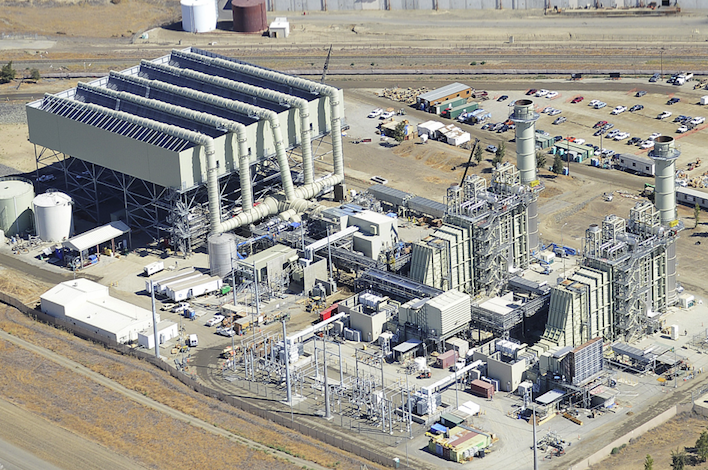 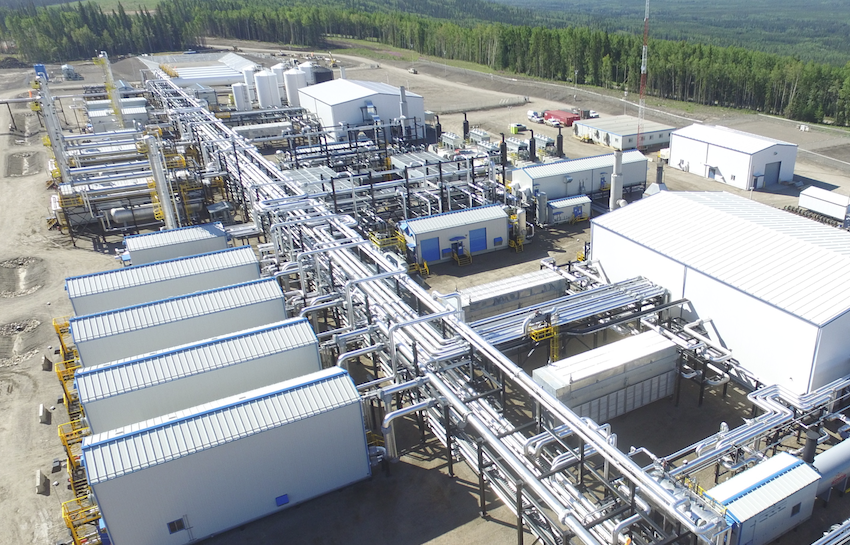 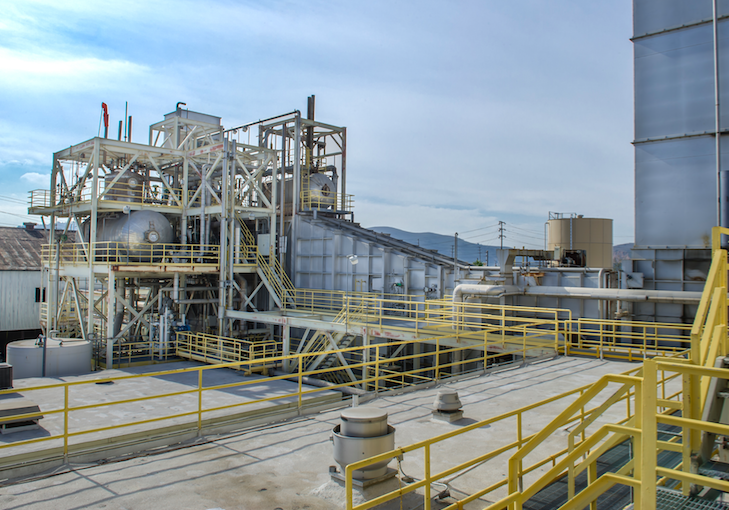 The Pomona gas-fired plant in California has capacity of 45 megawatts. Image: AltaGas 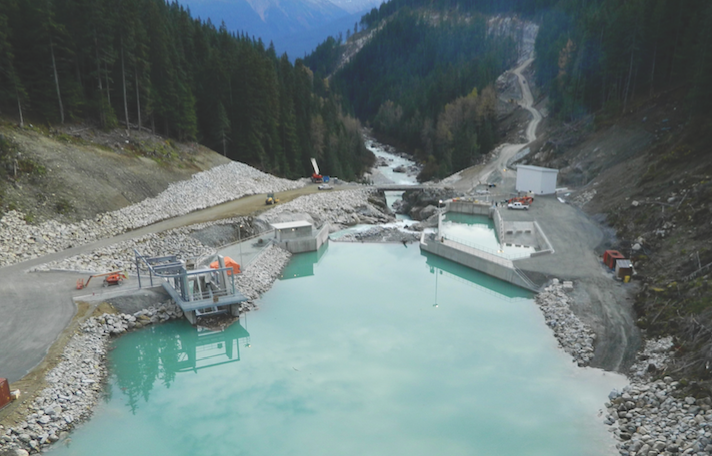 McLymont Creek Hydroelectric Facility is a 100 per cent-owned AltaGas plant in northeastern B.C. that produces 66 megawatts of power. Image: AltaGas 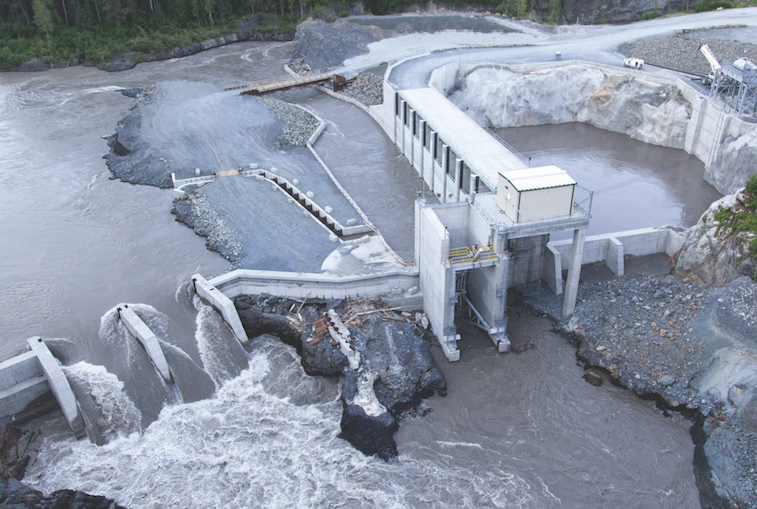 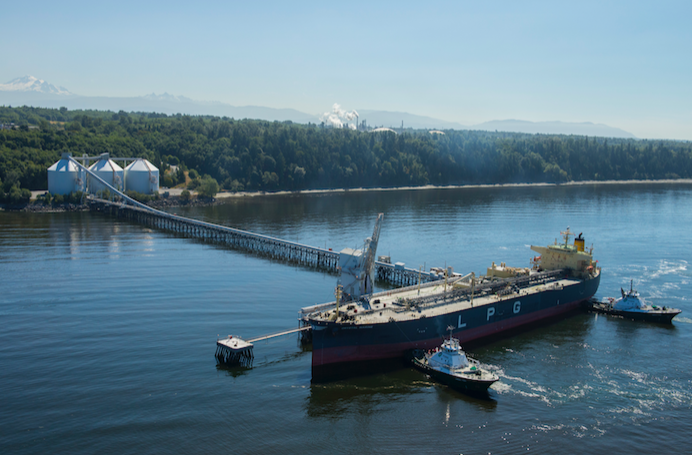 AltaGas operates the Ferndale Terminal near Ferndale, Wash., as the only existing and operating LPG export terminal on the West Coast of North America. Image: AltaGas 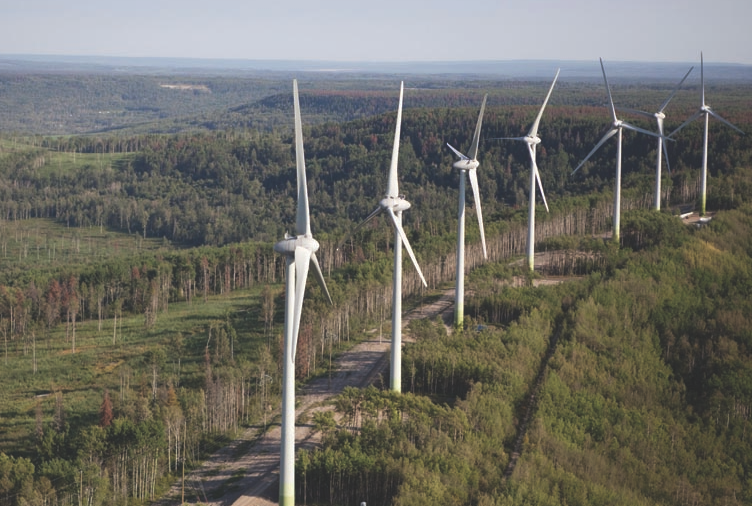 “Captain of industry,” “steering the ship” and other nautical terminology isn’t something you’ll hear from Harris. That would just be awkward coming from a commander in the United States Navy.

Harris continued the family tradition of military service (his father served in the navy in the Second World War) when he decided to study at Worcester Polytechnic Institute outside of Boston under a Naval Reserve Officers Training Corps scholarship. That scholarship earned him a double degree in nuclear and mechanical engineering and the rank of commander in the United States Navy.

As a Commander, 23-year-old Harris immediately took responsibility for a division of 20–30 people. “There was no grooming period,” Harris says. “You hit the deck plates running and you either sink or swim.”

He would spend the next five years in active duty and then nine years after as a reserve. His biggest takeaway from those years at sea was that a leader’s responsibilities outweigh his privileges. It’s a lesson that would serve him well later in life as he took leadership positions in business, but his formative years were grounded in engineering, initially with an engineering, procurement and construction company and later with Florida Power & Light, Duke Energy, Fluor and Exelon, where Harris got a taste of world-class operational excellence and exposure to the financial side of business. He joined AltaGas in 2010.

In his current role as chief executive, Harris continues to view his leadership through the lens of service and responsibility. “I look at employees as me working for them,” he says. “I’m there to provide them the resources and the guidance [for them] to turn around and grow the company and position it down the road for success.”

That ethic trickles down throughout AltaGas’s ranks of 1,700 employees and connects with the corporation’s approach to working with customers in order to make them successful.

“I like to hire attitude,” Harris says. “The intellectual property is already there, otherwise you don’t even get a chance to get to the door, but what really matters is chemistry. So attitude and chemistry. And then you look to really balance that, find the right people for the right positions at the right time to get everybody doing their job effectively and working cohesively with one another. That’s the key to success in any organization.”

Beyond executive strategy, beyond diversification and AltaGas’s commitment to customer success, the company underwrites its future by attracting and developing the right people. People come to AltaGas at all levels and ages, and they need to see a viable career path within this dynamic and active company. That means giving young employees room to grow and even make mistakes.

As AltaGas moves into the future, Harris still sees continued opportunities for midstream growth in western Canada. Its willingness to share in the value chain, its vision for new markets, its construction expertise and its use of low-cost capital to help customers be more competitive should all keep the momentum going.

The U.S. also holds tremendous opportunity for AltaGas, Harris says. He expects the company to continue growing by picking its spots at the right time and by keeping with its one-third/one-third/one-third approach to revenue generation.

Acquisitions may be a part of that expansion but so will the expansion of capacity and capability within existing facilities.

An example is its recent signing of a 10-year energy storage agreement with Southern California Edison at its Pomona, Calif., facility where AltaGas already has a 45-megawatt natural gas–fired cogeneration facility. At Pomona it will build, own and operate 80 megawatt-hours of discharging capacity (20 megawatts of battery storage over a continuous four-hour period) at an expected cost of US$40 million to US$45 million, making it one of the largest battery storage projects in North America when it comes online in December 2016.

When AltaGas targets assets for acquisition, it looks for power assets in good load centres, but it also looks for assets that provide the flexibility to turn them into what Harris calls hybrid power centres.

“It’s where you have traditional combustion turbines maybe with some batteries, or if we wanted to create a larger-scale energy centre, you could see solar and battery in combination with combustion turbine or even wind—that’s the type of market that is starting to emerge,” Harris says.

Earlier this year, AltaGas and its consortium partners halted further development of the Douglas Channel LNG project due to unfavourable economic and market conditions. The combination of low oil prices (oil prices underpin LNG prices) and massive new LNG export capacity coming online in Australia and the U.S. has all but squashed Canada’s nascent LNG industry, which includes some 20 or so proposals for B.C’s west coast alone.

“I’ll just be direct,” Harris says as he launches into a topic that’s close to his heart. “We need to turn around, make this a priority for Canada and put our shoulders behind it as a nation, and say, ‘We need to get this done.’ We learned a tremendous amount with the Douglas Channel project, and we were 90 per cent of the way there. We understand the markets, we have community and First Nations support, and we have an existing pipeline. If the markets turn, we are ready.”

Agency to vote on fracking ban near Delaware River